In the ripeness of the Canadian summer the agony of Brazil seems far removed. Yet that troubled nation’s astronomical debt is a time bomb that could shatter our fragile recovery and send the world economy into a tailspin.

At the core of the emergency rescue effort being mounted by 1,400 creditor banks is a quiet Canadian who is gaining an international reputation as the Scarlet Pimpernel of high finance. Bank of Montreal Chairman William D. Mulholland was largely instrumental in setting up the new economic subcommittee of a shadowy organization known as the Advisory Group on Brazil, cosponsored by Citibank, Morgan Guaranty Trust and Lloyd’s International, among others. Mulholland, who also sits as the group’s Canadian representative, is now in charge of advising the Brazilians on what to do if they want to avoid defaulting on their $90-billion (U.S.) debt—-the Third World’s highest.

Mulholland’s concern is not exactly altruistic. The Bank of Montreal has lent Brazil more than $1 billion (the Royal Bank and the Scotia are in jeopardy for only slightly smaller amounts), and Mulholland also runs one of the major banks in Rio de Janeiro (Banco de Montreal Investimento S.A.—assets 23 billion cruzeiros). While the Canadian exposure is serious, the problem of the U.S. banks is much more pressing: by the end of 1982 the nine biggest U.S. banks had more than $13 billion out on loan to Brazil—an astonishing 46 per cent of their total capitalization. According to Morgan Guaranty Trust, nearly 30 Third World countries are now in arrears to their creditors, desperately negotiating stretch-out arrangements with banks, while another 10 nations (with debts totalling $40 billion) face serious balance-of-payments problems which could swing them over into the first category. The external debt of non-oil developing countries is currently estimated at $648 billion— and rising.

But no single state is stretched further than Brazil. In a series of moves to stave off economic flaps, the International Monetary Fund and the Swissbased Bank for International Settlements have been rolling over Brazil’s long-term obligations while six leading U.S. banks have covered the short-term exigencies. But the rescue efforts are being hampered by what Mulholland calls “the classic liquidity problem of

people trying to get out,” with many private bankers refusing to renew loans for the $3 billion that Brazil requires this year just to keep up with the interest.

Mulholland admits that the only weapon he really has on his side as chief go-between of the world’s banking community is moral suasion, though he recently spent a week in Brazil and plans to return in September. “It’s really an exercise in information gathering, coordination and negotiation,” he says.

“We’re using the same structure as we did in the Mexican crisis and, while all of that country’s problems aren’t solved, at least we’re no longer lying awake at night worrying about it.”

It was Mulholland’s success in dealing with the Mexican fiscal emergency last year that brought him to the fore in the Brazilian situation. “The issue isn’t paying off the debt,” he says of both countries. “The issue is managing the debt. Shortand medium-term in-

struments are hardly ideal, but it’s all we’ve got to do the job. Unlike national markets there is no machinery for providing last-resort liquidity. That’s what we must get. The solution for this kind of problem is too important to be left to good luck.”

The Brazilian economy makes Canada look like a fiscal utopia. Brazil’s current inflation rate is 127 per cent (up from 99.7 per cent in 1982); unemployment is running at 20 per cent; even the coffee crop was hit by early frost which reduced harvests by 51 per cent. The government is virtually unable to implement its own monetary policies, and 24 opposition members in the Brazilian parliament are on record as favoring a “unilateral moratorium” (in other words default) on the national debt. The New York Times estimates that there are 160,000 street pedlars in Rio and Sâo Paulo alone, most of them former white-collar workers.

The immediate problem is that on top of its horrendous economic situation, Brazil is attempting a gradual political liberalization program called abertura, the Portuguese word for “opening.” Free elections have been held for state governors, and an indirect presidential vote is planned for January, 1985, which is expected to give the country its first democratic government since the armed forces seized power in 1964. This is the reason that politicians are hesitating to apply the austerity measures that the international banking community is demanding.

One of the few international bankers actually to set foot in Brazil, Mulholland views this chaotic scene with characteristic calm. “They’re going through a pretty rough patch all right,” he says. “The biggest question is the degree to which Brazilians can marshal public opinion to support the necessary economic measures.”

A former Wall Street merchant banker who once served as a captain in the U.S. Army, Mulholland finds himself a key player in the race to protect the integrity of the world’s financial system. “We will muddle through as we have before,” he predicts. “I use the term not to be amusing but because the process is untidy and by its very nature doesn’t lend itself to crisp, well-defined progression. We’re handling financial problems that have not happened in this generation, anywhere. I don’t think that we’re so dumb that we cannot learn by it or so smart that we cannot profit from it.” 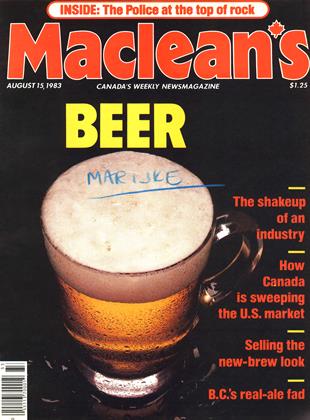