When Polish leader Gen. Wojciech Jaruzeiski lifted martial law on July 27, he declared that the nation could plan on an extended period of tranquillity. But last week Jaruzelski’s government was again bracing itself for a tense confrontation with underground trade unionists. In a series of mass demonstrations in Gdansk, organizers of the banned trade union Solidarity served notice that they have not vanished and they issued an ultimatum to Jaruzelski. Union leader Lech Walesa demanded that the government reopen negotiations on the formation of free trade unions or face the consequences of renewed protests and work slowdowns. Then, at the historic monastery of Jasna Gora, thousands of pilgrims attending last week’s Feast of the Assumption celebrations draped the walls of the shrine with Solidarity banners.

For its part, the government reacted swiftly to the public show of defiance. Interior Minister Lt.-Gen. Czeslaw Kiszczak hastily banned all assemblies and demonstrations in the Gdansk area for a month. At the same time, officials set up a special court to punish anyone who defies the prohibitions. The government’s authority to ban or control public gatherings is contained in new legislation passed last month which, in effect, enshrined many of the powers that the military authorities used to enforce martial law.

A clash with Solidarity supporters seemed virtually inevitable. For one thing, Jaruzelski is anxious to convince his Eastern Bloc allies that his regime has regained control over a defiant nation. Indeed, during a state visit to Warsaw last week by East German leader Erich Honecker, Jaruzelski assured Honecker that both Solidarity and Walesa were relics of a tumultuous past. Honecker, a vociferous critic of Solidarity, was prepared to discuss a closer integration of the East German and Polish economies. And observers noted that because of the severity of Poland’s economic crisis Jaruzelski cannot afford to risk jeopardizing the German offer by appearing to soften his opposition to dissent.

Still, Jaruzelski must reconcile outside pressures with those of an increasingly restless Polish public. Martial law, coupled with economic disruptions, has exacted a heavy price in human terms. One family in six now lives below the poverty line, alcoholism is rife, and in Warsaw alone there are 6,000 officially registered heroin addicts, more than double the number from Solidarity’s heyday. As Poles prepared to observe next week’s third anniversary of the signing of the Gdansk Agreements, organizers were mapping out a protest strategy. The uneasy quiet in Poland that followed the lifting of martial law may be about to end. 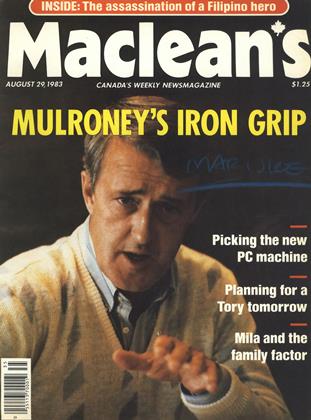