No one knows the exact number of Canadians who fought with U.S. troops in the Vietnam War from 196k to 1975. Although estimates are as high as 20,000 men, the real figures reside in countless boxes of records on Vietnam veterans. The Washington ojfices of the U.S. Army Records Management alone have 60,000 boxes of unsorted records. R is known, however, that 56 Canadians died fighting in Vietnam, and for some who returned the horror of Vietnam is still a daily reality. Although many veterans picked up the pieces of their former lives and looked ahead, for others, sleep disturbances, blackouts, survivor’s guilt, depression and isolation are daily features of life back in Canada. The personal stories and the extent of Canada’s involvement in the war have only recently come into clearer focus. Maclean’s correspondent Doug Clark reports:

Gordon Day, a 41-year-old Montrealer, recalls the day in 1981 when the horror of his Vietnam stint came back to haunt him. He was in a bar in Montreal. A friend with whom he had been drinking had suffered an epileptic seizure and passed out on the floor. Day immediately commenced cardiopulmonary resuscitation. Suddenly, he looked up at the assembled faces surrounding him and screamed: “Where the hell are the choppers? The God damn choppers should have been here by now.”

According to psychiatrists who have

studied the effects of Vietnam on returning veterans, Day had a classic “flashback.” Momentarily, in his mind, he was again kneeling in a Vietnam rice paddy, clutching a wounded buddy who was dying in his arms. When the ambulance attendants finally arrived, Day was ready to go one step farther: he stood poised with his knife, ready to perform an emergency tracheotomy in order to get air into his friend’s lungs. Help for people like Day is only starting to become available in Canada. Although since 1979 U.S. soldiers have had access to a readjustment counselling program to help ease their transition to civilian life, Canadian Vietnam veterans who returned to Canada neither had access to similar programs nor could they even find one another.

One of the catalysts is John Leavey, 38, managing director of the 100-member Canadian Veterans of the U.S. Armed Services, himself a Vietnam veteran. For the past 10 years Leavey has struggled to find Canadians who fought in Vietnam. In June, however, Leavey made his first real gain—by getting the U.S. Veterans’ Affairs administration to acknowledge his organization. As well, in Montreal Jack Kusiewicz and Virgil Prater have just begun a Vietnam Veterans’ Outreach Program, which has been endorsed by the Disabled American Veterans (DAV) centre in White River Junction, Vt. Leavey’s main purpose is to get the full “VA menu” of benefits for Canadians in Canada. That package includes educa-

tional benefits, survivor benefits and low interest rates on real estate purchases, which are now extended to all veterans in the United States. Although Leavey, who fought in Vietnam from June, 1966, to October, 1967, admits that, for many, emotional problems were the inevitable result of the return to normal life, he is trying to lessen the image of the Vietnam veteran as a “walking time bomb.” Said Leavey: “The vast majority of Vietnam veterans landed with both wheels on the runway.” Kenneth Slater, a 35-year-old senior warehouseman from Bramalea, Ont., is one Canadian who returned without regrets. Slater, who served from 1968 to 1971 as a helicopter door gunner for the Army Air Corps, refers to Vietnam as “an experience of a lifetime.” Although his helicopter was shot down several times, Slater has not been plagued by subsequent nightmares or anxiety. He is now married with a 10year-old daughter and he fondly remembers the way he was treated by the U.S. government after he left the army. “They gave me the opportunity to complete my Grade 12, and I took one year at college,” he says. “They were super.” The motives propelling so many Canadians to serve in Vietnam are widely divergent. According to Leavey, it was a combination of “universal and personal” reasons. First, he said, the Canadian desire to fight for Old Glory stemmed from childhood exposure, through American books and movies, to the military tradition of the United States. “Americans have the ability to generate heroes out of the boy next door,” says Leavey. “And they maintain the belief that ‘good’ is worth fighting for.”

Gen. Jacques Dextraze, 63, former Canadian chief of defence staff between 1972 and 1977, agrees with Slater’s assessment. Dextraze’s 21-year-old son, Richard, was killed by a grenade blast in Quang Tri province in April, 1969, while serving with the U.S. Marines. “It may sound corny coming from a 20year-old fellow,” says Dextraze, “but he told us: T want to do my share. When I come back I will feel like a better man. I will feel I have contributed.’ ”

Enlisting in the U.S. Armed Forces was relatively easy for Canadians. For most it was simply a case of getting residence status in the U.S. and then providing a passport and a visa at a U.S. recruiting office. Some Canadians actually were drafted. In the summer of 1968 Peter Curtis, now a farmer near Belwood, Ont., worked on a farm in New York state. In the fall, when he came home to resume classes at Orangeville High School in Ontario, he received his draft notice in the mail. “When you worked in the States you signed a form saying in case of national emergency you were eligible for the draft,” Curtis explained. “What they didn’t tell you was that Vietnam was considered a national emergency.” Keith Cunningham, of London, Ont., says that in Vietnam it was common for Canadians to seek one another out and that some units were totally comprised of Canadian personnel. Cunningham, who was drafted by the U.S. Army after marrying an American, volunteered for the Rangers and eventually dubbed his squad “Canuck’s Commandos.”

One reason that Canadian morale was often high in Vietnam was that many volunteers like Cunningham applied for “elite” units. Jack Burman, of Kingston, Ont., flew assault helicopters in A Company of the 227th Assault Helicopter Battalion. Wounded three times, once seriously, he earned seven decorations for valor and 21 air medals.

Not all Canadians who fought look back longingly. Since returning from Vietnam in 1969, Montreal’s Andrew Montour has suffered from what he believes are the debilitating effects of Agent Orange, the chemical defoliant that was used in Vietnam. Montour is losing hair and parts of his moustache. His son was born severely handicapped. “Somebody, somewhere, owes me something,” says Montour angrily.

Montour, Leavey, Prater and Kusiewicz share the problem of locating other Vietnam veterans spread across Canada. Any assistance would be welcomed by them and by men like Day and others who have still not fully recovered from the trauma of Vietnam. Says Day: “You can’t cry anymore. There are tears, but you just don’t cry.”

With Shona McKay and Jane Mingay in Toronto. 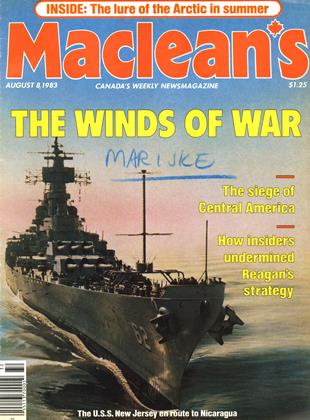