Miles apart in three carefully chosen conference rooms, the caucuses of the Liberal, Conservative and New Democratic parties meet behind closed doors this week to plot their strategies for the resumption of Parliament next week. Conservative Leader Brian Mulroney, triumphant in last week’s resounding byelection win in Central Nova, faces his colleagues at a secluded ski resort 85 km north of Ottawa. Prime Minister Pierre Trudeau, on the other hand, in a deliberate effort to restore a measure of calm and normalcy to his anxious party, faces his caucus in the usual place—Room 308 in Parliament’s West Block. And the New Democrats, after a devastating defeat in British Columbia’s Mission-Port Moody byelection, are fleeing the spotlight to hold their caucus in the seaside town of Liverpool, N.S., where an embattled Ed Broadbent will likely discuss his future as leader with his 30 colleagues.

The fall sitting of Parliament promises plenty of drama. Mulroney will clash head to head with Trudeau for the first time. Hopefuls in the upcoming Liberal leadership race will be jockeying for attention. And all three parties

will hint at their platforms for the coming election.

Indeed, as Brian Mulroney said a thankful goodbye last week to the voters of Central Nova, the political pulse of the nation accelerated. Trudeau moved back into the spotlight after 2lh weeks of vacation with his sons in the Greek Islands. At a press conference in

Athens, he hailed Mulroney as a formidable opponent and challenged him to present the nation with his “fresh new ideas.” On the issue of his own increasingly questioned leadership, the Prime Minister remained tight-lipped, admitting only that he senses a malaise within the Liberal party. Meanwhile, Broadbent faced increasing calls, from within his own party for a review of his eight-year leadership (following story).

For Mulroney, who breezed into Ottawa 23 hours after capturing 60 per cent of the 31,394

votes cast, the week was a whirlwind of cheering crowds, brass bands, hurried meetings and the happy inconvenience of moving into the Opposition leader’s office. The rookie parliamentarian’s honeymoon showed no signs of ending. The voters of Central Nova gave him an even larger majority than that of Elmer MacKay, the 12-year incumbent who

gave up his seat for the new leader. Under cascading balloons and amid cheers, Mulroney, flanked by his wife, Mila, told exuberant supporters who crowded his campaign headquarters, “There is no longer any such thing, ladies and gentlemen, as a safe Liberal seat anywhere in Canada.”

Just four hours later another Tory byelection win 6,300 km away in Mission-Port Moody may have proven that there was no safe NDP seat either. “This is a great day for Canada,” Conservative victor Gerald St. Germain, a 45-year-

old poultry farmer, told 600 supporters. “We are on our way to ridding ourselves of those arrogant Liberals east to west.”

His first run for Parliament successfully completed, Mulroney wasted no time setting up shop in Ottawa. The day after he arrived, Mulroney appointed his personal staff. The next day he named a new party executive and a new fund-raising team. After pausing for

the Labor Day weekend, he planned to tackle the even more delicate task of selecting his frontbench team of “shadow” ministers. Mulroney’s choices attested to his famed skills as a mediator.

His plan called for an inner circle consisting of two of his leadership rivals, two high-profile supporters of former leader Joe Clark, one of his own loyalists and Deputy Leader Erik Nielsen. He also planned to give almost every caucus member an assignment and a title.

Politically, Mulroney’s more interesting choices were the five key parliamentary spokesmen. Unless he changes his mind, Maclean's has learned, the inner circle will include Mulroney’s leadership rivals John Crosbie and Michael Wilson as the party’s prime economic spokesmen; Clark loyalists Harvie Andre and Donald Mazankowski in Energy and Transport respectively; and Sinclair Stevens, the only Mulroney leadership backer in the group, as external affairs critic. Stevens’ occasionally strident right-wing statements made him an unlikely choice in the eyes of many party moderates, and Andre’s fiercely partisan loyalty to Clark made his appointment a surprise.

After choosing the five key parliamentary players, Mulroney faced a

comparatively easy task. He has to fill a host of second-string positions—including 30 still vacant shadow cabinet positions and 35 newly created deputy critic postings. As well, Mulroney is selecting six more MPs to chair a series of policy task forces with business and labor representatives which will travel across the country.

erals not to be “spooked” by Mulroney, there is no disguising the fact that the governing party is dispirited and terrified. Party dissidents, unhappy with Trudeau’s leadership, will have their chance to confront the Prime Minister directly—if they dare—with their complaints when he arrives back from Greece for this week’s caucus. Caucus Chairman Gilbert Parent of St. Catharines, Ont., a Trudeau loyalist, doubts that anyone will challenge Trudeau. “I’ve been through several of these socalled uprisings in my nine years as an MP, and they just don’t come up at caucus,” he said. Trudeau gave no hint of his intentions when reporters broached the subject at last week’s press conference in Athens. When asked to comment on published statements by one of his senior aides that he planned to re-

tire before Christmas, Trudeau said: “Could you tell me the name of the adviser who said that? Maybe I could comment on his resignation.”

The stated purpose of this week’s Liberal caucus meeting was to prepare the government for Parliament and a Throne Speech, expected in mid-autumn. Among the issues on the agenda were how the government and the private sector should share the burden of

creating jobs for the nation’s 1.4 million unemployed; the need for a program of industrial revitalization; and how to advance the Liberal stance on medicare and other social programs.

As they look to their collective future, the Liberals are not without hope. Their private polls show that Mulroney is vulnerable. According to their research, close to 30 per cent of the population perceives the Tory leader as untrustworthy. As a backroom Liberal put it, “He does have an Achilles heel.” The trouble is that Trudeau and his most visible potential heir, Toronto lawyer John Turner, received equally bad ratings.

The Liberals may search for salvation in an entirely new political figure. And recently one name has continued to percolate through the ranks—that of Montreal businessman Paul Martin Jr., 45, son of the well-known former cabinet minister and diplomat. The president of Canada Steamship Lines, Martin is a bilingual, widely read lawyer who is impressive on a podium and a longtime backroom Liberal. His main problem is lack of exposure. “And I’m not even sure that’s a drawback,” said one of Matin’s boosters. “It’s probably better to have no association with this government.” Interestingly, Martin’s

credentials are almost a mirror of Mulroney’s. But even his most enthusiastic promoters see Martin as a man to keep an eye on one election down the road— not this time.

Mulroney is still the man most Canadians are watching as Parliament resumes. Three months ago he won the Tory leadership in a steamy hockey rink. Last week he celebrated a byelection victory in a converted grocery store. Now he takes his place in the august green Commons chamber. The Liberals and New Democrats are hoping that he will stumble, his colleagues are counting on him to shine, and the country is quietly taking stock of the new boy in the Centre Block. 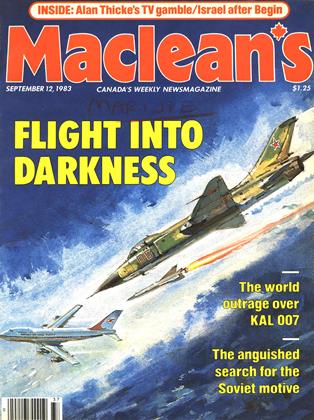