U.S. Secretary of State George Shultz rarely shows such rage. The normally unflappable Shultz emerged from a meeting with Soviet Foreign Minister Andrei Gromyko in Madrid last week and denounced as “preposterous” and “totally unacceptable” the Soviet Union’s official explanation for its Sept. 1 downing of Korean Air Lines Flight 007. Furious at Moscow’s continuing refusal to apologize for the murder of 269 people aboard the Boeing 747 and to offer compensation to their families, Shultz cut short his twohour parley with Gromyko, declaring, “Further discussion would not be productive.”

The diplomatic freeze was the focal point of a week of dramatic reverberations from the airliner tragedy. The body of a young child was found by a Japanese fishing boat near the crash site of the downed airliner, and quantities of wreckage, apparently from the aircraft, were washed up on the shores of northern Japan. In Seoul more than 100,000 mourners packed a stadium for a memorial service for the 269 airline victims. And in Ottawa, External Affairs Minister Allan MacEachen gave the Soviet Embassy formal notice that Canada is seeking financial reparations for the families of the 10 Canadian victims aboard the ill-fated flight. At the United Nations, U.S. Ambassador Jeane

Kirkpatrick played audio tapes of three Soviet pilots’ conversations with their ground stations. In the hushed Security Council auditorium, the terse, sometimes impatient words of the pilots left no doubt that a Soviet interceptor deliberately downed the Korean jet with heat-seeking missiles. Minutes after Kirkpatrick spoke, the Kremlin finally conceded responsibility but claimed that the Korean plane’s route over sen-

In Madrid, addressing the European Security Conference on human rights, Gromyko struck an equally self-righteous note. He contended that Soviet air space was “sacred” and warned that similar punishment would follow other violations of the country’s sovereign borders. In response, a combative Shultz caustically observed: “The Soviet Union defines its security in a way so absolute, self-centred and cynical that it poses a threat to all other countries.”

the Soviet chief of staff and highestranking military officer, told an unprecedented two-hour press conference that pilots had been unable to identify the Korean plane as a civilian aircraft due to darkness and heavy cloud cover. Ogarkov also repeated Kremlin assertions that the plane had turned off its navigational lights, a charge apparently contradicted by the conversation tapes played at the UN, in which Soviet pilots mentioned the highly visible strobe lights as well as the regular navigation lights on the airliner. As well, there was no reference on the tapes to the tracer bullets that the Kremlin claimed one pilot had fired as a warning.

In Washington the state department dismissed Ogarkov’s statements as “hogwash . . . the same old lies.” Spokesman Alan Romberg observed that the Kremlin press conference did not offer tangible evidence of the spy mission charge or of Soviet efforts to force the plane to land safely on Soviet territory. The United States provided some ammunition for the Soviet version when it conceded that a U.S. reconnaissance aircraft, an RC-135, had flown an espionage mission in international air space and passed, at one point, within 75 nautical miles of the Korean plane. But U.S. officials said that there was no radio contact between the planes. If the Korean airliner was actually spying, analysts added, it would hardly have

flown a route that was so unvarying in altitude and direction. Moreover, Washington suggested that if the Soviets truly believed the Korean jet was spying, they would have made a concerted attempt to force the plane to land—to score a propaganda coup and to recover the espionage equipment.

Meanwhile, President Ronald Reagan won high marks for his administration’s restrained handling of the incident. The only criticism came from the Republican right, which lamented the mildness of the retaliatory measures. In a television address, Reagan asked other Western nations for a temporary ban on Aeroflot flights to the West and cancelled some U.S.-Soviet cultural and scientific exchanges. Later, the president ordered Aeroflot’s two U.S. sales offices closed, expelled the airline’s employees and suspended its right to sell tickets through U.S. carriers. But the administration has clearly ruled out more punitive steps as counterproductive.

Washington’s efforts to rally international support registered mixed results. While the International Federation of Airline Pilots Associations endorsed a 60-day ban on flights to the Soviet Union, the pilots seemed far ahead of their respective governments. The exceptions were Canada, which—before Reagan spoke—banned Aeroflot flights to Montreal for 60 days, although flights to Cuba and Nicaragua will continue

to refuel in Gander, Nfld.; and Australia, which barred its national airline from carrying Soviet diplomats. But most Western governments appeared to lack the will for concerted retaliation. In Madrid, Shultz called an emergency meeting of NATO foreign ministers, seeking a unified response to the KAL incident. The ministers pledged support for South Korea’s request for apologies and reparations and agreed to back efforts to draft new international rules guaranteeing protection for civilian aircraft. The International Civil Aviation Organization is scheduled to take up the proposal this week in Montreal. But not all governments were in favor of the suggested two-week moratorium on flights to and from the Soviet Union. The intention was to send the Kremlin, as West German Foreign Minister Hans-Dietrich Genscher put it last week, “a political signal.” But France, Greece, Spain and Turkey demurred, so the signal was guarded.

Still, the airliner attack—and the Kremlin’s belligerent rationale—clearly represented a major public relations victory for the West. Without gloating, the White House noted that the Soviet action had shocked, but not surprised, the administration. Public anger, meanwhile, was almost palpable. In Canada, the United States, Japan and South Korea I bands of demonstráis tors marched on Soviet

of Soviet President Yuri Andropov. The Moscow Circus, its nine-city Canadian tour abruptly cancelled by promoters across the country, found itself briefly stranded in Halifax, along with eight bears and nine horses. Nine state governments in the United States banned or boycotted Stolichnaya, a Soviet vodka. Longshoremen in Los Angeles refused to unload a Soviet freighter.

To most Western observers, the decision to destroy the aircraft—Ogarkov attributed it to a regional air commander, with apparent approval by senior Soviet officials in Moscow—was a serious miscalculation. In its wake, the Japanese are likely to answer Washington’s repeated calls for higher levels of defence spending. And Andropov’s peace offensive in Europe has been undermined: after the airline tragedy, the West Europeans are more likely to support NATO’s deployment of cruise and Pershing II missiles later this year.

Western analysts believe that the attack seriously injured Soviet strategic interests. But that judgment only renders the disaster all the more inexplicable. Among the unanswered questions, none is more problematic for Kremlinologists than the degree of Andropov’s control over the Soviet military.

For now, it is clear that the superpower relationship has been seriously imperilled. A scheduled Shultz-Gromyko meeting at the UN later this month may be cancelled, and Reagan has announced plans for a major UN address on the world situation. Conceivably, a tacit Soviet climb-down might defuse tensions. But such a move appears unlikely. The more realistic prospect is for continued strain, with anger and suspicion on both sides, and all the attendant dangers.

With files from Moscow, Ottawa and Tokyo. 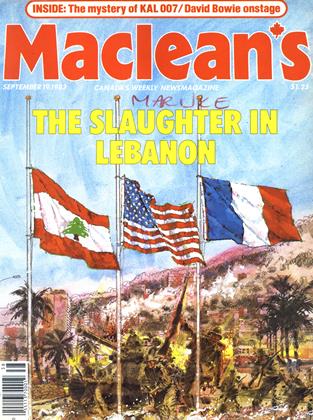