Ever since Pope John Paul II announced in 1981 that he planned to visit Austria, the preparations caused increasing apprehension in Vienna. For one thing, the Austrian officials feared that a simmering tradition of dissent between liberal Catholics and Vatican conservatives might erupt in public. For another, government leaders were concerned that the Pope might be too outspoken in his support for greater religious freedom in the Eastern Bloc. That would have jeopardized Austria’s cherished status as a neutral in the East-West struggle. Last week at the end of John Paul’s four-day sojourn at least some of the initial caution seemed to have been justified. Even the Pope himself gave a guarded evaluation of the visit. He declared that he was “certain” that his rhetoric had strengthened the resolve of the church in the Eastern Bloc. But he was much more reserved about its impact in Austria. Said Vienna church historian Hans Jacob Stele: “He only hopes that he has reinforced those who still take their religion seriously. He is optimistic in public but not in private.”

The fact is that many of Austria’s 6.7 million Catholics—87 per cent of the population—do take their religion seriously though not necessarily in a way in which the Pope would approve. Sensitivities are strong on a wide range of questions, from the despised kirchensteuer (church levy), a tax on income applicable to all those whose birth certifi-

cates identify them as Roman Catholic, to the ordination of women. During the official welcoming ceremony in a Vienna football stadium, the Pope was handed two bound volumes of letters from young Catholics asking why the church does not permit married men to be members of the priesthood and why the church does not take a tougher line on nuclear disarmament and environmental problems. The Pope’s answer to such complex questions: “You know the 10 commandments, all you

have to do is obey them.”

The non-Catholic minority also reacted to the visit. At least 18 counterdemonstrations were taking place as the Pope held his European Vespers after his arrival. Most of those, like the “Alternative Pope Festival,” originally billed as the “Anti-Pope Festival,” were organized by left-wing organizations. Still, only a few thousand people attended the counterdemonstrations, compared with a few hundred thousand at the official rallies. Nevertheless, police ruthlessly dispersed the protesters, and Catholic bystanders beat up one man who was seeking the Pope’s aid to cure a liver complaint.

Catholics themselves were also disappointed by the Pope’s comparatively subdued rhetoric on Eastern Bloc repression of the church, particularly in neighboring Czechoslovakia. The Czech authorities have successfully split the Roman Catholic Church by decreeing that priests can be ordained only by official permission of the state and by bribing priests to join the state-controlled Pacem in Terris organization. Not only that, but Frantisek Cardinal Tomasek, the 84-year-old Czech primate, was refused a passport to take part in the papal visit to Austria. But John Paul, perhaps in order not to embarrass the Austrian government, confined most of his criticism to private functions. Still, as the daily Die Presse editorialized, the Pope’s presence “forced everyday Austria to make a choice.” That fact alone is likely to encourage the Pope not to shirk controversy on future tours, including his scheduled visit to Canada in September, 1984. — SUE MASTERMAN in Vienna. 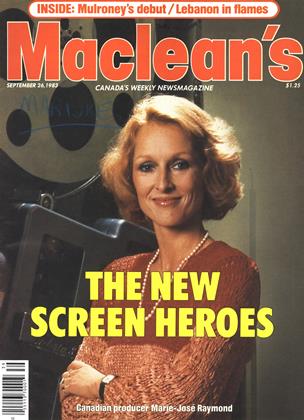