The doping of amateur sport September 5 1983

The father of drug testing in international amateur sport is an unassuming 50-year-old biochemist from Cologne, Manfred Donike. But last week at the Pan-American Games in Caracas, Venezuela, there was nothing at all modulated about the impact of the West German doctor’s work: after sophisticated tests for more than 90 banned substances-among them anabolic steroids—15 athletes were disqualified in the largest drug scandal ever to hit an international amateur competition.

B.C., and Michel Viau, 21, of St-Stanislaus, Que., were among the competitors from several nations who were stripped of their medals and face a possible ban at the 1984 Olympic Games in Los Angeles. In addition,

12 U.S. track-and-field competitors, apparently anticipating the worst from Donike’s tests, left Caracas before their races. The departures raised curiosity about all athletes, including the injured. On Tuesday Canadian sprinter Desei Williams claimed a spot in the final of the 100-m race. But when the starter fired the gun, Williams’ lane was empty, and the Canadian pleaded a thigh injury. “I ain’t on drugs,” Williams told inquiring reporters. “Personally, I don’t think they can really help a sprinter.”

The dope scandal confirmed what insiders have known for years: despite injurious side effects, anabolic steroids and stimulants—the ministrations are known as “doping”—are now as common as laurels in the ancient stadia of Greece. Said John Holt, head of the International Amateur Athletic Federation: “There has been a scandalous disregard for efficient doping control in the Western Hemisphere.”

Donike’s findings—and the suspensions—caused unease among the leading nations that will compete for medals in Los Angeles. The Americans promptly ordered up mandatory ran-

dom tests of their Games competitors and threatened to bar anyone who failed. The Soviets made private soundings about the prospect of obtaining $700,000 worth of testing equipment that they could install in a Winnebago camper at Los Angeles next year, presumably to avoid having their athletes caught later in official Games tests.

The concern spread to East Germany, which is regarded as a leading practitioner. Sprinter Renate Neufeld, who has since defected, said that while she was in training for the 1980 Olympics her coach gave her pills in a vitamin bottle that produced interruptions in her menstrual cycle, hoarseness in her voice and hair on her upper lip. After Neufeld’s defection, Donike of Cologne’s Federal Institute for Sport Research discovered that the pills were anabolic steroids. In Canada official reaction last week focused on arguments that, because so many other international competitors use banned substances, Canadian participants are forced to use anabolic steroids literally to stay in the game.

The drug at the centre of the storm is a synthetic derivative of the male hormone testosterone. The compound has been banned because in the massive doses used by some women athletes it can deepen voices, cause facial hair to grow, increase the size of the clitoris and shrink breasts. Czechoslovakian runner Jarmila Kratochvilova, winner of two individual gold medals last month at the world track-and-field games in Helsinki, is usually regarded as one of the classic examples of the new breed. Yet the muscular runner has always passed her dope and chromasome tests.

In males the most dramatic impacts include massive weight gain, shrunken testicles and a heady aggressiveness that turns some athletes into tyrants away from the field of games.

Anabolic steroids have been in use, primarily by international weight lifters, since the 1950s. But their original purposes would have pleased even Hippocrates: increasing the intake of protein to build muscles of patients suffering chronic diseases and protecting blood cells against destruction in radiation or chemotherapy. Compared to the

medical doses of 10 mg per day, however, some athletes injest—or injectas much as 100 mg in the months leading up to major competitions. Medical studies also link the drug to a form of sclerosis in the liver and to the growth of liver tumors.

As they prepare for international competitions, growing numbers of athletes are also prepared to defy the medical odds. Male and female competitors alike have discovered that anabolic steroids allow them to recover more quickly from workout sessions, which in turn makes more intense training possible. Some athletes have resorted to injecting the steroids in an oil base to inhibit medical sleuths and to avoid liver damage that comes from swallowing pills. Other athletes have used diuretics and vitamin C to eliminate traces of the compound from their systems before urine tests.

Subterfuge did not work in Caracas last week—but the special machines of Cologne's Manfred Donike did. Using computer-driven gaschomatographs and a mass spectrometer, Donike was able to detect traces of drugs used weeks before competition. Because the athletes were warned in advance about plans for dope testing, Donike derided them for being “stupid” in thinking they could escape detection in Caracas. “They should have known what was waiting here,” he said.

The surprising accuracy of the testing rattled some athletes. U.S. weight lifter Jeffery Michel, 21, of Chicago, who won—then lost—three gold medals, returned shaken to his quarters after failing his test. He told his colleagues: “They just nailed me to the wall. They said that on or about April 24 I took such and such a thing. They said if I waited a few minutes they would check and tell me how much I took.” The next day the 12 U.S. athletes went home without competing. The main fear of athletes who may have been using drugs was not of losing medals in Caracas but of being banned next year in Los Angeles, since the minimum penalty for failing a dope test is one year’s suspension from international competition.

Donike professed surprise at the controversy arising from the Caracas tests. “Claims by physicians here that we are using new technology are untrue,” he said. “This is the same technology that was used at the track-andfield world championships in Helsinki and at last year’s football World Cup in Spain.” He added, “The only difference is that our testing techniques are becoming more refined all the time and that, for the first time, we are testing for testosterone and caffeine here.” Why did tests prove positive? Said Donike: “The problem is that this is the first time in the Americas that they have had strict doping controls. They should have known about it because you can buy any of these machines from catalogues.”

The irony of the controversy was that

the high-powered amateur athletic world has known about the use of drugs for years. Ottawa’s Dr. Andrew Pipe, who spends several months a year at major international competitions, stated: “Sport has been looking for technological solutions to ethical problems. The attitude has always been, ‘If you can’t prove it, don’t worry about it.’ But the knowledge of abuses was widespread. People have been playing fast and loose with pharmaceuticals, and not just with steroids, for a long time.” Added Pipe: “It disturbs me greatly that coaches are already considering new ways to manipulate or transform the doping process.”

Winnipeg shot-putter Bruce Pirnie credits steroids for his performances at the Olympic Games in Munich and Montreal and at the 1975 Pan-Am Games, where he won the gold medal. “They have a positive effect on your training,” he said. But Pirnie discovered that he could not increase his relatively modest dosage of 15 mg per day: “I became very aggressive and restless. I couldn’t sleep well and I didn’t like myself very much.”

In Caracas last week there were some good feelings. At the weekend, as the Games approached their close, the Americans dominated the medal standings, with Cuba in second place and

Canada in third. Despite the loss of weight-lifting medals, the Canadian team took some solace from gold medals in women’s and men’s softball and in field hockey. The men’s hockey team, in fact, toppled the forbidding Argentines, who were Pan-Am gold medallists for the past seven Games. The victory will give Canada an entrée at the Los Angeles Olympics. “Now,” enthused goalie Julian Austin, “we can begin to look forward to playing Spain, Germany and Pakistan, and all those other great hockey nations.” U.S. pole vaulter Mike Tully, one of the 12 Americans who left Caracas, returned later in the week and won the gold medal in his event. Tully had taken the antihistamine Sudafed, one of the 91 banned drugs. Testing after Tully’s victory revealed no traces.

At the end of the second week of the Games, the doping controversy continued unabated. It was confirmed that a group of U.S. athletes competed in Caracas even though secret tests before they left for the Games revealed traces of prohibited medications. William E. Simon, president of the U.S. Olympic Committee, defended the athletes’ behavior. “That’s their privilege,” said Simon. “Where is the fine line?” Sadly for the Pan-American Games of 1983, it seemed to loom somewhere close to the finish. 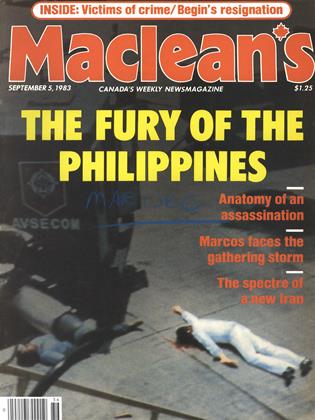