The dilemmas of a wounded leader JARED MITCHELL January 2 1984

The apparent serenity that has typified most of the Liberal Democratic Party’s 28-year tenure as the ruler of Japan was conspicuous by its absence. Instead, last week party officials were scrambling to patch together a coalition after voters delivered a sharp rebuke to Prime Minister Yasuhiro Nakasone and his colleagues. As well, the five factions that make up the LDP started to disagree publicly again. The party was able to persuade eight

independent members of the Diet to join in forming a government which has a majority of only three seats. Predictably, anti-Nakasone faction members called for the prime minister’s resignation, but after only 13 months in power the outspoken former university president rebuffed suggestions that he should resign. “No political vacuum is allowed,” Nakasone said last week, “at a time when problems are mounting at home and abroad.”

a dilemma: to save his job and at the same time continue implementing his conservative, pro-Western policies. At the centre of the controversy is his association with his patron, Kakuei Tanaka, who was convicted in October of accepting $2.6 million in bribes in the Lockheed payoff scandal. The Tanaka affair, and a party tradition of patronage and bribery, had focused the election campaign on what Opposition Japan Socialist Party Leader Masashi Ishibashi nicknamed the LDP’s “money-corrupted policies.” Voter outrage at the Tanaka affair slashed the LDP’s lead in the 511-

seat Diet from 286 seats to 250. The setback—the largest in the party’s history—has served as a springboard for former prime minister Takeo Fukuda’s faction within the LDP to unseat Nakasone and clean up the party’s image. Said Fukuda, a longtime Nakasone foe: “I don’t think people will be convinced [of the LDP’s ability to govern] unless the Tanaka problem is cleared up.”

The ambitious Nakasone came to power last year as Tanaka’s personal choice to succeed retiring Prime Minister Zenko Suzuki. He rapidly gained a reputation as a world statesman. But

the policies that won him favor from powerful allies like the United States have failed to impress some faction leaders within the LDP, as well as the voters. They are skeptical about the long-term effects of his promises to increase defence expenditures. At the same time, his pledges to cut government deficits sparked suspicions, especially in the LDP’s traditional rural base of support, where farmers rely on heavy government subsidies to survive. But it was his position as Tanaka’s protégé that sparked the most controversy, especially after Tanaka refused to resign his parliamentary seat following his conviction.

Nakasone is likely to survive this week’s election in the Diet to remain prime minister if only because there is no clear LDP successor in sight, but his long-term survival is far from assured. Meanwhile, Tanaka won the biggest majority of his 36-year political career in his Niigata riding last week, and Nakasone can count on the support of the powerful Tanaka faction. But that may be of little help in his attempts to woo the support of party rivals. As a result, Nakasone may attempt to mollify antiTanaka members by giving them preference in his new cabinet at the expense of his own allies.

Even that may not be enough to appease Tanaka’s critics. Pressure for a cleanup is likely to be strong not only from within the LDP but from the strengthened opposition, especially Ishibashi’s Socialist Party, which gained 11 seats, and the Komeito (clean government) party, which gained 24 seats.

Nakasone’s attempts to keep his slender majority intact will be even more difficult with the LDP’s loss of control over many of the Diet’s important parliamentary committees. Its former domination enabled it to create and pass legislation largely without consulting the opposition parties. Now the government will have to consider incorporating some of the opposition’s demands into future programs or, as Nakasone put it last week, “humbly” consult. One area likely to be affected will be Nakasone’s plan to reduce the government’s $55-billion deficit. Indeed, it now appears likely that the government will introduce mildly stimulative measures to appease the Socialists.

For the LDP, which has enjoyed a free hand in government almost continuously for 28 years, it will be a difficult period of adjustment. The task facing its prime minister is to heal the party divisions before its leadership review next November. If he fails to do so, the LDP may have no choice but to choose a new leader in an attempt to recover its losses. JARED MITCHELL in Toronto, with correspondents'reports. 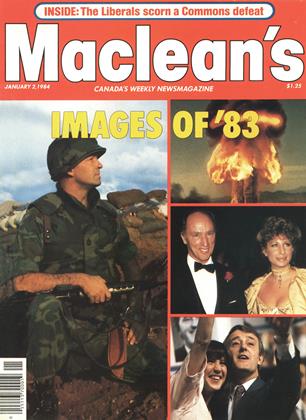