CBC TV crews are in the process of filming a news special about life under the prime ministership of Pierre Trudeau. It is ready to be aired at the drop of a resignation announcement. As one of the Quebecers who had to be “in the can” by the end of last week, I have had plenty of time to dwell, not just on the Canadian economy and economic policymaking over the past 15½ years but on the economic policy directions we are taking today for the future.

It is not a jungle of competing ideas out there. It is a vacuum. Except for the 1980 National Energy Program and the MacEachen budgets, all of which were disasters for different reasons, Ottawa abdicated economic decision-making to the Americans as long ago as 1976. With the withdrawal of the worst of the MacEachen “initiatives” early in 1982, it has been hard to tell whether there is anyone at all inhabiting the offices at the departments of finance or industry, trade and commerce. Today, my greatest frustration as a Canadian economic analyst is that I have to write about U.S. economic policy.

In 1976 Bank of Canada Governor Gerald Bouey announced his conversion to the monetarist philosophy. That was not an independent decision, since the U.S. Federal Reserve had been monetarist for months. What the Bouey announcement signalled was that Canadian interest rates would essentially be pegged to U.S. rates, regardless of the needs of the Canadian economy. Since then, the push-me, pull-me relationship has continued.

Because Canada has not had an independent interest rate policy—our policy has varied according to the needs of the U.S. economy—we have suffered a more serious recession than that of the United States. Our government’s brief forays into the money markets to keep the Canadian dollar in the vicinity of 80 cents (U.S.) have meant higher than necessary Canadian rates for longer than necessary. True, the Canadian dollar has depreciated by only two percentage points against the American, while the franc, mark, pound and yen have depreciated by more than 20 per cent. But the Canadian rate of inflation has dropped more slowly than the U.S. rate; and today, more to the point, the level of Canadian unemployment, at 11.1 per cent, remains almost unchanged from the crisis high of 12.6 per

cent in March, 1983, while the U.S. rate of unemployment is down significantly from a December, 1982, high of 10.6 per cent and is at least two percentage points lower than the Canadian unemployment rate.

It took seven years to formulate the National Energy Program as a Canadian response to the Arab oil embargo of 1973. It has proven to be a disaster. Not only did it disrupt business, but within 10 months the policy was obsolete. Prices were not only failing to rise, they were falling. The MacEachen budgets destroyed what little confidence Canadians had left in the ability of their federal politicians to understand economics. The tragedy was that the budgets lashed at everyone—spenders, savers, widows and orphans alike. The government may have rescinded the proposed legislation, but dealing with profound disillusionment is another story. Since those fiascos, our economic

policy mavens have done nothing. Perhaps they have had enough of their own snafus.

So we turn to the U.S. economy and ask the same question everyone else is asking: what is going on? Still, in the United States there is plenty of economic activity and lots of economic indicators. Around the world a controversy has raged about whether the U.S. recovery would continue to gain momentum, slow down or peter out. The Paris-based Organization for Economic Co-operation and Development last week criticized the United States, saying that unless Americans dealt with their deficit there would be no recovery this year. The OECD seems to have missed a few signals that the money markets have caught.

But it looks very much as though the Americans will deal with their deficit. U.S. treasury officials, the council of economic advisers and the office of management and budget, usually competitors for the attention of the president, are all in agreement on the need for additional tax revenues. The only area in which they are divided is on how

to raise taxes without giving the appearance that President Reagan is going back on his word.

On Jan. 13 Federal Reserve chief Paul Volcker said quite clearly that there is room for lower interest rates if the administration begins dealing with the deficit. Immediately after Volcker’s declaration, the markets responded. Bonds went up in anticipation of lower rates, the U.S. dollar weakened against all major currencies, and the stock market fell in anticipation of a slowdown in corporate earnings. All that remains now is a confirmation by the president that a temporary $40to $50-billion tax hike has been built into the 1985 budget. That confirmation could come as soon as the end of this month.

After a U.S. tax increase is announced, the economic scenario would be fairly easy to determine. Interest rates around the world would fall. The U.S. dollar would fall. A more broadly based, if slower, economic recovery would be more sustainable. World unemployment rates might even improve.

Where will Canada be? Following doggedly in the footsteps of our affluent neighbors? Not likely. The problem for Canada is that, while it is difficult to do a whole lot better than the United States, it is not so hard to do a whole lot worse. We have proven that in the past 15 years. We have averaged greater inflation, greater unemployment, sharper declines in output, less buoyant recoveries, a greater loss of real income, a sharper fall in relative living standards and a generally higher “discomfort” index than our American neighbors.

In tough times, whether they are inflation-tough times or recession-tough times, Canadian economic policymakers, when they are not preparing to impose nightmarish home-made concoctions on the populace, have tended to blame conditions on the rest of the world. How many times have you heard the Prime Minister tell us, “Everybody has it tough right now”? 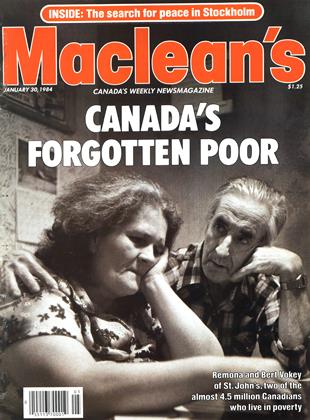