The scene takes place late at night in a Hollywood bar called Eve’s. The voice of a singer, full of yearning, drifts out the door into blue-and-pinklit streets that look like a theatre set. Inside, everyone nurses a drink and a fantasy—and because Choose Me is a movie in which Los Angeles is both the setting and the state of mind, all the fantasies come true with the arrival of Mickey (Keith Carradine), a handsome drifter with a mysterious past. He claims that he has just escaped from a mental ward and that he is on his way home to Las Vegas. “But nobody’s from Las Vegas,” says an incredulous woman at the bar. “I am,” Mickey says, with a calm, ambiguous smile.

Mickey is either a pathological liar, a compulsive romantic or both; Carradine’s smooth performance walks the line between the two. He keeps asking women to marry him, including the owner of the bar, Eve (Lesley Ann Warren), a bar gadfly, Pearl, played with redeeming dignity by Rae Dawn Chong, and a radio phone-in therapist called Dr. Nancy Love (Geneviève Bujold). But both Eve and Love have a problem with romance: Eve has too many men and not enough love, and the repressed doctor Love has all the answers and not enough men. So, under an assumed name, Love moves into Eve’s house and, when strangers come calling, she answers the door. One of them—and at that point the plot swerves from straight-faced melo-

drama to sexual farce—is Mickey. He ends up in bed with Love—and in love with Eve. The morning after, the formerly prim doctor is back on the radio, extolling the joys of spontaneous sex to her devoted listeners.

The best things about Choose Me are a sly script and freewheeling performances by all the main characters. The dialogue, which has the terse pacing of a crime novel, is full of the sort of oneliners that bars generate: “New in town?” the bartender asks Mickey, who replies, “Nope. Same as ever. Town’s different.” Carradine manages to embody the paradox of a liar who always tells the truth. He sits in the eye of the camera like an alert, intelligent lizard, and his focused intensity keeps the interwoven fantasies from flying apart. Bujold is original and funny as the schizophrenic Love, and Warren does her best with the rather victimized role of the standard neurotic, looking for love and living with lunatics.

Director Alan Rudolph ( Welcome to L.A.) has taken several small risks with his film, and they have worked well. The music, composed and sung by Teddy Pendergrass, performs the role of a supporting character as it flares into passionate soul and then simmers to a low, blue flame of jazz. The design of Choose Me is strong, almost to the point of selfparody, with posters, paintings and a claustrophobic aura of chic. The result is an idiosyncratic comedy full of seductions, deceptions and illusions—just like any smoke-filled, mirror-lined, bigcity bar. — MARNI JACKSON 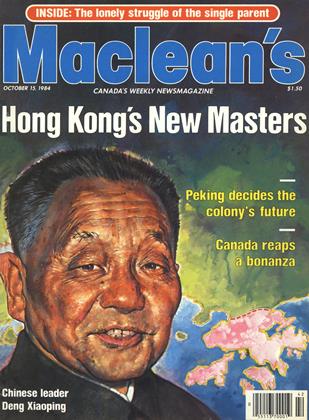