Troubled echoes of a double hanging

Troubled echoes of a double hanging

A debate as old as civilization

Among 18th-century Londoners, gathering at Tyburn hill gallows to watch the death throes of convicted pickpockets (risking losing their money to thieves as they did so) was a popular amusement. With the death penalty prescribed for more than 220 crimes, hangings were both frequent and well attended. Over the years the number of offences calling for the death sentence shrank in Britain until the government retired the noose in 1965. Yet capital punishment has been practised virtually since the dawn of civilization. And for most of that time religious leaders, law enforcement officers and politicians have been debating its morality and its effectiveness as a deterrent.

“Thou shalt not kill”— the Sixth Commandment. Exodus 20:13

“Ye have heard that it hath been said, ‘an eye for an eye and a tooth for a

tooth’; But I say unto you, that ye resist no evil: but whosoever shall smite thee on thy right cheek, turn to him the other also. "—Jesus of Nazareth. Matthew 6: 38; 39

“We know how to hang in Canada.” —attributed to the governor of TroisRivières around 1650

“Your representative owes you, not his industry only, but his judgment; and he betrays instead of serving you if he sacrifices it to your opinion.” — English parliamentarian Edmund Burke speaking to the electors of Bristol, Nov. 3, 1774

“Depend upon it sir, when a man knows he is to be hanged in a fortnight, it concentrates his mind wonderfully.” —English author and literary scholar Samuel Johnson, Sept. 19, 1777

“It is not a pleasant duty for me to have to sentence you only to prison for life; your crime was unmitigated murder, you deserve to be hanged. Had the jury done their duty, I might now have the painful satisfaction of condemning you to death. You, gentlemen of the

jury, permit me to say that it would give me great pleasure to see you hanged, each and every one of you, for bringing in a murderer guilty only of manslaughter.”—Judge Matthew B. Begbie, later chief justice of British Columbia, at the trial of an American, January, 1863

“I used to say to condemned persons as I beckoned with my hand, ‘Come with me.’ Now at night when I lie down, I start up with a roar as victim after victim comes up before me. I can see them on the trap, waiting a second before they face their Maker. They taunt me and haunt me until I am nearly crazy with an unearthly fear. I am 200 times a murderer but I won’t kill another man.”— John Robert Radclive, Canada's leading public executioner, 1912

“The Americans come up here and admire us for the way we hang criminals. They sit in our club and say, ‘You certainly do hang them, don’t you!’ My! they’d like to hang a few. The day may be coming when they will. Meantime we like to hang people to make the Americans sit up.”—Stephen Leacock, I’ll stay in Canada, 1931

“Will it hurt? Will I still be conscious when my neck breaks? You do die instantly, don’t youV'—Joseph Albert Guay, convicted of planting a bomb on an airplane in Canada, Sept. 9, 19 k9

“There is something in the heart or mind of man that influences his actions and makes the basic difference in a person choosing the right or wrong way of life. Until this unknown cause is found and a treatment devised, I feel it is our duty as members of this House to support the retention of capital punishment, at least for a second offender.” —Jack McIntosh (PC, Swift CurrentMaple Creek), Commons abolition debate, March 2k, 1966

“The only excuse society has for taking the life of any person is if it is proven necessary to do so for the protection of society and our way of life... .1 have not yet found a criminal who ever plotted a crime and guided his conduct on the basis of the length of the punishment which would be awarded for such an offence.”—Terence Nugent (PC, Edmonton-Strathcona), Commons abolition debate, March 23, 1966

“Vengeance is an act by which evil is returned for evil. Now, there is no question of vengeance in the case of society. Society is responsible for punishment and does not commit murder in such case. It punishes and castigates the one who has committed murder. It is a responsibility of society which cannot be reneged or avoided. It is its own responsibility. It is not something that can be

“The argument is that hanging is a deterrent, but history does not support that argument. Will anybody say that it was because of weakness that these horrible punishments were changed? The reason was that juries began to seek reasons to acquit.”— Tory Opposition Leader John Diefenbaker, Commons abolition debate, April k, 1966

“There is not one normal human being on the face of the earth who does not fear death. I do not believe this can be gainsaid. One is therefore led to the conclusion, probably oversimplistic, that death must be a deterrent. No one is going to attempt to cross the tracks at a subway station if he sees a train is coming. No one is going to open the door of an aircraft flying at 30,000 feet if he believes that, by so doing, he is bound to

fall out____It seems to me there are a

large number of murders committed by persons who ... are normal but for the commission of the crime of murder on their part. To them I say the death penalty is a deterrent.”— Erik Nielsen (PC, Yukon), Commons abolition debate, May 3, 1976

“I learned.. .that the man who killed my husband, P.C. Leslie Maitland, last Feb. 1 has now been sentenced to death. I would like you to know that the views of myself and my husband’s family on capital punishment remain unchanged. We

are totally against it. It would not bring Leslie back and it is too easy a way out for all of us. Society condemns murder, but is willing to accept the murder of this man in the name of justice. Please do what you can to prevent this terrible second crime, before it is too late.. .The killing of this man would be completely foreign to all the moral standards of both my late husband and myself.” —slain Toronto policeman's widow Pauline Maitland, quoted in Parliament by Andrew Brewin (NDP, Greenwood), May 3, 1976

“...The issue of capital punishment is, from a moral perspective, probably the most important issue on which a politician is asked to make a judgment. By this I mean that before one can debate the morality of any social or political system, liberalism, socialism or conservatism, one must assume at the outset that all mankind has a preceding moral right to exist, that all men have an equal claim at the outset, once they are born, to continue to exist. It is for this reason that I believe most seriously that those who favor capital punishment have upon themselves the moral onus to prove that this form of killing by the state is justified.”—NDP Leader Ed Broadbent, Commons abolition debate, June 15, 1976

“It is not open to anyone among us to take refuge in the comforting illusion that we are debating nothing more than an abstract theory of criminal j ustice.... I want to make it very clear that if a majority of honorable members vote against abolition, some people are going to be hanged. While members are free to vote as they wish, those who vote against the bill, for whatever reason, cannot escape their personal share of responsibility for the hangings which will take place if this bill is defeated....

“Are we, as a society, so lacking in respect for ourselves, so lacking in hope for human betterment, so socially bankrupt that we are ready to accept state vengeance as our penal philosophy?...To retain [capital punishment] in the Criminal Code of Canada would be to abandon reason in favor of vengeance; to abandon hope and confidence in favor of a despairing acceptance of our inability to cope with violent crime except with violence.”—former prime minister Pierre Trudeau, Commons abolition debate, June 15, 1976

“Yes, I do rule out the idea of a referendum [on capital punishment]. If you believe in the British parliamentary traditions and system, and I do, that calls upon members of Parliament to assume their responsibilities.”—Prime Minister Brian Mulroney, Ottawa press conference, Sept. 28, 198k 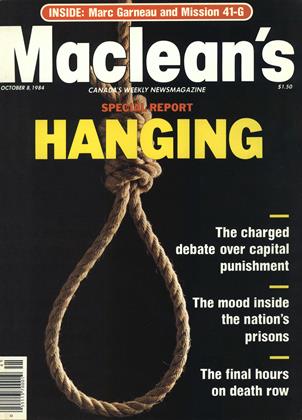