Rumors of the meeting circulated in Ottawa for days after the federal minister of regional industrial expansion, Sinclair Stevens, summoned Joel Bell, president of the Canada Development Investment Corp. (CDIC) to his office on the fourth floor of the Center Block on Parliament Hill. Stevens’s message to Bell was blunt. He told the Liberal appointee that he was fired and that the Conservative government intended to put about $2.2 billion worth of CDIC assets on the auction block for private sector buyers. Then, last week Stevens made the details public. At a news conference Stevens introduced Bell’s replacement, 61-year-old Paul Marshall, president of Calgary-based Westmin Resources Ltd., and he announced that a new slate of high-powered business executives had been appointed to CDlC’s board of directors. Their task: to clean out its corporate stable of debt-ridden firms, including Canadair Ltd., de Havilland Aircraft of Canada Ltd. and Eldorado Nuclear Ltd., within the next six to 12 months.

With his free-enterprise colors flying, Stevens said the move was meant to

signal that the government’s role “is to support the private sector by setting the right atmosphere for business.” Stevens was less specific on who might buy the ailing firms. Said he: “We would welcome one buyer for the entire group; whether or not we will be able to arrange that we do not know.” By week’s end, the one identified potential acquisitor, the British Columbia Resources Investment Corp. (BCRIC), had emerged. But it was unclear whether a quick sale of the CDlC’s assets was possible at anything above fire-sale prices and whether the government would recoup its considerable investments in the CDlC’s moneylosing firms. Conceded Stevens: “Governments must accept that there is never a truly ideal time to dispose of Crown corporations.”

Stevens has brought in a team of experienced corporate guns to accomplish his goal. Marshall’s credentials include a successful career in the Canadian chemicals industry prior to moving to the presidency of the highly profitable Westmin Resources, a subsidiary of Brascan Ltd. of Toronto, at its creation in 1981. Marshall will receive only director’s fees of $5,000 a year plus $400 a meeting as a CDIC board member—he will continue to collect his Westmin salary—and he intends to return to Westmin in six months. Marshall took the job expecting that Trevor Eyton, the presi-

dent of Westmin’s parent, Brascan Ltd., would be brought in as a CDIC director to help him oversee the complicated corporate disposal process.

The new team faces a complex job because most of the CDlC-run firms are far from appealing. As a result, said Stevens, the government wants one buyer for the CDIC so that “people do not pick the best cherry.” The only really attractive buy is Teleglobe Canada, which provides Canada’s international telephone and telecommunications links by satellite. The Montreal-based company made a profit of $41 million in 1983 and a further $12 million in the first six months of 1984.

At the same time, money-losing Canadair Ltd. might attract a buyer because of some earlier deft financial footwork by the Liberal government. The Quebec aircraft manufacturer, which employs 4,350 people at four plants in Montreal, lost $1.4 billion in 1982, the largest loss in Canadian corporate history. But this spring the federal government created another government-owned shell company which assumed $1.1 billion of Canadair’s long-term debt. With a clean balance sheet, Canadair managed a 1984 six-month profit of nearly $1 million. But Canadair’s narrow focus on the executive jet market may prove an obstacle to its sale, according to industry analyst Robert Joedicke, first vice-president of Shearson Lehman/American Express in New York. Said Joedicke: “I doubt there are a lot of companies around waiting for this sale. It is a capital intensive industry, high tech, with limited demand and lots of competition.”

Other cherries in CDic’s basket are even less appealing. Downsview, Ont.based de Havilland, which builds the Dash 7 and Dash 8 commuter planes as well as the twin Otter and Buffalo aircraft, has received $500 million in government grants since November, 1982. But the firm, which carries a debt of $77 million, lost $236 million last year and a further $16.5 million in the first six months of 1984. Eldorado Nuclear’s financial record is little better. The Ottawa-based miner and refiner of uranium lost $5.4 million in the first half of 1984 and has a debt of $573 million.

Debt problems will also pose an obstacle to the government’s sale of its 48per-cent interest in Canada Development Corp. (CDC), a Vancouver-based conglomerate with holdings in everything from mines and petrochemicals to high-tech firms. CDC is struggling with a $4.4-billion debt load and lost $45 million last year. The company is fighting back into the black—it made a $27.5million profit in the first half of this year—but its long-term debt remains worrisome. As well, the government wants to sell five million shares which it

bought from the ailing farm equipment maker, Massey-Ferguson Ltd., in 1981. That too may prove difficult because of the stagnant world market for farm machinery.

Executives at bcric—a public firm created by the B.C. government in 1979 as a parent for a host of money-losing provincially owned firms—revealed that they were studying the possibility of buying the CDic’s assets, but they favor a noncash sale—perhaps involving BCRIC paying the federal government newly issued shares rather than money.

Liberal Leader John Turner was noncommittal, saying that he wanted to see the terms of the sale before passing judgment. But NDP finance critic Nelson Riis was more blunt. He asserted, “The size of the sale will likely preclude investment by a Canadian buyer, leading to even more foreign ownership in the Canadian economy.” Stevens disagreed. “We believe that the discipline of the private sector will in fact create jobs and encourage investment,” he said. The market will be the ultimate judge of Stevens’s apparent confidence.^ 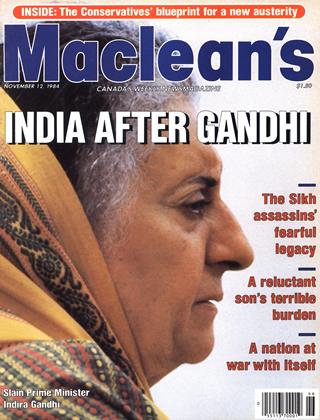