Over the past 50 years laws forbidding abortion have been struck down or at least modified throughout the world. More than 20 countries have liberalized abortion laws over the past 15 years. But despite the trend, debate over the issue has reached an unprecedented intensity as abortion opponents struggle to turn the tide. In the United States, which since 1973 has allowed free access to abortions, antiabortion groups in five states have lobbied to curtail public funds to hospitals that perform them. And last week the voters of Colorado approved a similar motion in a referendum. Now, as prochoice Supreme Court judges retire, their supporters say that President Ronald Reagan will appoint replacements who will overturn the law. The trend holds in other Western countries as well. In several Canadian provinces social pressure has forced a decrease in the number of hospitals performing abortions.

But the backlash is not restricted to countries with recently liberalized laws. In Mexico, where the government ad-

mits that every fifth pregnancy ends in illegal abortions each year, a 1983 plan to liberalize the law slightly encountered so much public opposition that the government abandoned it outright. And a decision last year by Spain’s socialist government to overturn one of the harshest anti-abortion laws in Europe, replacing it with one allowing abortions on limited medical grounds, sparked what one Spanish cleric called “the most serious attack against the church committed so far this century.” Even in Ireland, where abortion under virtually all circumstances is illegal, Catholic activists last year succeeded in persuading the government to amend the republic’s constitution to ensure that the law can never be altered.

Controversy: In Canada the abortion issue centres on a basic moral decision. But around the world the controversy is clouded by an almost limitless variety of traditions, laws and social and economic considerations. Thirty-six per cent of the world’s 4.5 billion people live in countries where abortion is restricted, usually on religious grounds, according to the late Christopher Tietze, author of Induced Abortion: A World Re-

view, 1983. Ten per cent of them live in countries where it is prohibited in any circumstance, and a further 18 per cent live where abortion is permitted only to save the life of a pregnant woman. The citizens of most Moslem, African and Latin American countries, as well as five European states—Belgium, Ireland, Malta, Portugal and Spain—fall into these two categories. And eight per cent live in countries where abortion is allowed on broader medical grounds, usually if there is a threat to the woman’s health or known impairment of the fetus.

Elsewhere, governments take greater account of social considerations when dealing with abortion laws. Twenty-five per cent of the world’s population lives in countries whose governments permit women who are poor, unmarried, inadequately housed or otherwise disadvantaged to have abortions. India, Japan and the United Kingdom are all in that category.

Control: The rest of the world’s population lives in countries—including China, the United States, Italy, France, Sweden and most Eastern Bloc states— that allow free access to abortion, although the procedure is usually limited to the first three months of pregnancy. In some cases—Singapore, Tunisia and China—the policy reflects official determination to curb population growth. In the Soviet Union, where contraceptives are unpopular but small families are desirable, women use abortion as a form of birth control, averaging six each during their lifetimes. But more often, according to Tietze, liberal abortion laws reflect official concern about three factors: the high mortality rates associated with illegal abortions; inequality when abortion is available only to the rich; and women’s growing demands for the right to control their own bodies.

The one factor that overwhelms all discussion of international abortion laws is that official sanctions rarely prevent them. Recent United Nations estimates put the number of induced abortions each year as high as 55 million— 4 xh interrupted pregnancies for every 10 live births. Authorities estimate that about half those abortions are illegal and that more than half take place in developing countries. The figures are speculative at best but they are supported by dramatic abortion increases in countries where laws have been liberalized, indicating the former extent of illegal abortions and the number of foreign women who seek abortions in countries where it is legal.

Still, even as the debate intensifies, millions of women continue to seek abortions—sometimes at great risk— and no argument or law has succeeded in stopping them. 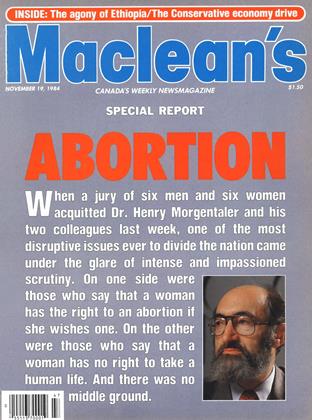