His tearful announcement shocked and saddened the hockey establishment and legions of fans. At age 33, Guy (The Flower) Lafleur retired last week, signalling the end of one of the game’s most brilliant careers and marking the passing of another era in one of the most successful franchises in professional sports history. Few athletes in any sport could raise spectators out of their seats the way Lafleur did for 14 National Hockey League seasons. In the storied tradition of les Habitants, Lafleur was the French-Canadian superstar, inheriting the mantle from the legends who preceded him—Jean Béliveau, Maurice (Rocket) Richard and Howie Morenz. Fans from Montreal to Los Angeles chanted “Guy, Guy, Guy” each time he started one of his thrilling rink-long rushes. Then the cheering stopped. This season Lafleur lost the masterful scoring touch. Suddenly, he was no longer the star, no longer the leader.

The Canadiens have won 22 Stanley Cups, and Lafleur’s name is engraved four times on the NHL’s championship trophy. But the Habs have not won the championship since 1979, and although Lafleur led the team in goals last season with 30 he was scoreless in his last 15 regular season and 12 playoff games. This year Lafleur had only two goals and three assists in 19 games. “Maybe I’m not as motivated as in my big years,” le démon blond said last week. Those “big years” in the 1970s earned Lafleur a special place in the hearts of hockey fans and assured his place in hockey’s Hall of Fame.

The native of Thurso, Que., was the dominant and most exciting player in the league over the past decade. After a brilliant junior career with the Quebec Remparts, Lafleur joined the Canadiens in 1971 and, in his first three seasons, scored 29,28 and 21 goals. Then, in 1975 he blossomed and scored 53 times. For the next five seasons he scored 50 or more goals, won three scoring titles, the Hart trophy twice as the NHL’s most outstanding player, the Conn Smythe trophy once as the most outstanding player in the playoffs, and he was an All-Star right winger six times. In 961 regular season games, Lafleur scored 518 goals and added 728 assists, making him ninth on the NHL all-time goalscoring list and eighth on the total points list.

The bloom began to fade four years ago as Lafleur, slowed by a knee injury, scored only 27 times and failed to make the all-star team for the first time since 1975. His heavy smoking and his taste for Montreal’s night life became public knowledge when he fell asleep at the wheel of his Corvette in the early hours of a March morning in 1981. The vehicle plowed into a fence and the king of Quebec narrowly escaped death. Two more merely mortal 27-goal seasons followed. There was intense pressure from the Montreal fans and from the man himself to carry the Canadiens to glory once more, but he could no longer do it. “People would like to see me score 50 goals again and I would like to,” Lafleur said last year. “But the people have to understand that we don’t have the same team. Things change, people change, times change.”

The change in the Canadiens is now almost complete. They are no longer a distinctly Québécois team; they are no longer the Flying Frenchmen. In 1968 the league abolished the rule that each year gave the Canadiens the rights to the top two French-Canadian players graduating from the junior ranks. As a result, alongside a Swede and a Czech, there are now as many Americans (six) wearing the bleu, blanc et rouge as there are French-Canadians. Said team president Ron Corey: “Our fans would rather have us win in English or in Chinese than lose in French.”

Lafleur said that he felt he had picked a good time to retire. He explained, “I saw the team was going well this year and thought it better to go out that way than when the team was in difficulty.” Now the old order has changed completely. Former teammates Jean Béliveau, Serge Savard and Jacques Lemaire are respectively the team’s vice-president of social affairs, general manager and coach. Befitting a national treasure, the Canadiens Friday offered Lafleur an off-ice position, most likely in marketing or public relations, in the organization after he returns from a brief hunting trip. Said Corey: “Guy will be part of the organization for the rest of his life.” Fans will no longer chant, “Guy, Guy, Guy,” but they will not forget him. 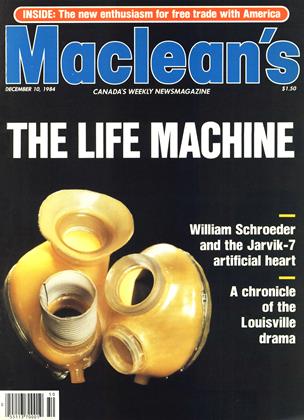