Robert White, Canadian director of the United Auto Workers, gained international recognition in October for his steadfast refusal to accept U.S. direction on the strike he led against General Motors of Canada Ltd. Frustrated by what he called UAW president Owen Bieber’s “unnecessary interference” in Canadian affairs, this week White will press his cause by reiterating his demand for full Canadian autonomy within the 1.2-million-member union during a meeting of the 26-member international executive council in Detroit. White told Maclean's that there is one vital question on the agenda: “Are we 26 internationalists or 25 Americans and one Canadian?” But White confirmed his own nationalist bias when he said that this week he would also announce new plans to help make his dream of an all-Canadian coalition of industrial workers a reality. For the dynamic 49year-old labor leader, the week’s events will lift him to a new pinnacle in an already brilliant career. But for the rest of the country the meeting could herald a historic epoch in Canadian unionism.

White’s rallying cry comes as a shock at a time when nationalism has reached a low ebb among Canadian politicians. In the past, the UAW’s Canadian directors have submerged their differences with headquarters in Detroit. But years of small irritations came to a head dur-

ing the GM strike when Bieber pressed the Canadian negotiators to accept an agreement similar to one that U.S. workers had adopted. Although White would not provide details of Bieber’s role, he said that the president attempted to issue “directives” to the Canadian negotiating team, and added that his interference prolonged the strike. Said White: “Any assistance my U.S. col-

leagues provide at future negotiations must be at my request. It is necessary to do it that way.” And White told a unanimously supportive UAW Canadian council meeting in Toronto last week that if his 25 U.S. colleagues refuse to accept his call for Canadian autonomy within the union, he will unilaterally declare complete independence.

Even if he reaches an accord with his U.S. colleagues, White has promised to continue his drive for independence by actively seeking mergers with other Canadian industrial unions. His ultimate goal: to form an umbrella organization called the Canadian Metal Workers Federation. If it comes into being, the federation could combine the resources of several Canadian unions, offsetting the need to rely on U.S. affiliations and perhaps allowing for co-ordinated bargaining. White said that his union has already entered merger negotiations with the Canadian Association of Airline Employees and two other unions. He told Maclean’s: “I would like to be part of any restructuring process that makes the Canadian labor movement more vibrant. We will soon have a great deal to say about what role I will play in that process.”

For their part, spokesmen for the Canadian branch of the United Steelworkers of America denied that their union is seeking a merger with the UAW. But

tensions similar to those in the UAW erupted among steelworkers last fall when Lynn Williams, international president—and a Canadian—endorsed a call by the U.S. Congress for steel import quotas which would have cost an estimated 2,000 Canadian jobs. And many observers predict that the advantages of amalgamation will eventually prove irresistible to Canadian industrial unions. Robert Laxer, a retired Canadian studies professor, predicted in his 1976 book, Canada's Unions, that such a move would be the beginning of the end for American-based unions in Canada. Now, Laxer argues that mergers are inevitable. Said Laxer: “It is almost a certainty that they will find common interests and join together. They would have a stronger structure, more solidarity and more clout.”

To some unionists, White’s recent moves signal less a radical change of course than the maturation of a longstanding trend. John Lang, secretary treasurer of the 40,000-member Confederation of Canadian Unions, a nationalist group that criticizes the behavior of international unions, noted that the percentage of Canadian workers in U.S.based unions has dropped to 40 per cent since 1969, when they accounted for 75 per cent of all unionized Canadians. Membership in Canadian unions has more than doubled since then to 3.7

million, while membership in U.S.based unions has increased only marginally. Said Lang: “A move like White’s encapsulates the current trend, and it will accelerate the move toward independent unions.”

To many Canadians the prospect of renewed nationalism within the Canadian labor movement is less significant than the emergence of White as a powerful and persuasive leader. A native of Ballymoney, Northern Ireland, White moved to Woodstock, Ont., with his family at the age of 15. He attended high school for less than a year before dropping out and going to work in Woodstock’s Hay and Co., a woodworking factory. By the time he was 17, White was a steward in the UAW local. He became president of the Woodstock local when he was 22, and since then has never held a job outside the UAW. Recalled White: “My first election as steward really happened by accident. I had no personal ambitions.” He dismisses as “a political impossibility” the suggestion that he might continue his UAW career with a move to the international leadership. Added White: “I’m not the kind of guy who sits around and contemplates my future.” But many of those who predict the future path for Canadian unionism see White as nothing less than the prime architect of a new age in the Canadian labor movement. PAUL BERTON 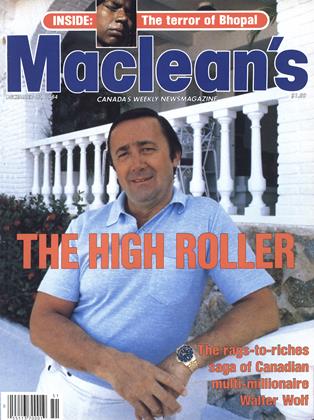