In the cold ascent of the mountain, Uzbek suddenly balked. Uzbek, the white pony I had bought a few days earlier from a used-horse dealer, was heaving hard and his legs trembled. On foot, I led the pony over the next summit trail. But for my Mojaheddin escort, it was a routine run—a week-long, 350-km trek from the Pakistani border town of Miram Shah deep into the heart of Afghanistan. By Afghan standards our caravan of medicines, tools, land mines and ammunition was a simple affair: six armed guerrillas, four donkeys, two horses, one mule, Uzbek and me.

Our leader, Nekh Mahomet, had made the round trip four times in the past three months, crossing the five mountains and three rugged plains that separate Miram Shah from our remote destination at Jughtu, the military headquarters of Mojahed commander Amin Wardak. One night, as he prepared for his evening prayers, Mahomet handed me his Kalashnikov automatic rifle. Instinctively, my eyes turned apprehensively toward the clear desert sky.

Then, his wizened 40year-old face broke into a boyish grin. “Mojaheddin,” he said with simple pride, tapping his index finger against his chest as one of the Islamic holy warriors.

Tense: In truth, pride and rifles are inadequate weapons against the Soviet Red Army. On the high, exposed plains, any passing caravan looks suspicious from helicopter gunships. When the sky patrols appeared I covered myself with brown and grey blankets, tried very hard to resemble a rock—and prayed.

I had been planning the trip for months, to observe the five-year-old civil war at first hand. The Paris office of the National Islamic Front of Afghanistan put me in touch with envoys in Pakistan, and after three tense days in

Peshawar—surely south Asia’s capital of espionage—we were on our way.

The supply lines maintained by caravan leaders like Mahomet are vital to Afghanistan’s Jihad, or holy war, against Soviet occupation. Although arms and ammunition are often captured from Soviet and Afghan government troops, more must be smuggled in, usually via Pakistan. Medicine, clothing and gasoline for the few Mojaheddin

motor vehicles have to be carried over the mountains on camelback. The Soviets have tried to sever those lines and close the border with Pakistan. In October, Afghan government forces laid mines in the more heavily travelled mountain passes, known as Beaten Routes. A month earlier Moscow sent 10,000 troops into the Afghan border province of Paktia and stepped up nighttime ambushes of Mojaheddin caravans.

But the campaign to cut guerrilla supply lines has had little apparent success. I travelled twice through Paktia after the Red Army had reinforced its garrisons. Though sometimes obliged to travel by night, our caravan moved freely through the countryside. One night we

passed within a few kilometres of the regional Soviet military headquarters at Khost, where an estimated 5,000 Soviet soldiers are bivouacked. The sound of helicopter engines and the spooky orange light of flares filled the night sky, but we passed unmolested. Sealing Afghanistan’s 1,800-km border with Pakistan would require a huge military effort. Hundreds of dirt roads and mountain trails cross the frontier, many

cross many of them through country accessible only by foot or on horseback. The Mojaheddin are masters of such terrain. They attack Soviet patrols at their most vulnerable moments—ranged in single file along a narrow mountain pass —then melt back into the hills.

Eerie: Still, travel to the interior is increasingly difficult. The rural population is decreasing, lessening the support for the Mojaheddin. On the plain of Paktia, known locally as Zurmat, I passed through village after village where not a single living soul remained. Before the Soviet invasion Zurmat had been a thriving collection of farming villages surrounded by well-irrigated land and inhabited by half a million people. Now, an estimated 90 per cent of the prewar population has vanished, either killed or moved to refugee camps in Pakistan. Buildings have

been bombed to rubble. Irrigation canals are clogged with debris. An eerie silence haunts the countryside.

At one house, a young farmer, Mohammed Omar, offered us a breakfast of nan, or unleavened bread, and tea—and a graphic account of the war’s impact. Before 1979 he had produced hundreds of bushels of wheat and rice each year, owned 100 sheep and 10 cows, and he hired hands to help with the harvest. Many animals have since been strafed to death by Soviet jets. More starved after soldiers burned his crops. Now, with his wife and three children in a Pakistani refugee camp, Omar works his fields by night to avoid Soviet air strikes. “I will stay here until Afghanistan is once

again free,” he said. “But many of the others have gone away.”

Itics of “migratory genocide,” I saw much to support those claims. I travelled through four Afghan provinces —Paktia, Logar, Wardak and Ghazni. Everywhere people told the same stories: forced conscription, farm animals shot, crops burned. Our caravan sometimes had trouble finding food, lodging and fodder. At one mud-walled chai khana (tea house), we were charged 500 Afghanis (about $15) for tea and nan. Nekh Mahomet protested, but finally paid. Otherwise, he knew, he might find no food at all the next time he passed.

Exodus: At the end of our week-long march we reached Amin Wardak’s base at Jughtu. Wardak, 34, well over six feet tall, with a full, black beard, calls to mind a young Fidel Castro, an impression enhanced by his olive-green battle fatigues. Studying law at Kabul University when the Soviets invaded, he returned to his native Wardak province

I and now commands some 5,000 men. “In all wars there must be military, political and civil organization,” Wardak told me during a late-night interview in his mountain redoubt. He spoke fluent French. “If we have all of these, than we can beat the Russians. If not, we’ll never win. I believe that the civilian infrastructure is the most important of all. Only this can prevent our people from running away.”

To slow the exodus to Pakistan, Wardak has set up permanent medical clinics with French doctors, established 10 primary schools and started a food welfare program. He declared, “It is more useful to build a school than to blow up a tank.” The effort is paying off. Only

about 100 families have left the province for Pakistan since December, 1979, far fewer than in neighboring provinces.

Offensively, Wardak’s commandos have joined other guerrillas in co-ordinated rocket and bazooka attacks on the Soviet airbase at Ghazni. Situated on the only real Afghan highway, between Kabul and the southern city of Kandahar, Ghazni is a vital link for Soviet transport. Most of the city was destroyed last winter. Its western sector is a ghost town, its homes bombed-out shells, its streets pockmarked with craters. “Ghazni has become a point of honor for us,” Wardak said. “The killing of women and children cannot go unpunished. We plan to go on attacking them. And I will take a hundred journalists to

Ghazni if that is what I must do to show the world what happened.”

But Wardak receives few intelligence reports. Operations are limited to hasty nighttime attacks. “It should be obvious to everyone what the Russians are doing,” said Abdul Ghafur, acting administrator of the National Islamic Front. “There are five million Afghan refugees in Pakistan and Iran and another million internal refugees. Moscow wants Afghanistan even if there are no more Afghans left living in it.”

Aggravates: Already, according to French doctors, the mortality rate during the first five years of life is approaching 50 per cent—twice the 1979 rate. Malnutrition is common, disease on the rise. “At this rate,” said Dr. Phillipe Truze, organizer of an immunization program in Wardak province, “in 10 years there will not be anyone left to fight the Russians.”

Aside from French medical teams and representatives of other small European aid groups, little help reaches the guerrillas. Larger organizations, such as the Red Cross, concentrate relief efforts on the refugee camps in Pakistan. That focus only aggravates the guerrilla cause. “If everything is so much better in the camps,” said one of my escorts as we set out on our return trip, “more people will leave their homes.”

When we left Jughtu, winter was already setting in. The leaves had disappeared from the trees, and the nights were bitterly cold. The trails were deserted. Tens of thousands had fled. In the spring some would return to their villages and farms. But many others had clearly made that hard and dangerous journey for the last time. —Richard M. Evans is a Paris-based journalist. 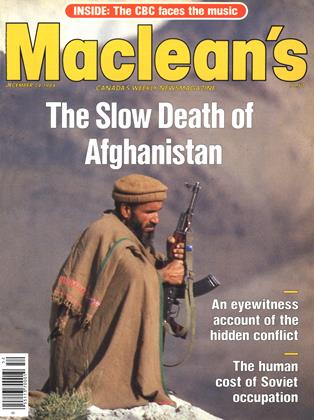