Yuri Andropov, 69, president of the Soviet Union. The son of a railroad worker and former head of the KGB, Andropov was seriously ill for nearly half his 15-month rule. That prevented him from pursuing his campaign to revitalize Soviet industry. A hard-liner toward the United States, Andropov did not attain his stated goal of stopping the deployment of U.S. cruise and Pershing II missiles in Western Europe.

William (Count) Basie, 79, American pianist and bandleader who started as a $3-a-night piano player in a Chinese restaurant in New Jersey and became one of the leading bandleaders of the Big Band era of the 1930s and 1940s. He mastered a flowing, rhythmic jazz sound which one critic likened to “jumping into the centre of a whirlwind.”

Roloff Beny, 60, the internationally known Canadian photographer who produced 12 books of photography and contributed regularly to Life magazine. A native of Medicine Hat, Alta., Beny had lived in Rome since 1956, producing exquisite picture books on several parts of the world as well as his 1967 tribute to Canada’s centennial, To Everything There Is A Season.

Richard Burton, 58, the Welsh actor with the booming voice who was as famous for his stormy private life—including two marriages to Elizabeth Taylor and legendary bouts of drinking—as for his acting. A coal miner’s son, Burton was a successful London stage actor before appearing in 54 films, including Cleopatra and Who’s Afraid of Virginia Woolf? He left a $4.5-million estate, surprising friends who were convinced that his extravagant lifestyle had left him penniless.

Clarence Campbell, 78, strong-willed president of the National Hockey League from 1946 to 1977. In March, 1955, he provoked a riot when he appeared at the Montreal Forum, home of hockey’s Canadiens. He had suspended the team’s legendary right winger, Maurice (Rocket) Richard, for the rest of the season for hitting an opponent with his stick.

Truman Capote, 59, the flamboy American author who explored theme of innocence amid corruptioi novels such as Breakfast at Tiffar, But he was best-known for In C Blood, published in 1965. A deta account of the brutal slaughter c Kansas family, the book launche new literary genre combining jouri ism with fiction.

David, 12, the “Bubble Boy” who s vived just 15 days outside the ste plastic enclosure in which he had li since infancy because his body cc not fight disease. His surname 1 never revealed. Houston doctors ' removed him from his plastic sh: when a bone marrow transplant not cure his severe combined immu deficiency disease. During those fi days David’s mother was able to J him for the first time.

Baby Fae, one month old, the f human to undergo a heart transpl with a simian heart. When the Cali: nia infant, whose family name 1 never made public, was born wit malformed heart, doctors replace with a walnut-sized baboon he Baby Fae drew worldwide attentioi she struggled to survive for aln three weeks before succumbing to jection problems and kidney failur

James Fixx, 52, the American gun jogging, who died instantly of a n sive heart attack while running in ral Vermont during a vacation. I merly an overweight smoker, became a running enthusiast wrote the 1977 best seller The C plete Book of Running. Fixx convir countless North Americans to jog ) ularly in order to increase their expectancy and decrease the risl heart attacks.

Indira Gandhi, 66, the imperious prime minister of India, killed by two of her own Sikh bodyguards in reprisal for her government’s raid last June on rebels occupying the Sikhs’ holy Golden Temple in Amritsar. Following in the footsteps of her father, Jawaharlal Nehru, India’s first prime minister, Gandhi became the country’s third leader in 1966. She acquired a reputation as a ruthless politician in her 15 years at the helm of the world’s most populous democracy.

Marvin Gaye, 44, the sultry-voiced American soul singer whose minister father, 70-year-old Marvin Gay Sr., shot him to death in an argument. During the 1960s Gaye recorded a series of classic rhythm-and-blues songs for the Motown label, including I Heard It Through the Grapevine. Later he became a balladeer of eroticism and made a big comeback in 1983 with Sexual Healing, which won two Grammy Awards.

Bora Laskin, 71, the 14th chief justice of the Supreme Court of Canada and a Companion of the Order of Canada who presided over the court when it helped to pave the way for patriation of the Constitution. Born in Fort William (now Thunder Bay), Ont., Laskin was the first Jew ever to sit on the court, serving as chief justice for 14 years and frequently taking a progressive stand on issues.

Arthur Maloney, 64, the former Conservative MP and brilliant criminal lawyer who spearheaded the movement to end capital punishment in Canada. A passionate civil libertarian, Maloney served 3V2 stormy years as Ontario’s first ombudsman, reinforcing his reputation as a defender of “the little guy.”

James Mason, 75, the English actor who played 130 diverse roles but specialized in portraying the suave English gentleman. In recent years the silky-voiced actor was acclaimed for his portrayals of Humbert Humbert in Lolita and Doctor Watson in Murder by Decree, but one of his greatest performances was as Judy Garland’s costar in the 1954 film A Star Is Born.

Ethel Merman, 76, the brassy American star of stage and screen whose booming voice became famous for songs such as There ’s No Business Like Show Business. The untrained singer was a fixture on the Broadway stage during the 1930s but went on to appear in several musical films, saying of her technique, “I just stand up and holler and hope my voice holds out.”

Mikhail Sholokhov, 78, one of the few

Soviet authors to gain an international reputation while avoiding conflict with the authorities, mainly because of his lifelong support for the Soviet system and his condemnation of dissident writers. In 1965 he won a Nobel Prize for his four-volume novel, And Quiet Flows the Don, but exiled Soviet writer Alexander Solzhenitsyn alleged that Sholokhov had plagiarized the epic.

Gordon Sinclair, 83, the Toronto journalist and broadcaster known for his kilts, bow ties and aggressive interviewing style. The son of poor Scottish immigrants in Toronto’s Cabbagetown slum, he went to work as a newspaper reporter and later became a radio broadcaster. For 27 years, starting with its debut in 1957, he was a panellist on the CBC TV show Front Page Challenge and delighted in asking guests how much money they made.

François Truffaut, 52, the pioneering French film director. Originally a film critic, Truffaut went on to make more than 20 feature films, most of which are suffused with a sweet romanticism. A member of the French “New Wave” film movement, which emphasized the director’s individual style, he was best-known for Jules and Jim and Day for Night.

the American swimming champion in the 1924 and 1928 Olympics, who swung from trees, wrestled with crocodiles and pounded his chest in almost 20 Tarzan movies until he retired from the role in 1927. Of playing Tarzan, he said: “It was like stealing. How can a guy climb trees, say, ‘Me Tarzan, you Jane’ and make a million?” 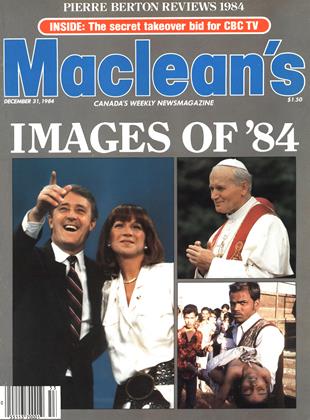