CKBT-TV weatherman Bryce Eckstein in Regina said that he gets “a lot of heat” from the public whenever his forecasts, based on Environment Canada information, are wrong. He added that a few people react with “absolute, utter vengeance.” But Eckstein will soon be able to announce his forecasts with greater confidence because of the new CRAY IS 1300 computer unveiled last week at the Canadian Meteorological Centre in the Mon-

treal suburb of Dorval. The advance should bring more credibility to predictions used by environmentalists, farmers and resort operators.

Scientists say that the CRAY, one of the fastest computers in the world and the first so-called supercomputer in Canada, will permit them to make more detailed forecasts. The machine will also enable weathermen to issue accurate 10-day forecasts, compared to the current five-day predictions. Capable of more than 50 million calculations per second, the computer will allow experts to perform sophisticated studies on more enduring problems, such as the global warming, called the “greenhouse effect,” which is expected to result from the buildup of carbon dioxide in the atmosphere. More important, it will advance the work being done toward long-

range seasonal forecasts, which are crucially important to Canada’s agricultural and tourist industries. The computer will also help scientists to predict the effects of climatic upheavals, such as major volcanic eruptions.

In appearance, the new computer, the most powerful of about 20 used worldwide for meteorology, is relatively small. But the $32-million, five-ton machine is 16 times faster than its 17-yearold predecessor, the Cyber 176. It is Environment Canada’s fifth computer since the technology became an integral

part of Canadian weather forecasting 20 years ago, and the cost includes provision for an even faster model in two years. Like its predecessors, the new computer will be connected to a global weather data network.

To make weather predictions, meteorologists traditionally study national cloud, wind and temperature conditions and predict how they will evolve based on past experience. But they also rely on what the computer discloses, especially for forecasts beyond 24 hours. The computer is programmed with a weather “model,” an extremely complex set of mathematical equations that actually simulates the current global weather patterns and takes into account the Earth’s topography, the position of the sun and other interrelated factors. Twice a day computers around the

world feed local weather conditions into the CRAY, which then processes the data to produce a 24-hour Canadian forecast.

Meteorologists will program the new computer with a model that simulates weather for the entire globe and not only the Northern Hemisphere, which is all that the old computer could handle. The new model will issue predictions based on data from more than 10,000 worldwide observation sites, plus information from ships, weather balloons, aircraft and satellites. As an indication of the international scope of weather forecasting, 10 dignitaries attended last week’s unveiling, including Nigeria’s Godwin Olu Patrick Obasi, secretary-general of the 157-member World Meteorological Organization, and Zou Jingmeng of the Chinese Meteorological Administration.

With the new computer, scientists will be able to study environmental problems that are linked to climate more effectively, as well as the impact of climatic disturbances such as El Niño, the warm current in the Pacific Ocean that created storms which wreaked havoc on the coast of California last year. What is more, it will be a boon to g a new study on the sources of

1 and areas affected by acid rain, g a joint undertaking by the fedû eral Atmospheric Environment

2 Service, the province of Ontario 1 and West Germany. James

Bruce, head of the AES and assistant deputy minister of Environment Canada, said studies with the new computer will bolster Canada’s contention that some of the country’s acid rain comes from emissions of sulphur dioxide from the United States.

But despite its capacity, the new computer will not permit climatologists to realize fully their long-term goal of making accurate seasonal forecasts. For now, Canadians can look forward to more accurate short-term forecasts and, by 1987, 10-day outlooks. But however accurate weather forecasts become, at least one TV weatherman is not convinced that Canadians will ever be satisfied. Said Murray Parker, a 10-year veteran of Winnipeg’s CBWT: “I do not think we will get away from the flak entirely. I think even 500 years from now Canadians will complain about the weather.” 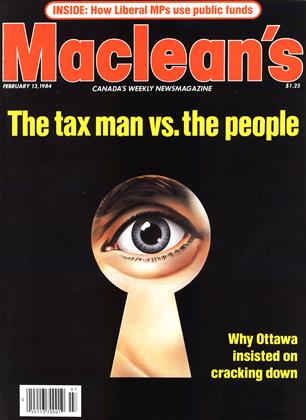