In Sarajevo early last week, birds sang in the springlike air and on tiny farms outside the city sheep nibbled at cones of stacked hay. Typically, a polite guide looked to the sky and exclaimed: “No snow. Sorry.” But by midweek Yugoslavs did not have to make any apology for the XIV Olympic Winter Games. To the delight of organizers, the snow fell and fell. Houses took on new shapes, traffic ground to a halt, and so did much of the Games—except for the indoor sports and the international deals.

At the end of the first four days of competition, East Germany and the Soviet Union led in the medal count. Canada stood seventh. For Canada the opening days produced mixed blessings. Long-distance speed skating specialist Gaétan Boucher won Canada’s only medal of the first week with a surprising third-place finish in the 500-m sprint. With two longer races to come this week, Ste-Foy, Quebec’s Boucher aspired to become the first Canadian in Games history to win more than two individual medals. Boucher, however, was realistic about the likely impact of his success. “Speed skating is not a glamorous sport,” he allowed. “Being a Canadian hero is not up to me. And if I were an English Canadian, it could be different.”

In hockey action Canada advanced to the medal round after a crucial 4-2 win Saturday against Finland. Earlier, Canada routed Austria 8-1 and scored a 4-2 triumph over the tense skaters from the United States.

In figure skating, by contrast, the nation’s hopes sank when attractive pairs skaters Barbara Underhill and Paul Martini crashed to the ice during the short program. Skating to the beat of Gene Krupa’s Sing, Sing, Sing, Underhill missed one of the simplest required manoeuvres—a sit spin—and the couple landed disappointingly in sixth place going into Sunday’s decisive free-skating program.

On Mount Bjelasnica and Mount Jahorina the long-awaited men’s and women’s downhill races were delayed because of 80-m.p.h. winds and drifting snow. As a result, Canadians were mostly concerned about what took place indoors. The action began before the opening hockey game, when the International Olympic Committee (IOC) ruled that two Canadian players were ineligible because they had played some games in the National Hockey League. Canada’s minister of amateur sports, Jacques Olivier, met with the Calgary Olympic Committee to deal with the dispute about funding the 1988 Games (following story). Olivier, a friend of Montreal Canadiens’ General Manager Serge Savard, also met with his counterparts from the Soviet Union to discuss the possibility that goalie Vladislav Tretiak might play in the NHL.

The Olympic idea of amateurism has been in jeopardy since the first athletic hero was worshipped. In what Hockey Canada hoped would be a first step in opening the 1988 Calgary Olympics to professional players, the team took on four players who had signed professional contracts. On the eve of the Games, the Finns protested. The IOC then decided that a player who had played even one brief shift in the NHL was ineligible. As a result, Canada lost forward Mark Morrison and defenceman Don Dietrich hours before the opening match against the United States. Curiously, Toronto-born Richard Cunningham of the Austrian team, who played more than 300 games in the now defunct World Hockey Association, was not affected by the IOC ruling. Although Team Canada skated without Morrison and Dietrich, it enjoyed the loyalty of an impromptu fan club—a group of eight young Yugoslavs who fashioned a 10-foot by 4-foot banner resembling a flag with the exhortation “Go Cdn” on the red borders. ABC television disliked every minute of the display. At the height of the ratings period back home, ABC banked heavily on hockey—and the dream that the U.S.

hockey team would repeat its miraculous gold-medal performance of 1980 at Lake Placid. Two days later, after the Czechs defeated the United States 4-1, hopes for a medal of any color were dashed.

The Canadiens’ Savard was more encouraged by his stay in Sarajevo. When the Canadiens drafted 32-year-old Tretiak last year, hockey insiders regarded it as a fruitless gesture. While the Soviets have released some of their international players to professional leagues in Europe and Japan, none of them has been in his prime.

Before the Games, Tretiak, arguably the best goalie in the world, invoked supreme authority when reporters asked him if he would join the Canadiens. “Only God knows,” he replied. Late last week Ottawa’s Olivier emerged from a meeting with Vladimirovitch Gramov, president of the committee for physical culture and sports of the Soviet Union, and told a hastily called press conference in the lobby of the Holiday Inn in Sarajevo, “It appears that we can sign an agreement within a few weeks or a month.” Said Savard: “I think that we have some chance to get Tretiak. I don’t think the chances are that great, but now I guess I’m more optimistic. But I don’t know if it’s really up to Tretiak.” Savard

said that Tretiak had not been given a contract but a “proposal.” Then he added, “Now we just wait for a ‘yes’ or a ‘no.’ ”

Tretiak, however, claimed not to know about the proposal. When Gramov handed Tretiak the proposal, he asked the goalie, “Have you seen this before?” Tretiak’s response: “Nyet.” At the end of week one, the Canadian team was solidly on course for its best Olympics since 1932. The Americans, on the other hand, had won no medals, and ABC no Emmy Awards. 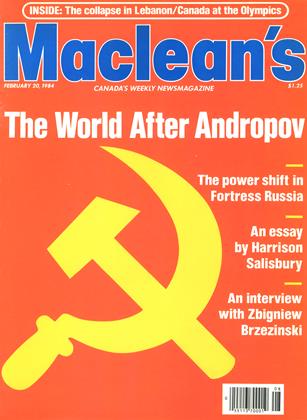