In an age when dissent from convention is rare, it is refreshing to see that Germaine Greer has come up with a debate more radical in scope and attitude than even her provocative 1970 best seller, The Female Eunuch. Her new book, Sex and Destiny, a defiantly antimodern study of the “politics of human fertility,” is as crucial to any discussion of the future as Jonathan Schell’s exploration of the nuclear nightmare, The Fate of the Earth—a title Greer considered for her own book. Some readers might regard her subject matter as less intellectually glamorous than counting missiles. Such a response will simply confirm one of Greer’s main points, which is that Western society has grown fatally indifferent to the values of fertility, motherhood and family.

By family, Greer means the large, traditional “kinship systems” that still prevail in cultures other than the West, where, she writes, “the family has withered away and only the couple, united by a fragile sexual bond, remains.” Westerners, Greer argues, “do not like children.” In her research in Italy, India and other parts of the Third World, Greer has studied communities in which the role of mother carries status and children are at the centre of family life. In less developed, “overpopulated” countries, Greer found fewer unwanted children than in her own culture. She writes, “Modern society is unique in that it is profoundly hostile to children.”

Greer says that not only does Western society segregate children once they arrive, but it will go to any lengths not to have them in the first place. She finds repugnant the nonchalance with which people choose sterilization as their method of birth control, especially because the effects of forfeiting fertility are still unclear. “The oldest surviving vasectomy patient is an ape,” she writes, “who is far from well.” Her

characterizations of the Pill and the intrauterine device are similarly vivid: the IUD, which functions by inducing early abortions, transforms the uterus into a “poisonous abattoir”; taking a drug as powerful as the Pill is “like using a steamroller to crush a frog.” Greer argues that modern contraception, hailed as the emancipator of women, has simply offered them new

routes to sexual passivity. The woman who chooses the IUD “is an unwitting accomplice in what she may well consider to be a crime”—abortion. Uncritical dependence upon mechanical and chemical means of birth control provides Greer with additional evidence of “our deep unwillingness to put fertility within the individual’s control.”

Her sophisticated attacks on the state of contraception are not based on opposition to birth control itself. Instead, she questions the abandonment of such time-honored methods as periodic abstinence and the condom. What is really required is enlightened sex education, especially re-educating young girls to understand, respect and protect their fertility. For a woman to abstain is not a sacrifice of her sexuality, Greer says, but a recognition that sex includes the potential of procreation as well as recreation.

However, the “slow suicide” of her own culture is of less concern to Greer than its imposition of values and birth control programs on other countries, especially poor ones. She considers the intrusion of the “family planners” not just arrogant but “evil,” as if the West were waging an unconscious war on reproduction in the name of foreign aid, altruism and population control. Why should the West presume that the rest of the world wants more sex and fewer children, Greer asks, adding that “most of the pleasure in the world is still provided by children and not by genital dabbling.”

Greer’s impatience with what she calls the modern “religion of sex” is certain to lead to charges that she has abandoned her old freedom-fighting days. But, in fact, Sex and Destiny represents a deepening and broadening of the ideas in The Female Eunuch, as Greer hinted in a new introduction to that book in 1980: “...In the sense that they are isolated from their own sex, g Western women are more S irrevocably crippled than 3 women living in tradi-

1 of a woman to control her own sexuality—the theme of her first book—has become the right of other cultures to control their own fertility.

Greer has also left herself vulnerable to misinterpretation by writing in an elitist style. A former Shakespeare scholar, she wields a protean vocabulary and gallops along astride a herd of polysyllables and technical terms. As well, she has not entirely repressed her fondness for caricature, which sometimes weakens her argument. In discussions of the gadgets that are used for contraception she is amusing, but when she writes about “merry-faced farmworkers” she succumbs to stereotypes. Still, her tendency to overstate is also a gift, because the issues at stake are lifeand-death ones obscured by habit, delusion and orthodoxy. Going too far is precisely what Greer does well—in her language, her outrage and her talent for forcing her audience to think. 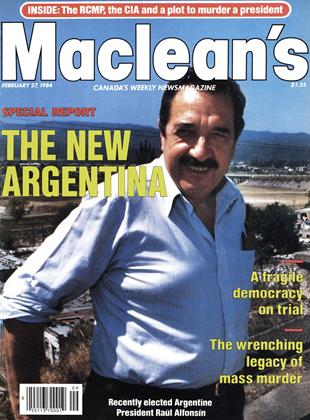