They massed in Paris’s Place de la Concorde, their angry faces partly hidden under hard hats and lanterns. But the threatening spectre of 10,000 miners who marched on the French capital last week failed to budge France’s state-run coal board. As the miners brandished placards demanding “no to liquidation” and “bring back coal,” the directors of the Charbonnages de France confirmed their determination to eliminate an estimated 28,000 pit jobs by 1988 in an effort to save the country’s coal industry.

But for the nervous government of President François Mitterrand, the coal miners’ fury was a foretaste of the labor uproar that may come in the face of his biggest economic gamble to date: a newly unveiled $850-million plan to buy a modernization of the country’s lameduck industries. The project is not only the most ambitious streamlining ever undertaken in Europe but it also may be the riskiest. Mitterrand’s Socialists, who swept into office nearly three years ago on a promise of braking unemployment, now find themselves presiding over a blueprint that will cost at least 60,000 heavy-industry jobs alone by the end of the decade. Worse, it promises to cause a stormy year of strikes as a protest against the prospective layoffs at a time when French industry has just regained a slim export surplus.

The French cabinet approved the restructuring plan last month, but only a portion of it has been made public to date. Its main targets are the outmoded and inefficient steel, coal, shipbuilding and automobile industries. As well, the scheme proposes to streamline the country’s growing telecommunications business. In a bid for labor’s consent, the plan includes a multimillion-dollar package of measures that the government hopes will take the sting out of job losses. They include pensions for workers who take early retirement at age 55, compensation for immigrant workers who volunteer to return home and a two-year retraining leave for an estimated 15,000 workers. Under the plan they would get 70 per cent of their salary while learning new trades. As well, the government has singled out 14 industrial conversion zones, in the country’s hardest-hit regions, for special aid and job creation incentives.

Still, even the pro-Socialist miners’ union charges that the plan discriminates against laid-off workers who do not come from either a restructured sector or a conversion zone. Said union chief Edmond Maire: “This means there

could be good and bad unemployed.” What is more, some Socialists have blanched at the government’s betrayal of its job creation platform while others pointedly demand to know precisely where the financing will come from. Indeed, that question still remains largely unanswered, despite the fact that Mitterrand has promised to reduce taxes by a startling $9.5 billion next year.

None of the scheme’s critics has questioned the need to revive France’s sagging industrial framework. The steel industry is encumbered by antiquated equipment and is often outbid by Third World competition. But the government’s proposed elimination of 11,000 jobs risks provoking bitter revolts in the already depressed region of Lorraine. Last week 800 workers paralysed traffic in Metz by laying vast coils of steel in the downtown streets; police eventually had to cut the coils with blowtorches.

The coal industry, which last year chalked up losses of more than $100 million, is in a more perilous situation. Currently, government subsidies keep French coal competitive against foreign imports. As a result, every ton of coal which French firms sell for $63 costs the government more than $100 to mine. Now, with coal providing only 14 per cent of France’s energy needs, the government plans to reduce annual pro-

duction to 10 million from 18 million tons.

The government has not yet revealed its plans for the car industry. But Régie Nationale des Usines Renault—the state-owned automobile giant—has already announced plans to cut 7,250 jobs. Similarly, the ailing—and privately owned—Peugeot-Talbot-Citroën group is preparing for 6,000 job cuts to reverse three years of growing losses. Those layoffs could prove stormy in light of this winter’s violent strikes by cutback-protesting immigrant Talbot employees.

The modernization plan and its attendant job cuts represent the final and most spectacular section of a complete economic U-turn for the Socialists, who entered office in 1981 promising economic expansion but became converts to austerity one year later. As economist Michel Cicurel points out in a new book called La France, Quandmème (France all the same), only the French Left could get away with such axewielding. Wrote Cicurel: “In the eyes of the population, if the Right preaches rigor, that’s because it’s the Right. If the Left takes up the same themes, the measures are seen as forced by the facts.” As France’s unions prepare to fight for their members’ jobs, they seem sure to put Cicurel’s theories to a harsh test. — MARCI MCDONALD in Paris. 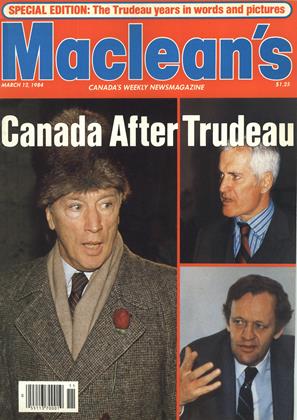