The first two applicants for the Prime Minister’s job officially entered the Liberal leadership race, grabbing public attention while prospective rivals made last-minute appeals for money and support. Nine days after Pierre Trudeau resigned, Economic Development Minister Donald Johnston promised “a fresh start and a fresh agenda.” But Johnston did not have the field to himself for long. Justice Minister Mark MacGuigan planned to begin his campaign on the weekend in traditionally Tory Alberta, making an appearance with Edmonton Mayor Lawrence Decore and other local Liberals. Most of the declared and undeclared candidates alike had one common preoccupation: the fear that a leadership convention would be merely a coronation for former finance minister John Turner.

The leadership race has focused attention on the Liberals just as the party closed to within 12 points of the Tories in the Gallup poll (following story). It also made Bay Street lawyer Turner a target even before his expected entry into the race this week. Energy Minister Jean Chrétien, for one, rejected the Liberal tradition of alternating Frenchand English-speaking leaders—a custom that favors Turner. Chrétien himself has not yet entered the contest but he declared pointedly last week that Liberals will have to choose “a leader who reflects Main Street, not Bay

Street.” And even though the campaign is barely under way, it poses special problems for both party organizers and cabinet ministers alike. Liberal officials do not want to repeat mistakes made by the Conservatives during their leadership contest, when derelicts and children voted at delegate selection meetings. Even Trudeau has become involved. He warned his ministers to be on guard for a snap vote of confidence in the Commons and asked MPs to check with his office before leaving town.

As the first official candidate, Johnston already has a solid organization busy finding potential delegates. But he has one considerable handicap: a low public profile. Johnston, a 47-year-old former tax lawyer and Montreal MP, already has the support of a majority of the party’s prestigious policy committee. He will concentrate on issues that will be increasingly important in the future—such as equal benefits from technological change. Johnston argues that his reputation as a right-wing Liberal will not limit his appeal:

MacGuigan also has a reputation for being strong on issues but uncharismatic. The 53year-old former law professor has put together a respectable organization to help his cause, primarily in the Prairies, the Maritimes and southern Ontario. And, although publicity for planned judicial reforms has raised his political profile, his campaign will concentrate on economic issues. Said MacGuigan: “The key to the Canada of the 1980s is our economic vigor. Without a productive, co-operative economy, there will be less social justice, more regionalism and more political discord.” While attention focused on Johnston and MacGuigan, Turner and several key aides met in Toronto last week to telephone supporters and assemble a campaign team. “The response is even more than we anticipated—we can’t physically keep up,” said Vancouver lawyer John Swift. The small planning group also is searching for well-known Canadians who would stand with Turner as Liberal candidates. “If he does run for the leadership, we are going to have to demonstrate that we are new and current and in touch with the people, something like New Liberals for Turner,” said Swift. “We have identified about 10 good ones already—it’s a serious effort to find competent new people.”

Even as Turner prepared to enter the race, Jean Chrétien discovered that his support in Quebec was eroding. Minister of State for Youth Céline HervieuxPayette declared that an English-speaking candidate would help increase the party’s support outside Quebec. And other Quebec MPs have encouraged Chrétien to seek the □ leadership but refused to 8 endorse him publicly. S Chrétien supporters “ quickly blamed the fasciI nation of the press with

Turner and continued references to the party’s tradition of alternating francophone and anglophone leaders for hurting their man. Ontario MP Ron Irwin, a Chrétien supporter, said, “My advice to him is, ‘Do not run unless support in French Canada is there.’ The things that are Chrétien’s strengths in English Canada—his populism and his man-of-the-people image—are hurting him in French Canada.” Stung by that unexpected reaction in his home province, Chrétien is still considering giving up the race and challenged his fellow Liberals to say that ethnic considerations should not be a factor in choosing a new leader. Twenty-four hours earlier Trudeau himself stepped in at a caucus meeting and said that delegates should select the best man or woman for the job. Clearly, Trudeau’s comments revived the spirits of Chrétien loyalists, and Ontario MP Keith Penner predicted that the energy minister would soon declare his candidacy—with as many as 50 MPs arrayed behind him in a public show of strength. “It is 90-per-cent certain that he will go,” declared Penner.

Jean Chrétien, the self-styled “guy from Shawinigan,” would be a strong Quebec candidate at the convention, but less visible potential candidates were also considering jumping into the race last week. Employment Minister John Roberts has recently carried the government’s defence against opposition charges that he used federal job creation funds as a source of Liberal patronage. But, despite this adverse publicity, Roberts is likely to announce his campaign for a “new Liberalism” this week, even though party insiders say that his organization and financial backing are weak. In the federal cabinet alone, Agriculture Minister Eugene Whelan, Health Minister Monique Bégin, Indian Affairs Minister John Munro and International Trade Minister Gerald Regan are all assessing their chances of winning. Whelan, for one, thinks that he would be the best man for the job because he understands ordinary Canadians. “You need a Liberal leader who understands Canada,” he said. “The vast majority of Canadians are ordinary people.”

As for the orders directed at travelling candidates, Trudeau could point to historical precedent. In 1968, before he won the leadership, the opposition defeated the government on a tax bill while many Liberal MPs were campaigning across the country. But, while party whip Charles Turner will try to give the contenders in the caucus equal amounts of travel time, he wants them to stick to his timetable. Said Turner: “It is a vicious game with the Tories these days—and the game for us is to stay in power.” -REPORTED BY 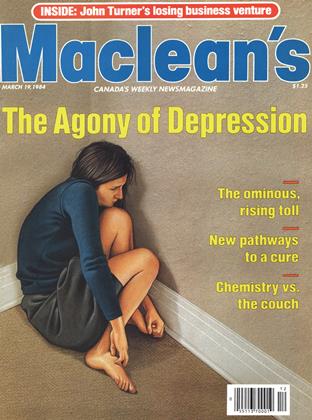