When British Columbia’s finance minister, Hugh Curtis, brought down a new provincial budget last week, his themes were grimly familiar. To continue the campaign of government spending restraint, taxes will rise, more social services will be cut, and another 4,400 civil service jobs will be eliminated. Then Curtis projected a budget deficit of about $700 million, dramatically less than the $1.3-billion shortfall predicted in last July’s budget. But the finance minister’s fiscal plan offered little comfort to the more than 200,000 British Columbians who are jobless—in fact, in Curtis’s 90-minute, 10,000-word speech the word “unemployment” was not mentioned once. Above all, the budget signalled that the Social Credit government of Premier William Bennett—de-

spite last year’s labor unrest and a series of unprecedented public protests— plans to stay the course of restraint on which it embarked seven months ago.

Curtis reduced spending for social services, municipalities, education and the management of British Columbia’s forests. At the same time, a continuing squeeze on the civil service will eliminate by attrition roughly 4,400 jobs in addition to the 4,000 cut last year. The finance minister also shrank support systems for the poor—funding for the province’s legal aid and pharmacare programs will be reduced—and for the unemployed. Welfare payments for single people and for young, childless couples will be reduced to $350 from $375 a month. In addition, funding for job creation and retraining programs for the province’s unemployed, who make

up 15.2 per cent of the labor force, was cut by 15 per cent. For the province’s jobless, said Richard McAlary, chief economist of the B.C. Central Credit Union, “It was a no-hope budget.”

One aspect of Curtis’s budget that will likely be examined closely by other provinces is a measure that he used to skirt the current federal-provincial deadlock over medicare policy. The budget imposed an eight-per-cent health care maintenance tax on British Columbians which will raise $97 million this year to offset the shortfall in the province’s $2.54-billion health bill. Curtis blamed the tax on Ottawa, which he claimed has reneged on its traditional agreement to share medicare costs equally and now is picking up only 43 per cent of British Columbia’s health care expenses. The new tax will also

provide British Columbia with a cushion against federal financial penalties. Under Ottawa’s proposed Canada health act, the federal government would reduce federal medicare funding to provinces that allow extra-billing by doctors or that have hospital user fees, as British Columbia does. Asked about Curtis’s medicare ploy, federal Health Minister Monique Bégin declared: “The whole thing is a joke. It is pure politics.” But Alberta’s health minister, David Russell, commented, “It’s a move, I guess, many provinces are looking at.” Curtis, who described his proposals as a “breakthrough budget—the clearest evidence to date that the government’s restraint program is a success,” said Victoria will continue with the thrust to “privatize” government programs that began with the last bud-

get. The minister announced that the government plans to abandon programs that involve caring for homeless or abused children, children with behavioral problems and other similar programs. Recently, large advertisements have appeared in the classified section of Vancouver newspapers, asking for tenders on 22 programs for children that the government plans to close down by March 31. The government also intends to hand over regulation of the insurance, travel and real estate industries and of the Vancouver Stock Exchange to the private sector.

Curtis did come up with $470 million in new funding to help reduce the $610million debt of the B.C. Railway, a Crown corporation that has been involved in the development of the province’s big northeast coal project. That project now is in difficulty because of low world coal prices. David Stupich, finance critic for the opposition New Democrats, charged that the govern-

ment “plainly has huge financial losses to hide. The $470 million is just the beginning.”

The budget aroused the fury of labor leaders, but it seemed unlikely to provoke the massive public protests that erupted after Curtis’s last budget set the Bennett government on its austere new course. Art Kube, president of the B.C. Federation of Labor and a leader of Operation Solidarity—the coalition of labor and community groups that took the province to the brink of a general strike in October—denounced the budget as “madness” and “economic suicide.” But he admitted that no demonstrations were planned, perhaps indicating that because of the conservative mood of the day even political protests have entered into a period of restraint. 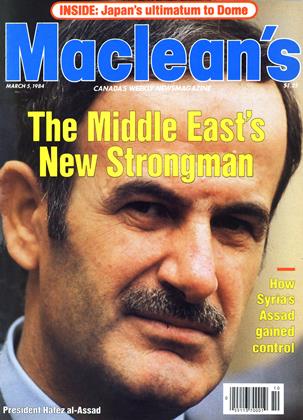