For strike-weary British Columbians the events of the week offered little promise of any relief from months of widespread labor unrest. In the province’s crowded Lower Mainland bus drivers routinely wore casual clothes instead of uniforms and they refused to collect full fares from their passengers. The reason: a monthlong “unstrike” that the transit workers were using to hasten slow contract negotiations with management. Throughout the province, 12,700 workers at 20 pulp mills ignored backto-work legislation, prolonging a stalemate that has cost the province almost $500 million in lost wages, sales and tax revenues since it began in February. And in downtown Vancouver the fate of the world trade fair, Expo 86, remained uncertain because construction unions refused to guarantee Premier William Bennett labor peace on the fair’s $3.6billion job site. Even the two daily newspapers that usually bring Vancouver residents details of the latest labor unrest— The Vancouver Sun and The Province—were themselves on strike (page 52).

Construction union officials and Expo 86 executives met daily in a secret location last week to try to forge an agreement allowing union members and unorganized labor to work together without friction. Still, it was the lengthy pulp and paper dispute that occupied most of the government’s attention. The legislation ordering the pulp companies to end a lockout did have one immediate result: it produced the first

serious negotiations between the two sides in two weeks. But Bennett’s intervention, which is being closely watched by other governments across the country, is the latest step in a plan to impose labor peace in the province. A poll conducted two months ago for the Social Credit government showed that 60 per cent of British Columbians want tougher laws for unions. Those results reflect sentiments current in the West, notably in Alberta and Saskatchewan. For his part, B.C. Labour Minister Robert McClelland hinted that pending changes to the province’s labor code might restrict picketing to companies directly involved in a labor dispute and ban work stoppages for political reasons. Declared Michael Walker, director of the Fraser Institute, a conservative think tank in Vancouver: “Bennett has given notice of a new reality. He is clearly saying that if the unions do not adjust to it, he will adjust them to it.” Added Paul Grayson, a specialist in Canadian labor at Toronto’s York University: “If Bennett wins, it will be a bellwether for governments across North America. Unions will have to fight back.”

Bennett’s tough stance seemed to stir up more tension last week. The passage of the back-towork bill after three days of intense debate in the

B.C. legislature angered pulp workers who immediately voted to turn the lockout into a strike. But the threat of a government-imposed settlement propelled the two sides into new negotiations. “It is chop chop legislation,” declared management representative Richard Lester. “You have to move or else, and now there is a clear willingness to get back to bargaining.” Arthur Gruntman, regional vice-president of the 7,700-member Canadian Paperworkers Union, and James Sloan, president of the smaller Pulp, Paper and Woodworkers of Canada union, agree with Lester. “We believe that we can do better at the bargaining table than we can do by a government-imposed agreement,” said Gruntman.

At the same time, a solution to the Expo 86 problem seemed imperiled. Rather than risk cost overruns and work stoppages, Bennett has threatened to cancel Expo 86 unless the province’s construction unions agree to work with unorganized labor. Expo cost projections are already $650 million over budget, and although Ottawa has promised to contribute toward the fair, British Columbia would have to absorb any deficit caused by the cancellation.

The B.C. government’s stand on the Expo issue follows legislative changes in Alberta and Saskatchewan last year which make it easier for construction firms to form nonunion subsidiaries that pay their employees below union scale. In Regina last week 600 angry construction workers demonstrated in front of the provincial legislature, charging that the increased use of nonunion labor had produced a 60-per-cent unemployment rate among the 9,000 members of building trade unions in Saskatchewan. “What is happening in British Columbia is not much different than what is occurring in Alberta and here,” said Lome McLaren, Saskatchewan’s minister of labor. “There is definitely a trend developing in Canada [toward nonunion labor].” Now Bennett wants to restrict union organizing in his province, most likely with laws that make it easier for workers to opt out of bargaining units. Any changes to the provincial labor code could lead to another confrontation with British Columbia’s powerful labor movement. And with polls indicating approval of his tough approach, Bennett is likely to intensify the fight. -JANE O’HARA in Vancouver, with Donald Wanagas in Edmonton, Dale Eisler in Saskatchewan and Robert Block in Toronto. 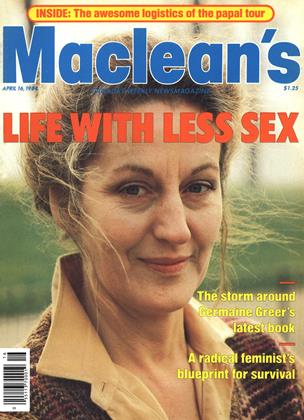