The outspoken Italian journalist Oriana Fallaci described her 1980 encounter with Col. Moammar Khadafy as “truly scary.” Said Fallaci: “If I were courageous, I would have killed him when I interviewed him.” Her reaction was not unique. Many world leaders share her opinion of the mercurial and menacing Libyan strongman. Denounced last week by U.S. Secretary of State George Shultz as a “troublemaker to the world,” the 42-year-old “guide to the revolution,” as he prefers to call himself, has earned other epithets not nearly so genteel. He is known for his penchant for hanging dissident students in public and for ordering the burning of the embassies of governments that displease him. And his political and diplomatic excesses are not easily ignored; the oil wells beneath his sparsely populated desert kingdom have financed his reputation as the paymaster of international terrorism.

the Philippines to El Salvador and Northern Ireland. According to even the most conservative intelligence estimates, he has been a patron of Palestinian extremists and Italy’s Red Brigades, played host to the shadowy superterrorist “Carlos,” and provided a welcoming committee for the assassins behind Munich’s 1972 Olympic massacre, as well as for countless airline hijackers.

Washington until three years ago, when Ronald Reagan assumed office—to remain largely silent in the face of his most outrageous provocations. But that power has also had a double edge. As the oil glut and Western wariness of doing business with Tripoli increased over recent years, so did discontent among the three million citizens suffering from plummeting revenues. Some analysts see a direct link between mounting domestic opposition and the vicious campaign Khadafy began four years ago to liquidate Libyan opponents of his regime abroad. Indeed, by exporting his state-backed terrorism to the Libyan diplomatic apparatus, as he did last week in London’s St. James’s Square, Khadafy has both sounded a

warning and created a spectacular diversion for his people, chafing against the reign of terror of his revolutionary committees at home.

Ever since he came to power in 1969 in a bloodless coup that toppled the corrupt regime of King Idris, Khadafy, the impulsive captain who promoted himself to colonel, has relished his wild-card role on the global scene. With a canny flair for public relations, he has cultivated his image as an eccentric planner of havoc at the crossroads of Africa and the Middle East. Preaching a puritanical brand of Islam, he clamped down on Western influence in his own country, banning alcohol, closing down nightclubs and foreign banks and even forbidding English lessons. But at the height of the crisis caused by his invasion of

Chad last summer, he turned up for a state visit to Tunisia—a neighbor threatened by Moslem militants— boasting a gun-toting, all-female squad of bodyguards, a strikingly ostentatious display for a Moslem leader.

Khadafy’s own brand of Marxism, laid out in three volumes of his so-called Green Book, patterned clearly on Mao’s little Red Book, proclaims his Third Universal Theory which calls for the elimination of all borders separating people. That ubiquitously displayed text has provided the philosophical underpinning for both his domestic power and for his foreign adventurism, including the funding of terrorism. Determined to eradicate the remaining old colonial boundaries of Africa, he financed ferment in the Sudan, Mauritius and Nigeria, supported successful coups in Ghana and Upper Volta and last summer he effectively annexed the northern part of Chad by invading it.

Hungry for international respectability, Khadafy has at the same time disdained it. At the very moment when he was seriously lobbying to lead the 50member Organization of African Unity, he alienated most of the continent’s leaders by backing its two most detested tyrants: deposed Central African Emperor Jean-Bédel Bokassa and Uganda’s ldi Amin Dada, who once basked in luxurious exile outside Tripoli. Such contradictions also doomed his messianic vision for a Pan-Arab union inspired by his late hero, Egypt’s

Gamal Abdel Nasser. His double dealing, support for local rebels and capricious outbursts of temper successively isolated him from Egypt, Tunisia, Morocco and other nations he has fervently courted. As well, despite its $13billion, Soviet-supplied arsenal, his ragtag 50,000-man Islamic Legion had registered losses until the Chad invasion last year.

The overall military failure of his forces may have spurred his efforts to do away with disliked governments by a more deadly underground route. In her controversial book The Terror Network— believed largely based on information supplied by Israeli and American intelligence—American journalist Claire Sterling calls Khadafy “the Daddy Warbucks of world terrorism.” Sterling contends that, almost from the moment Khadafy came to power 15 years ago, his petrodollars have bankrolled the dark dreams of a global web of national guerrilla movements.

By 1972 Khadafy had also set up guerrilla training camps in Tokra and Camp Az-Zauiah in the Sirte, where Cuban instructors offered advanced courses in sabotage and murder to members of Italy’s Red Brigades, the Japanese Red Army, West Germany’s Red Army Faction, Spain’s ETA Basque militants, French Breton separatists and the Irish Republican Army’s provos. The IRA was reportedly still training in Libya as late as 1980. He has also sent arms to Moslem rebels in the Philippines, as well as

But intelligence sources claim that since 1980, when his oil revenues abruptly plummeted to $7 billion from $22 billion, Khadafy has cut back his terrorist patronage and failed to make good on many of his financial promises.

The fallen oil revenues coincided with the first reports of unrest in the deeply tribal land in which Khadafy had been successful at playing off the competing tribal loyalties of the country’s two city-states, Tripoli and Benghazi. In 1980 several hundred were reportedly killed in an army mutiny near the Egyptian border. Exiled Libyan opposition

troops, who have been deprived of the latest in military hardware. The exit of U.S. oil interests two years ago after Reagan’s oil embargo sparked an exodus of foreign technical experts and skilled workers who had kept the economy buoyant. At the same time, shrinking revenues have brought shortages of essential foods, and Khadafy’s reliance on revolutionary People’s Committees to stamp out internal dissent has only fanned discontent. Inspired by Khadafy’s inflammatory rhetoric, the committees, comprised of hand-picked zealots, have expropriated shops and factories and squatted in houses left unattended for only a few hours. But the real focus of dissent has been the university. In 1982, 200 students

were arrested for protesting forced conscription.

Every time that revolt has flared at home Khadafy has raised the spectre of a common enemy abroad—his exiled opponents. In both 1980 and 1982 he incited his followers to “meet their full responsibilities of liquidating escaped agents of America”—a code phrase for opposition exiles. In 1980 alone, in response to that “licence to kill,” as one diplomat termed it, five opponents of Khadafy’s regime were murdered in Rome, three in Britain and one each in West Germany, Greece and Lebanon. In two of the British murders, the Libyan embassy, by then rechristened the People’s Bureau, was implicated for supplying arms or fingering the victim.

Other more recent attempts on Libyan lives in Paris and West Germany have been foiled, but the killings, intended to eradicate Khadafy’s opponents, have unified the disparate groups, giving them common fears and martyrs. As well, Khadafy’s perversion of diplomatic privilege for his bloody revenge campaign has now fanned international outrage in a way none of his other expansionist provocations have before. Khadafy’s actions have earned him the reputation of a dangerous political paranoid. Indeed, the enigmatic eccentric, who regularly retires to the desert where he was born to

brood on his ambiguous

place in the world, might well meditate now on one maxim of pop psychology: that paranoiacs frequently have reason to feel they have enemies. 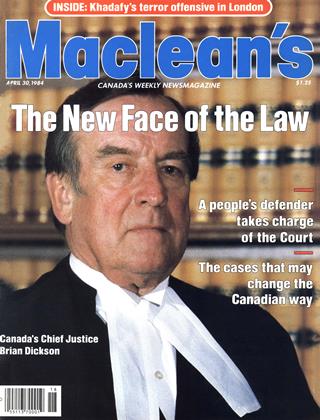