The compact radar system of the twin-engine Cessna Conquest turboprop scanned the frigid Beaufort Sea in 80to 160-foot swaths. As the plane flew at 33,000 feet, computerized equipment translated the readings into detailed images of moving ice floes. Within minutes the location of the menace was in the hands of the people who needed it—the crews of the drill ships whose operations are threatened by the Beaufort’s shifting ice. Such precise, up-to-the-minute data has been available to Beaufort drilling operations for the first time this year, and now the system’s developer, Intera Environmental Technologists of Calgary, is about to introduce it to the Hibernia region off Newfoundland.

Intera President Brian Bullock said that his company invested eight years and $8 million to develop a superior ice surveillance system to help petroleum companies explore Canada’s frigid and inhospitable frontiers. Other surveillance systems have not been able to pinpoint floes smaller than about 300 feet across, but the Intera system’s superior

resolution can spot floes as small as 20 feet in diameter. With northern drilling costing thousands of dollars an hour, current information means money to drilling companies. With detailed ice data, the crew of a drilling ship knows more precisely how long it can stay in

position before having to flee from threatening ice.

Dome Petroleum, the company that pioneered oil exploration in the icy Beaufort, concluded that Intera’s STAR1 (for sea-ice and terrain assessment radar) could produce the information it wanted. Under the terms of a threeyear, $6-million contract, Intera set up the STAR-1 surveillance flights from In-

uvik, N.W.T., this winter on a daily and sometimes twice-daily basis during drilling of a well named Kogyuk N-67. Said Dome’s environmental co-ordinator, J.W. Steen: “It is a superb instrument, the best there is.” But it is considerably more expensive than other systems, and it remained to be seen whether STAR-l’s additional information justified the extra costs. In the environmentally sensitive Beaufort, added Steen, “maybe the Canadian people would feel more secure knowing we are using the best system.” Each survey flight costs about $30,000, but, said Bullock, the STAR-1 “outperforms all radar systems available by 10 to 100 times.” The system has other possible applications, such as mapping terrain, oceanographic research, monitoring oil spills or guiding ship traffic. For now, Intera is concentrating on the drilling industry. Under a new contract with the federal Canadian Oil and Gas Lands Administration, the company began watching the movement of icebergs off the East Coast this week with flights from St. John’s. But Bullock has his eye on a projected $300-million worldwide market in radar surveillance hardware in the next five years. Said Bullock: “Intera intends to make Canada the dominant country providing radar systems around the world.” 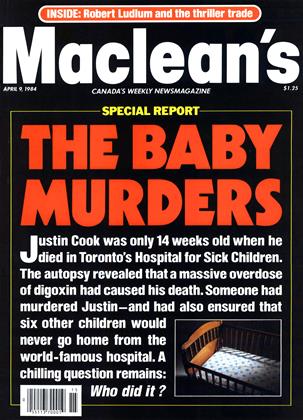