The dispute over homosexual ministers ANN WALMSLEY May 28 1984

Last March a United Church of Canada report created a fire storm of controversy when it recommended that admitted homosexuals should be allowed to join the ministry. The proposals of the church’s division of ministry personnel and education sharply divided liberal and evangelical contingents in the one-million-member church. Since then the church’s national office has received more than 400 letters from members indicating that the split has widened still further. And last week the church’s moderator, Rt. Rev. Clarke MacDonald, who had agonized over whether to speak out, did little to resolve the dispute when he announced that he will not take a public stand on the issue. Said MacDonald: “There is a time to prophesy and a time to heal.”

MacDonald’s stance mollified antihomosexual factions but it disappointed homosexuals in the church. The 3,000 members of the church’s conservative evangelical organization, Renewal Fellowship, say that ordaining known homosexual ministers would constitute a rejection of Old and New Testament scripture. The group argues that biblical passages in the books of Romans and Genesis portray homosexuality as a sin.

An informal survey that Renewal Fellowship conducted last month among 219 of British Columbia’s church administrators showed that 23 per cent of those who responded would leave the church if the report’s recommendations became policy and that 45 per cent would leave their home church if a homosexual minister were assigned there. But the church estimates that 10 per cent of the 4,000 United Church’s ordained clergy are homosexual. Many have publicly admitted they can no

longer lie about the fact that they are practising homosexuals. As a consequence, they fear that they could lose their jobs. Said Bill Siksay, spokesman for AFFIRM, a 200-member organization of homosexual congregants and clergy in the United Church: “The church cannot require us to stay in the closet when it realizes the compromise to our honesty.” MacDonald’s reluctance to take a stand on the issue is uncharacteristic. He has spoken out

passionately on issues ranging from nuclear disarmament to women’s rights. Said Eilert Frerichs, a United Church chaplain at the University of Toronto and one of the 10 per cent who has admitted his homosexuality: “I was very disappointed that on this issue, for whatever reason, he has not been able to show the same kind of leadership.” Church officials said that, for the most part, moderators do not express their views on matters that are not yet church policy. But MacDonald told Maclean's that his decision to remain neutral resulted from a desire to help heal the emotional wounds that the debate has been inflicting on church members. MacDonald said the degree of negative response indicated that the church moved too quickly on the issue.

gregations to study the matter for another two or three years. It is a prospect that distresses Siksay, who said, “It is like asking us to go back to the laboratory and be pricked and prodded and tested for three more years.” In his statement MacDonald said that he z wanted to avoid rubbing a “salt in the already I wounded body of the s church.” But by not tak% ing a stand he may have I done just that. 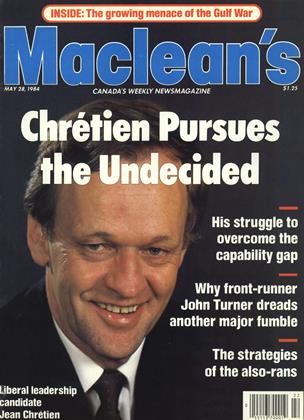