The witness was William Casey, controversial director of the U.S. Central Intelligence Agency. Participants described his exchanges with the Senate Intelligence Committee as “spirited” and “sharp.” Behind closed doors last week the Senate panel interrogated Washington’s spymaster on the Reagan administration’s covert war against Nicaragua’s Sandinista government. Specifically, the lawmakers wanted Casey’s assurance that—unlike earlier briefings on the agency’s role in mining Nicaraguan harbors—he would, in future, keep the supervisory committee fully informed. Then, Casey issued a formal apology and agreed to give advance notice of “significant anticipated intelligence activity.” As a result, the panel’s vice-chairman, Senator Daniel Moynihan (D-N.Y.), withdrew the resignation he had submitted to protest the CIA’s failure to provide details of the mining operation. Said Senator Lloyd Bentser (D-Tex.): “I think it is time we had a ceasefire with the committee and the CIA.”

tinuing crisis over Central America. In The Hague lawyers for the Nicaraguan government appealed to the International Court of Justice to declare U.S. support for anti-Sandinista rebels— known as contras—illegal and to demand its suspension. Lawyers for the Reagan administration argued that the World Court has no jurisdiction to decide on the case. In Managua, Interior Minister Tomas Borge attacked the nation’s Roman Catholic bishops for suggesting that rebel forces be allowed to participate in peace talks. Said Borge: “This is a criminal suggestion. We will never negotiate with the contras.” And junta leader Daniel Ortega declared that the CIA had “thought up and shaped” a pastoral letter read by the bishops on Easter Sunday, calling for a dialogue with the rebels. Said Ortega: “We do not doubt that one of the bishops was briefed by the U.S. Embassy.” Meanwhile, Sandinista forces recaptured the remote coastal town of San Juan del Norte from one rebel group, the Revolutionary Democratic Alliance (ARDE). The group’s leader, the dissident Sandinista hero, Eden Pastora, said that ARDE was advancing on towns farther north and he said that he will

join the other major centre group, the Honduras-based Nicaraguan Democratic Force (FDN). The CIA supports a union of the two groups to help co-ordinate the insurgency movement.

In the Pacific Gulf of Fonseca, the U.S. Navy began week-long exercises aimed at intercepting suspected arms shipments from Nicaragua to El Salvador’s left-wing rebels. The manoeuvres paralleled a much larger naval operation in the Caribbean involving roughly 30,000 U.S. service personnel. The exercises are part of a steady buildup of U.S. military forces in the region, which many administration critics contend may eventually draw U.S. combat troops into the conflict. Said Senator Jeff Bingaman (D-N.M.): “The risk-taking has increased, and so have the chances of an incident that would be used to justify direct U.S. military involvement.”

A House-Senate committee was expected to decide this week on emergency aid levels to El Salvador. The Democrat-dominated House has approved $32.5 million, while the Republican-controlled Senate has voted $62.7 million, as well as another $21 million for the Nicaraguan contras. Any delay, the ad-

ministration argued last week, would invite a new guerrilla offensive in El Salvador. William Schneider Jr., undersecretary of state for security assistance, said such an attack might force the army to use up its supplies “to the point where it could not defend itself.”

The White House also fears the consequences of a cutoff of aid to the contras, now estimated to number about 15,000. During a recent visit to Washington, Cmdr. Adolfo Carlero, head of the FDN, warned that any suspension of assistance would be “worse than the Bay of Pigs.” That was a reference to the abortive CIA-backed 1961 invasion of Cuba. The contras—after nearly two years—have recently begun to cause noticeable damage to the Nicaraguan economy. An abrupt severing of their aid pipeline would be, from their perspective, especially ill-timed.

Last week’s developments took place against the backdrop of Washington’s steady military buildup. Beyond the naval armada the Pentagon has now built or substantially improved six airfields in Honduras, from which reconnaissance missions with American personnel fly regularly over El Salvador. The escalation achieves several objectives: tactical support for

El Salvador’s army and the contras, pressure on the Sandinista junta and circumvention of the congressional ceiling of 55 military advisers in El Salvador. Senior administration officials have repeatedly denied that they plan to send combat forces into the region. But, as observers noted last week, the Pentagon has established a framework for acting quickly “if it has to.” Rotating military exercises are now planned into 1989.

In the United States debate over Central American policy remains intense— fuelled both by the political opportunism of an election year and by revelations of the CIA’s supervision of the contra insurgency. But the argument largely concerns means, not ends: both Democrats and Republicans basically support the administration’s efforts to restore democracy in ' El Salvador and to persuade the Sandinistas to curb the export of left-wing revolution. But there is sharp and honest disagreement about how those goals can best be attained. The president’s critics contend that his approach gives far too much weight to military solutions and far too little to diplomatic efforts, ö such as those that the four-nation Contadora I group (Mexico, Venezuela la, Colombia and Panz ama) favors. Said Sol Li-

nowitz, who was former president Jimmy Carter’s Latin American envoy: “When it comes to peaceful solutions in Central America, Contadora—despite its limits—is the only game in town.” Even administration supporters have challenged the wisdom of the CIA’s relatively open war with Nicaragua. Said former CIA deputy director Bobby Inman: “If you cannot build a consensus that holds, the policy is in trouble.”

The administration openly supports the slow-moving Contadora process and it insists that three-quarters of all U.S. assistance to the region is economic. Still, without military aid, officials say, El Salvador’s army would likely fall to the rebels, and Managua would have little incentive to discuss regional peace terms. Declared Reagan: “Economic assistance, as much as people on Capitol Hill would like to think otherwise, will not overcome the threat.”

Both sides recognize that Central American policy is now hostage to U.S. political factors. The White House contends that El Salvador’s guerrillas may stage “an October surprise”—a fierce autumn offensive aimed at provoking Reagan and influencing the November election in favor of the Democrats. U.S. officials are already planting stories in the media about large increases in Cuban arms shipments to Nicaragua.

But the president’s aides are also considering ways to recapture the moral high ground after the damaging revelations about the CIA and the U.S. decision to reject the World Court’s jurisdiction to hear Nicaragua’s claim.

Still, there is general agreement that current policies are unlikely to produce a satisfactory resolution. Aid to El Salvador maintains the military status quo, but it is not sufficient to defeat the guerrillas. Aid to the contras enables them to maintain an economic and psychological offensive against Nicaragua, but it is unlikely the guerrillas can topple the junta. Said Henry Kissinger, chairman of the president’s National Bipartisan Commission on Central America: “The present process is so tentative and creates so many doubts that in 10 years or less we can arrive at precisely this point, where we will have to decide whether the only way we can save it is by American forces.”

But unless there is a startling deterioration in the situation, the Reagan administration is unlikely to consider intervention as a politically attractive option in advance of the November presidential election. Still, many analysts in Washington and Central America contend that government forces in El Salvador are losing their war of attrition against the guerrillas. As a result, they say U.S. troops could be sent into action soon after the November vote.

With Peter Lewis in The Hague. 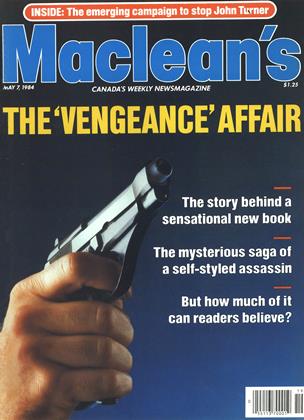