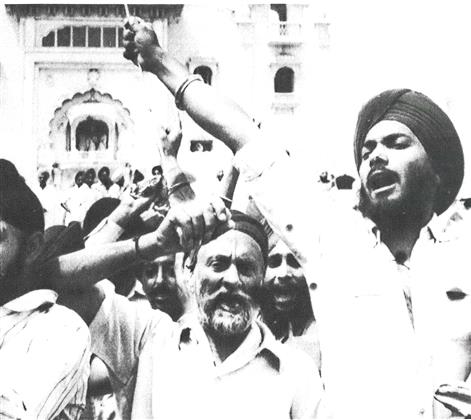 Sikhs demonstrating against Gandhi in New Delhi: advancing the radicals’ cause

It was a bloody climax to almost two years of armed struggle between Sikh extremists, fighting for greater political and religious autonomy, and the government of Prime Minister Indira Gandhi. As 450 Sikh militants in the Punjab region of northwest India last week barricaded themselves in the Golden Temple, the religious centre in the holy city of Amritsar, crack government troops ringed the 72-acre complex, demanding that the rebels surrender. But the extremists—led by the fanatical fundamentalist Sant (holy man) Jarnail Singh Bhindranwale—refused, exchanging gunfire with the troops. As a result, the troops stormed the temple complex in a hail of mortar, missile and machine-gun fire. When the rebels waved improvised white flags in surrender five hours later, as many as 500 people had died in hand-to-hand combat, among them Bhindranwale. An official announcement said he had died with one of the last groups to hold out in the Akal Takht, the seat of the high priests.

Gandhi swiftly praised “the exemplary courage” of her troops. The prime minister said she was grieved at the loss of life, but added that no government could tolerate the massacre of innocent people by extremists. Indeed, more than 300 Sikhs and Hindus have died in the past six months of violence. For their part, India’s opposition parties mixed criticism with guarded praise.“ The army had to go in,” declared Krishan Lal Sherma, secretary of the right-wing Bharatiya Janata party. “Gandhi should explain to the nation why it was not done earlier.” But at week’s end, political commentators in New Delhi predicted that Gandhi’s tough action would prove popular among India’s 577 million Hindus, who had been outraged by Sikh attacks against their coreligionists in the Punjab.

At the same time, Gandhi’s home minister, W.K. Wali, insisted that the troops had been careful not to damage the Amritsar temple’s inner sanctum, the golddomed, venerated Harmandir Sahib, where many of the rebels had barricaded themselves.

But some New Delhi observers suggested that the temple complex’s desecration would ensure that Sikh passions remain inflamed, threatening the nation’s unity. Indeed, as word spread of the temple assault, furious militants clashed with troops across India. In all, another 20 civilians and soldiers died in army mopping-up operations against extremists elsewhere in the Punjab. And Sikh anger spread beyond India’s borders. At the height of last week’s Golden Temple siege, 250 Sikhs jammed the Indian consulate in Vancouver, preventing the staff from entering. In Toronto a Sikh protester rampaged through the Indian consulate, smashing the furniture. And in New York, Tejindar Singh Kahlon, president of the local Sikh Cultural Society, declared that Gandhi “is laying the foundation for a separate Sikh state.”

One frequent criticism of Gandhi’s handling of the 22-month crisis was directed at her apparent reluctance to come to terms with the moderate Sikh party, the Akali Dal, over demands for greater Sikh autonomy in the Punjab, their home state. Gandhi maintained that her government had accepted all the Akali Dal’s religious demands and that it was prepared to negotiate a political solution. But her opponents charged that she had let the talks drag on in order to weaken the Akali Dal and strengthen the position of her Congress (I) Party in the Punjab. She may have succeeded, critics said, but at the price of driving Sikh moderates into Bhindranwale’s extremist camp.

Last week some observers in New Delhi predicted that what Sikh extremists were already describing as the 38-yearold Bhindranwale’s “martyrdom” might advance the militants’ cause. Certainly, he had presented his coreligionists with a compelling image as a zealot and he was frequently compared to Iran’s Ayatollah Ruhollah Khomeini. Inside the Golden Temple he challenged Gandhi to order an attack on the shrine, calculating that the prime minister would hesitate to do so because 17 per cent of the Indian army’s forces are Sikhs. But he also promised a bloodbath if she did. Only days before his death he said, “We may be killed, but a Sikh never weeps.” Observers now suggest that unless Gandhi quickly reopens talks with moderate Sikhs, the battle of the Golden Temple will likely prove to be only one episode in a long war of Sikh independence.

-with Eric Silver in New Delhi.