The tea shop, rechristened The White House, gleams under a fresh coat of shamrock green paint. At O’Farrell’s pub one lounge boasts a new name, The Ronald Reagan. Upstairs a hastily installed gift shop offers, along with china leprechauns and shillelaghs, $1 packets of local souvenir mud. In fact, it is the mud that has provoked the frenzied painting, treeplanting and primping currently occupying the Town of the Little Potatoes, better known as Ballyporeen, County Tipperary. Indeed, the fact that Ballyporeen’s most famous great-grandson, President Ronald Reagan, will arrive to survey his ancestral village late this week promises the soporific hamlet, 50 km north of Cork, more than the only two hours and 15 minutes in the sun while Reagan’s visit lasts.

At the same time, as the population of 350 braced itself for the arrival of 1,200 journalists, 1,000 security officers and a presidential entourage, which includes First Lady Nancy Reagan’s hairdresser and an air force colonel with the black box—which contains the controls to the United States’ military arsenal and accompanies the president on foreign trips—handcuffed to his wrist, Ballyporeen may also become a storm centre of a national controversy over Reagan’s four-day visit to Ireland. So concerned was Prime Minister Garrett FitzGerald that earlier this month he pleaded with the growing number of protesters against the visit to avoid what he called “counterproductive demonstrations.” FitzGerald clearly was concerned that

insulting Reagan might threaten some of the 37,000 jobs that 350 U.S. companies now provide in the economically beleaguered republic. The criticisms of the president’s visit range from the legitimacy of his ancestral claims to his Central American policies.

Foreign journalists unkindly depicted Ballyporeen as a charmless, onestreet backwater, where a visitor would stop only if he ran out of gas. But, as one of their number pointed out, that was hardly just: Ballyporeen has two

streets. Then critics said that Reagan could not claim any surviving relatives in the village and that the church register, which records the baptism of greatgrandfather Michael, son of Thomas

reads suspiciously as if the name were Thomas Ryan.

In County Mayo the president’s advance party ordered a giant 28inch-high bed in the Ashford Castle Hotel, where he will stay, to be lowered by four inches.

Hotel officials declined to say whether the president’s aides were concerned that he would have difficulty getting into the bed or that he might fall out of it. The opposition took on a still tougher tone when Dublin’s writer-broadcaster Eamonn McCann sug-

gested that Reagan’s only interest in Ireland was the 38 million Irish-American voters back home. Said McCann: “The Irish people are being used as a bunch of sentimental leprechauns for U.S. electoral purposes.”

But the most strident criticism was directed at U.S. policies in Central America, which have angered the Roman Catholic Church and numerous politicians, including some members of the governing Fine Gael party. Bishop Eamonn Casey of Galway, who contends that he saw soldiers kill 60 mourners at the funeral of Archbishop Oscar Romero in San Salvador in March, 1980, said he would not meet Reagan when he visits the National University of Ireland at Galway.

Two of the country’s three principal teachers’ unions have also denounced the visit, along with the Irish Federation of University Teachers. Two scholars have returned honorary degrees from the NUI to protest the fact that it will confer an honorary degree on Reagan. One of the two, Aodogan O’Rahilly, called on his peers to burn their degrees during the ceremony. Said O’Rahilly, who already describes himself as an exdoctor of law: “I do not wish to share anything with him.”

Among the protest groups that plan to picket the president at every stop is one called the Reagan Reception Committee. Another, Rock Against Reagan, plans to register its feelings using embarrassment as a weapon: the climax of a planned rock concert will be a screening of Bedtime for Bonzo, in which Reagan costarred with a chimpanzee. At the same time, a women’s peace camp pitched tents in Dublin. And the Committee for Nuclear Disarmanent plans to push a 10-foot Pershing missile replica-stamped Return To Sender—on a baby carriage along the presidential route from County Donegal to Ballyporeen. In response, Reagan

charm during last week’s televised presidential press conference. Dismissing the opposition, he declared: “That’s just Irish hospitality. They know I haven’t been any place in years where there hasn’t been a demonstration and they didn’t want me to feel as if I’m not at home.” But he may be less sanguine when he looks at Ballyporeen’s guest book and finds one signature written by a prankster, z It reads: “Fritz Mondale, § the White House, 1985.” z -MARCI MCDONALD S; in Paris. 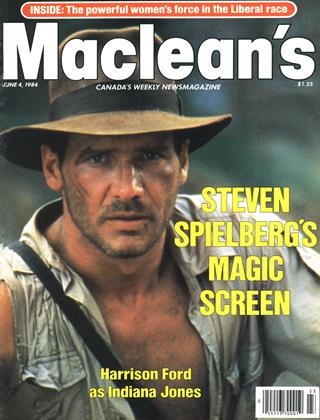