In late June The Globe and Mail carried a front-page story that said the federal department of finance was studying the idea of a “flat rate” income tax. It is an idea that members of our country’s intelligentsia have judged to be unworkable because they insist it would shift the tax burden from the rich to the poor. Well, according to my government sources there is no such study. The department of finance says simply that it “monitors discussions that are going on everywhere.” That means they read the newspapers.

That typically Canadian attitude of not even wanting to explore and discuss an idea—an attitude that we find not only in the corridors of government but in the hallowed halls of academe and in the newsrooms across the country—is dumb. It is dumb because it keeps us ignorant. In rapidly changing times the ability to adapt is what differentiates the winners from the losers. And the ability to adapt to change depends ultimately on knowing what the options are and how to choose among them. Without such knowledge actions become defensive, often leading to frustration, inaction or chaos.

While there is a widespread perception that our current tax system is not working well, it remains difficult to initiate an intelligent discussion about tax reform. Not only is our current system not bringing in the revenue that governments feel duty-bound to spend—witness the $30-billion federal budgetary deficit and the $20-billion combined provincial budgetary deficits—but Canadian taxpayers so widely perceive that the system is unfair that they have taken the particularly un-Canadian step of publicly condemning Revenue Canada.

The perception that the tax system is not doing what the government originally designed it to do—collect money from the citizenry for government to do what the citizenry cannot do — or the perception that it is unfair —that it no longer redistributes income to the poor from the rich—is not one that is uniquely Canadian. The United States’ Internal Revenue Service has acknowledged that a similar perception among Americans has resulted in the “disappearance” of $100 billion in tax revenues which should have been collected last year but which has apparently been diverted to the underground economy.

U.S. tax officials are fully aware that if they could once again bring that tax revenue into the formal economy, they could eliminate their federal deficit, conservatively estimated at $180 billion, within two years. It is precisely for that reason that the Congressional Budget Office and the treasury office of tax analysis have been working for years on a variety of alternative tax systems designed to appear more equitable and to bring more revenue into government coffers.

We must understand once and for all that the basic concept of the same flat tax rate for everyone is a nonstarter. The fundamental idea of taxing everyone at one rate, and allowing no deductions, exemptions or special credits, would indeed, as all the critics are so fond of telling us, shift the tax burden to the poor. Joseph Minarik of the Congressional Budget Office estimates that such a system would increase taxes for

Let us not assume that any politician —even a Canadian politician—is dumb enough to propose that. But let us also not throw out the flat tax idea while we continue to pretend that what we have now is progressive and, in fact, shifts the tax burden to the rich from the poor. Who do we really think uses the numerous tax loopholes such as the new, improved $15,500-a-year registered retirement savings plan deduction, the oil-and-gas-development deduction and the film-development deduction? Let us not be naïve.

The Congressional Budget Office has designed several dozen modified flat tax proposals that could collect as much or more revenue at lower tax rates than the current system while at the same time actually being more equitable. One of the options, the Bradley-Gephardt plan that actually made it to Congress, suggests a 14-per-cent tax bracket with personal exemptions for low-income earners.

That would be similar to the current tax distribution up to about the $40,000a-year income level. In other words, 75 per cent of American taxpayers would have a flat tax rate of 14 per cent, and none of them would pay more taxes than they do now. Above that level there would be perhaps three additional tax brackets, with a top tax rate of 30 per cent. That proposal would bring in sufficient revenue to eliminate the U.S. budgetary deficit within three years.

For its part, the U.S. treasury office of tax analysis is putting the finishing touches on a value-added tax. A VAT, as it exists throughout the European Community, is an indirect tax, similar to a sales tax, that governments levy on the contribution that each link in the production/distribution process adds to a product. Everyone in that process, from the original manufacturer to the retailer through to the consumer, must pay a VAT.

The entire burden of the tax shifts to the consumer, who pays the tax as part of the price of the product. The VAT is regressive because a poor person pays the same as a wealthy one. But it raises a lot of revenue. Canada, the United States, Australia and Japan are the only major countries in the non-Communist industrial world without a value-added tax. The United States is studying other options as well. One is expenditure taxes to offset income taxes. Instead of taxing money that people earn, governments would tax it as people spend it.

Americans are anxious to reform their tax system for many reasons, the first among them being the federal government’s need for more revenue. The Reagan administration is committed to indexing the income tax system to inflation in 1985. That will reduce revenue even if the inflation rate is low. Inflation and the progressive tax system have had, and will continue to have, a devastating effect on investment income. What is more, the deficit is not going to go away until tax reform brings the underground economy, and the revenue diverted to it, back into the system.

Americans understand the need for public discussion. They have investigated the options and are waiting until after this fall’s election to choose among them. Here at home, it would be a shame if the advocates of simplicity, efficiency and fairness failed to improve the tax system because they did not try. 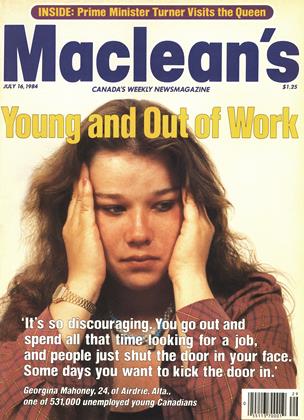