As representatives of 11 Latin American debtor nations gathered at the Colombian resort city of Cartagena last week to discuss their enormous $315-billion (U.S.) debt burden, some Western governments and bankers were openly concerned about being left in the lurch. But when the two-day conference ended Friday night, the concern faded because the debtor nations stopped short of forming a cartel or calling for a moratorium on their obligations. Instead, the conference took a moderate line, agreeing to set up a series of follow-up regional meetings to monitor the debt problem. Said Colombian finance minister Edgar Gutierrez: “Bankers and creditor nations should be pleased with the results of the meeting.”

Beyond that, the anticipated demands for radical action from the 11 nations turned into a plea for relief. In their final communiqué, they called for increased lending from the World Bank, an end to growing trade protectionism by wealthy nations and a recognition by the West that it, too, is responsible for the debt crisis. As well, the Latin debtors indicated that they will reform their economies to help repay what they owe, provided that the wealthy nations ease the sometimes restrictive terms.

Discreet observers from Western banks and governments stayed away from the conferBetancur: the ence site, confining

themselves to the resort’s hotel. But they were indirectly responsible for steering the conference on a path of conciliation rather than confrontation, as advocated in the fiery anti-West rhetoric of the host, Colombian President Belisario Betancur. The bankers and industrialized nations made their move long before the conference began when they adopted a divide-and-rule approach. As Latin anger mounted over steadily rising U.S. interest rates, the Western power brokers softened repayment terms for Peru, which had followed harsh International Monetary Fund (IMF) remedies for its economy to the letter. They also promised similar

rewards for belt-tightening to Mexico, which owes $90 billion, and Brazil.

The final communiqué from the meeting of 11 provided few specifics about two major topics: an upper limit on interest rates and the possibility of linking repayment terms to a debtor nation’s economic strength. It took note of the fact that some countries, especially Bolivia and Chile, want to use only a proportion of their hard-currency earnings from exports to repay interest. But

the final statement failed to spell out any definite plan.

There was, however, one ominous note for Western bankers. Argentina—currently in the midst of a deepening clash with its creditors and the IMF—will host the next debtors’ summit in September. As hosts, the nonconciliatory Argentines will set the meeting’s agenda and control much of its direction, a prospect that brought little cheer to the foreign bankers. Two weeks ago Argentina, with a total debt load of $44 billion, stunned a team of IMF negotiators in Buenos Aires by rejecting their proposals for an austerity program that Argentina judged to be so rigid as to create

That action was a break in the pattern followed by other Latin debtors, of giving into IMF programs as a precondition for new loans. As well, the timing of the Argentine move made it highly unlikely that Buenos Aires can reach any accord on paying or postponing $350 million in interest that it owes at the end of June. Failure to pay could force several major Canadian and U.S. banks to reclassify overdue Argentine loans as “nonper-

forming”—a move that could dramatically lower their profits.

For now, the Latin American debtors allayed Western fears that they might form a cartel. But that prospect may resurface when the Buenos Aires gathering convenes in the fall. Indeed, at roughly the same time that last week’s conference ended, 90,000 people gathered in the streets of Buenos Aires to protest IMF pressure. Warned an Argentine foreign ministry official, Oscar Romero: “Now we see the picture—we are not going to persuade the rich countries by playing softball.”

-RICHARD HOUSE in Cartagena, with Lenny Glynn in New York. 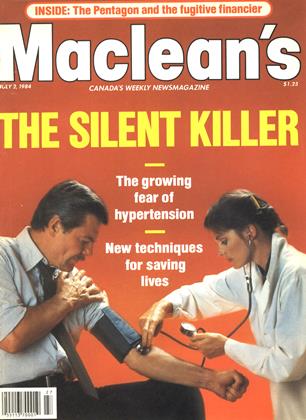