Even in its initial phase the election has taken on the aspect of an early Shakespeare play, with its two main actors revealing more and more about themselves and each other as the drama unfolds.

It’s one of those rare elections in which the campaign itself, instead of merely confirming a dominant trend, will determine the outcome. Election campaigns freeze the political landscape of a nation at a given moment in time; heritage fights impulse as the tug of the past competes with the pull of the future. What makes this contest so different—and so important—is that the Canadian economy is running out of options. We no longer have any margin for error in the conduct of our national affairs. Some fairly desperate alchemy is required, from either Brian Mulroney or John Turner, if the national patrimony is to be salvaged. The sad fact is that partisan wars, no matter how bravely fought, don’t resolve real problems. They only help to move us from a state of perplexity to a state of alarm.

What we deserve from our freshly minted leaders is not so much policy detail on how they intend to revive the economy as some flicker of insight which would assure us that they are able to tackle such a daunting assignment.

What has been happening in this country, without any politician apparently becoming aware of it, is that the notion on which nearly every previous electoral mandate since Confederation has been won—the promise to redistribute wealth, if elected—no longer applies. There is nothing left to redistribute. After two decades of Liberal rule (which followed six profligate years of spending under John Diefenbaker) the federal treasury is not just bare; it owes $180 billion. Ottawa has had only three budgetary surpluses in 30 years.

Despite those awesome truths, the politicians keep pretending that nothing fundamental has changed, that capital formation will create new jobs, so that the way out of any future recession is to seed the economy with fancy new regional subsidies, writeoffs and tax incentives. What happens in real life is that any businessman worth his bottom line promptly uses the extra Ottawa funds to either pay off his debts or modernize his plant—creating few new jobs in the process. Back in C.D. Howe’s 1950s, the decade whose spirit Turner is attempting to resurrect, a debate raged

among Canadian economists about whether three-per-cent unemployment was a sustainable total. Four recessions in the past 30 years have each brought with them lengthening rosters of the permanently jobless, so that we have reached the absurd situation of politicians boasting that they might, just might, be able to reduce unemployment to 10 per cent. That issue and that issue alone is what this election is about.

It may be asking too much, but it seems to me that politicians have to

start thinking again; few new ideas have caused stress in their craniums since Maynard Keynes delivered his nostrums from his Cambridge pulpit half a century ago. The banana-peel pragmatism that passes for Canadian political ideology long ago exhausted its usefulness.

At another level, this election is about the re-establishment of the Liberals and Conservatives as national parties. No longer can we pretend that it’s even vaguely possible to govern this country

when the Liberals only have token representation in the West and the Conservatives retain a similar status in Quebec. The only way to prevent the special interests of one province or region from dominating Ottawa’s concerns is to return both parties to having truly national constituencies. This is the value of Turner seeking election in British Columbia and Mulroney going for his seat in Quebec. Both men are reaching out to repair the damage of their predecessors in hiving their parties very nearly into regional movements. Since neither leader is likely to be defeated on his chosen ground, the rejuvenation process of turning both the old-line parties back into national instruments will at least have been started.

The other, unspoken issue in this campaign is the future of Canadian democracy. There are fewer than 30 functioning democratic governments remaining in the world, with most nations, willingly or otherwise, having become one-party states. With the Liberals in power for all but seven of the past 50 years, we are approaching that stature ourselves.

Democracy requires alternation. Certainly, the Liberals under Turner would be different from the same party under Trudeau, just as the Trudeau government didn’t perpetuate all the priorities of the Pearson regime it succeeded. But there is more to it than change of leadership. Only the defeat of the Liberals would shatter the political-mandarinate juggernaut that has ruled Canada for most of the past half century. “If the trend is prolonged enough,” warned the late, great historian W.L. Morton about the Liberal hegemony, “its implication is dictatorship, even within a democratic society.”

Surveying the long number of Liberal hacks guaranteed lifetime sinecures gained at taxpayers’ expense, the only appropriate comment that comes to mind is the kinky reasoning offered by Grace Slick, lead singer with Jefferson Starship, at a San Francisco concert recently: “I can’t sing and throw up at the same time.” 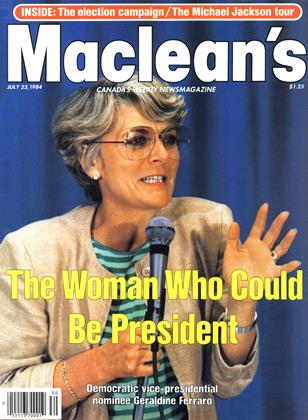