After any heavy summer rainfall curious tourists approach farmers in the St. John River Valley-New Brunswick’s potato belt—and ask why the picturesque river has turned chocolate brown. Local farmer Jacques Laforge, for one, tells them the color comes from precious topsoil that the rain has washed off the region’s farms and into the river. The 29-yearold farmer, who has battled soil erosion on his own farm for five years, decries the public’s ignorance about the enormity of the problem. Said Laforge: “They do not seem to realize that they are seeing their next 30 to 40 years food supply passing in front of them.” But Laforge had cause for comfort last week when, in an attempt to galvanize national interest in the growing soil crisis, the Senate’s standing committee on agriculture, fisheries and forestry released an uncharacteristically blunt report on the declining quality of Canadian soils.

one of several committee members who travelled across the country last week sounding the alarm: “The onset is slow and insidious, but the effects are devastating. I personally rank it ahead of acid rain as a national problem.”

rain water runoff has swept away as much as 18 tons of fertile soil per acre, in some areas exposing bare rock. Winds threaten to strip southern Quebec’s farmland of its productive soils within 20 years. On the prairies excessive cultivation and herbicides use have caused growing patches of salt, which have lowered crop productivity by as much as 75 per cent in some areas. And southwestern Ontario loses 30 to 40 per cent of its

potential corn yields every year because of wind and water soil erosion.

According to the Senate document a variety of factors has encouraged soil degradation in Canada. The short-term economic realities of farming—high interest rates and disasters like this season’s devasting drought in Western Canada—have forced financially burdened farmers to wring every dollar they can out of the land. As well, many agricultural practices—new and oldhave depleted the soil.

The Senate report singled out summerfallow (plowing unplanted fields under in the summer), monoculture (onecrop farming) and the use of heavy machinery as processes that can produce salt problems and wind erosion. In addition, many government policies, like the Canadian Wheat Board quota system, have encouraged soil-degrading farm practices by rewarding farmers financially for increased productivity. And some farmers have failed to recognize the declining fertility of their soil because they keep yields high by adding more fertilizer each spring.

Even when farmers recognize the danger, many are slow to act because cures can be time-consuming and expensive. Five years ago rainwater runoff created foot-deep gullies on Laforge’s

hilly farm, washing away soil, fertilizer and even crops. Sickened by the loss, Laforge contoured two-thirds of his land into 15-foot-wide terraces to hold the soil in place and built special waterways to control the water flow. To rebuild the nutrient-rich organic matter that had been lost in the soil, he started a more extensive program of crop rotation. The results have been dramatic. Compared to a neighbor whose eroded land now has only one to two inches of topsoil, Laforge has a foot to two feet. And his fields typically yield more potatoes per acre than conventional New Brunswick farms. But Laforge’s conservation program cost $24,000, and he said that without a special five-year federalprovincial grant, which paid half, and his dairy business, he would not have been able to make the changes. Still, he said that politicians are not doing enough. Said Laforge: “They spend millions for offshore drilling while our soils go down the drain.”

That is a charge that is echoed across the country. Critics assert that Ottawa does not have a co-ordinated national soil conservation policy and has committed only $8 million to arresting soil erosion over the next five years. In contrast, the U.S. Soil Conservation Service spends $640 million on the problem yearly. As a consequence, farmers across Canada have often embarked on their own soil conservation programs using U.S.-inspired techniques. In Deloraine, Man., 320 km southwest of Winnipeg, grain farmer William Bell ended the water and wind erosion that had ravaged his 1,920-acre farm for 40 years by turning to “no till,” or cultivationfree, farming. Since 1977 Bell has rarely plowed his land except to put in seed and keeps it continually planted. The major drawback to no-till farming is that it makes the farmer increasingly dependent on the use of more costly herbicides.

The Senate report calculates that it will take as many as 20 years to reverse the damage that soil degradation has already caused. But it also noted that nothing will be done until national leaders recognize the urgency of the problem. To that end, the Senate report recommends a massive education program, a national soil policy and increased research. Farmers would also like to see soil care become a major election issue. But they do not expect immediate action from politicians on an issue as unglamorous as soil conservation. Concluded skeptical Manitoba grain farmer Donald Alexander: “We are only four per cent of the population and can be easily ignored.” Still, because soil degradation will eventually mean higher food prices and lower-quality produce, many farmers hope that Canadian consumers will apply more persuasive pressure. 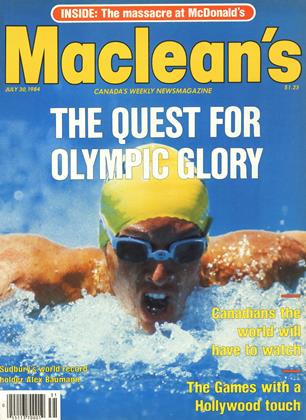