British writer Jane Austen once declared: “For what do we live, but to make sport for our neighbors?” Austen could have been writing about early summer in Great Britain, when royals and workers alike turn unabashedly to sport for relief. Starting with four days of pomp and horse racing at the Royal Ascot in Berkshire (June 19 to 22), the glittering celebrations continue with the fabled Henley-onThames regatta in Oxfordshire, move to the world-class test at the Lord’s cricket ground in London and then to the oldest golf tournament in the world, the British Open, July 19 to 22. But the jewel in Britain’s shimmering sporting summer is the All England Lawn Tennis and Croquet Club’s two-week tennis tournament in Wimbledon. Before it ends this weekend in fashionable southwest London, 50 hours of play will be beamed to more than 100 million American TV viewers, and every Canadian tennis fan will take Breakfast at Wimbledon in front of the television set.

Before the first serve at the 107th classic on grass, controversy overtook the usual stately decorum. Rules may be meant to be broken but not at Wimbledon, as two-time winner and top-seeded John McEnroe of New York City discovered when he arrived for his first-round match on Centre Court wearing blue tennis shorts. At tradition-bound Wimbledon, while a record crowd of 32,628 buzzed, the man whom the British press dubbed “Superbrat” complied with an order to change into whites and came back to defeat Australian Paul McNamee.

In the Technicolor world of modern professional sport, Wimbledon is a remarkable spectacle to behold. The club even upholds a ban against the DayGlo yellow balls that most players use on courts around the world. And the white balls are subjected to a quality test: officials drop them from a height of 100 inches and discard them unless they bounce at least 55 inches.

That attention to detail has made Wimbledon the one tournament in the world that every player dreams of winning. After American Chris Evert, a three-time Wimbledon winner, played her first match on the prestigious Centre Court, she referred to it as “a shrine.” U.S. television commentator Bud Collins calls it the “Vatican of tennis.” Indeed, when the vast elliptical

building now covered with Virginia creeper was built in 1922 it was completed with reverence. The architect, Capt. Stanley Peach, ensured that the fabled Centre Court would not be cursed by shadow before 6 p.m. and also that from any seat in the house spectators could see the ball, a white, penny-sized dot, anywhere on the court.

A crew of 10 groundskeepers, working yearround, maintains the grass in immaculate condition for the annual fortnight of competition.

For decades players considered Wimbledon’s courts the best in the world. During the 1970s, however, there was increasing criticism that the surface was too soft and offered too many uneven bounces. In 1982 Wimbledon hired a new head groundskeeper, Jim Thorn, from St. George’s Hill tennis club in Weybridge, Surrey. There has been nothing but praise for the courts ever since.

They are fast enough to suit a serve and volley specialist who rushes the net, and yet they provide enough bounce for players who opt to rally from the baselines. Said Billie Jean King, the winner of a record 20 Wimbledon titles: “They are not like they were in the 60s—hard as concrete.

The courts are a lot faster than they have been, but they are true, too.”

The secret was in the planting: a hardier breed of grass, dwarf rye, that recovers well and stands up to daily pounding from the aggressive competitors. U.S. television producers would like the All England to dye the courts a lush green, but traditionalist Thorn is adamantly opposed. “If they were very, very green, I would be worried sick about it,” he said. “I want them a yellowy-green. That way they are going to be foot-sure. A dark green would be lovely for television, but no good for tennis.”

Although the tournament’s tradition lingers, Wimbledon has had to change in

recent years. To accommodate the crowds, the All England has increased the number of courts to 18 and added extra seating. Indeed, following McEnroe’s histrionics last year Wimbledon organizers now buy $176,000 worth of insurance to protect the club against possible lawsuits in the event that they

eject a troublesome top-seeded player. The prize money also has increased to $2.5 million this year from $1.6 million in 1983. And international interest in the event has skyrocketed, mainly because of television coverage.

Tickets to the event are still difficult to obtain, unless the fan happens to be a member of the prestigious All England club, a visiting head of state or a topseeded celebrity. The masses, however, must try to win their tickets by lottery. Every year thousands of Britons mail their names and money in hopes of getting one of the day tickets that sell for

$28 for Centre Court. Prior to the lottery system, thousands of avid fans brought sleeping bags, camping stoves and coolers of champagne, sometimes waiting as long as a week in the famous “Wimbledon queue” to buy their tickets for the tennis tournament, perhaps even for the finals. Some received mail addressed to them care of “The Overnight Queue, Church Road, Wimbledon.” Yet even the famed queue has succumbed to modernization.

As well, Wimbledon is no longer the elite social event it used to be. Professionalism and commercialism in tennis

have made it more democratic and accessible to all levels of society. Although vendors still sell the traditional strawberries and cream on the grounds, they have been overtaken by the Coney Island smell of onions and hotdogs on the griddle. Except for members of the Royal Family, who sit in the royal box at one end of Centre Court, women no longer wear fancy hats and flowery dresses. Men have forgone coats and ties for open sports shirts. Said Buzzer Hadingham, the Wimbledon chairman: “Wimbledon has changed quite a bit in the past 25 years from the time when it was very

much a garden-party atmosphere. People used to dress up far more than they do now. Then it was a marvellous social occasion—very much like the Lord’s tests, Henley and Ascot.”

For the players, however, Wimbledon has remained a quaint throwback to a time when the male players wore long pants and the females sported long skirts and hats. As a reminder of the tournament’s history, each year organizers give participants round paperdisc badges and a two-week supply of “high tea” tickets. Yet there are frustrations. Players complain that it is almost

as difficult to book practice courts as it is for fans to get Centre Court tickets. And, said McEnroe, officials conduct themselves with such detachment that players feel “they don’t really want you or treat you with respect.” Despite the ironic source of the criticism, this year tournament organizers have vowed to treat the players better. Said Hadingham: “It was about time we realized the players brought in the money and that we had to be less aloof from them. We’re working on this: we want to know what they want.”

sett, 16, the first Canadian to be seeded at Wimbledon, a place in this week’s final would have been enough. After winning her first two singles matches and a doubles match, Bassett, seeded 16th, was upset Friday by unseeded Anne Hobbs of England. Had Bassett won, she would have faced Martina Navratilova, who dominates her game like no other competitor in any sport. Navratilova won the singles title at Wimbledon, the U.S. Open and the Australian Open in 1983, and the French Open last month—the Grand Slam of tennis. With partner Pam Shriver, she also took the

doubles championship at all four events. As Navratilova said after the French Open, “I have transcended another level.”

So have Britain’s sporting weeks of summer. No sooner will the Duke and Duchess of Kent crown the 1984 Wimbledon kings and queens than Britons will turn their attention to the hallowed birthplace of golf, the Royal and Ancient Golf Club of St. Andrews at Fife, Scotland. There, speaking in hushed tones is also an absolute must, but colored golf balls are in. 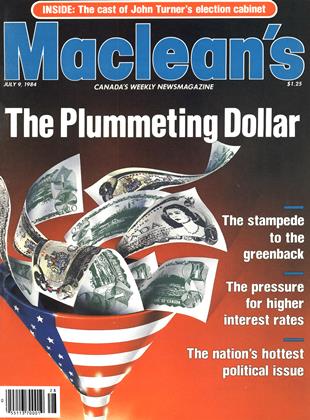