'Veronica Geng, whose satire has enlivened the pages of The New Yorker and The New York Review of Books regularly since the late 1970s, now appears in a party pack. A little of her sophisticated humor travels well and far, but more Geng travels even farther. Unlike many humor anthologies, Geng’s first, Partners, easily carries a reader from piece to piece and then back again for seconds. Her strategy is to combine unlikely elements—she reviews the Watergate tapes as if she were writing a record column, with President Richard Nixon’s signature tune, This Thing Burns My Tail, on the album Bad Rap. But the real subject of Geng’s satire is not people but language.

With a disarming blend of silliness and intellectual one-upmanship, Geng demonstrates that English comes in a dozen corrupt dialects. She singles out the say-nothing school of the “Dress for Success” books—“Every single business, no matter how similar, is different”;—and the cryptic social comment of The New York Times wedding announcement page: “The parents of the bride, Dr. and Mrs. Morris Plains Burdette of New York, are partners in Conspicuous Conception, an art gallery and maternity-wear cartel.”

Equipped with a large pair of scissors and a healthy sense of the absurd, Geng reads everything—instruction pamphlets for appliances, “brainteaser” books, 19th-century philosophers,

avant-garde film critics and Jimmy Breslin’s syndicated, tough-guy columns. She clips, she files and, like a jazz musician who finds the hidden heart of a song, she plays with the theme. At the mere hint of a trend, Geng attacks. In Ten Movies That Take Women Seriously, she writes, “In cult film-maker David Cronenberg’s latest shocker, a successful, lonely career woman (Anne Bancroft) has an affair with a married man (Ronald Reagan), becomes pregnant and gives birth to millions of tiny weddingcake grooms that threaten to annihilate the greater Los Angeles area.” When the cow is sacred, she milks it for laughs. One of her more hilarious feats of mimicry is Buon Giorno, Big Shot, in which an irascible female journalist reminiscent of Italy’s tart-tempered Oriana Fallaci interviews her father: “Finally he was walking towards me, across the lobby of the Hotel Omnipotente, in Rome. God, the man is not good-looking!”

Her targets range from the barely visible, including a turgid, semeiological rewrite of a typical Newsweek story, “Five heartland families,” to the obvious-politicians, including, whenever possible, President Reagan. Political rhetoric is child’s play for Geng—a display of language so flamboyantly meaningless that Report from Your Congressman reads like the mutterings of a schizophrenic: “Amid some unemployment, from men to women, such problems are offset by a situation that is serious but not critical, yet nonetheless stops short of complete success.” A reader has only to refresh his memory of the recent John Turner-Brian Mulroney television debates to recognize that political speech is often not so much an act of communication as a verbal massage. What is said is less important than how it sounds. And as the speaker turns into a product, words naturally become commodities. By making her readers laugh at that appalling state of affairs, Geng makes language human again.

So much cleverness could be cloying, but Geng redresses that with refreshing lapses in taste. In My Mao, a parody of a mistress memoir, Chairman Mao’s fictitious lover reveals the leader’s sensitivity to “certain kinds of pressure. A few times he was moved to remind me, ‘Please, don’t squeeze the Chairman.’ ” She even parodies dictionaries of slang that list obscure colloquialisms for sexual acts. One Geng example: “Take a meeting—fly to California for the purpose of engaging in coitus.” In a book as skilfully written as Partners, it is nice to know that Geng can also be scrupulously vulgar when the occasion demands. 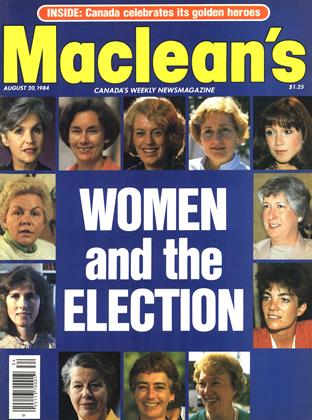