Under an unrelenting sunny sky in Saskatchewan last week, Frank Monette gazed over the ugly yellow-and-brown stubble that covered the fields of his 2,700-acre grain farm. Just a few weeks before harvest time Monette’s farm, 200 km southwest of Regina, was a grim testament to the severe drought that has settled over a large part of the Prairie provinces in the past several months. The 34-year-old father of three has seen his potential harvest slashed by at least one-third. And each day that the sun continues to beat down on his parched land adds to the $30,000 in projected income that he has already lost. With no prospect of rain in the long-term forecast, the situation is almost certain to deteriorate. Declared Monette: “If I cannot arrange a loan to cover next spring’s seeding costs, I’m out of business.”

Across southern Alberta, Saskatchewan and Manitoba, the bone-dry weather conditions have severely damaged the crops of thousands of farmers. In Lethbridge, Alta., scientists at the Agriculture Canada research station calculated that with rainfall at barely two-thirds of the average this year, growing conditions are the worst in 65 years. In Winnipeg two weeks ago the Canadian Wheat Board predicted that spring wheat yields will be down 60 per cent in Saskatchewan, 50 per cent in Alberta and 35 per cent in Manitoba. In many farming communities the problems created by

the drought have been aggravated by plagues of grasshoppers which thrive in dry, hot climates. “Here it looks like someone took a blowtorch to everything,” said Roland Henuset, a cattle farmer near Pipestone, Man., about 40 km from the Saskatchewan border. “It’s pretty grim.”

Saskatchewan’s 35,000 southern wheat farmers have been hurt most by the drought. Wheat Board analyst Susan Dunlop estimated that 50 per cent of Saskatchewan’s 16.4 million acres of hard, red spring wheat is under severe stress because of the lack of moisture, and the Saskatchewan Wheat Pool has estimated that the drought will cost southern grain producers at least $700 million this year. And despite a variety of financial aid programs offered by Ottawa and the three Prairie provinces, the drought is expected to lead to a rash of new bankruptcies among western farmers already squeezed by high interest rates and poor crop prices. Maurice Bertholet, for one, who farms 880 acres near Lauder, Man., is close to bankruptcy and fears that he may have to give up farming. For Bertholet, the grasshopper plague was one blow too many. Declared Bertholet: “It’s more than a problem, it’s a disaster. I have farmed this place for 21 years. I’m not a quitter, but there is a time when you have to quit.”

and Andrew Nikiforuk in Winnipeg. 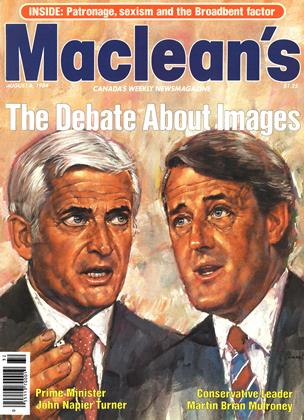