It happened at night and in the thick fog that plagues ship captains sailing the English Channel. On Aug. 25 the German passenger ferry Olau Britannia set sail from Flushing in the Netherlands to Sheerness in England, carrying 935 holiday-makers. Then, 10 miles west of the Belgian port of Ostend, the 4,200-ton French freighter Mont Louis loomed out of the mist. The two vessels collided, and, while the ferry escaped serious damage, the freighter keeled over and sank 46 feet to the Channel floor. What set the accident apart was the ship’s cargo—240 tons of deadly uranium hexafluoride, a highly corrosive compound used in refining uranium

for nuclear reactors. French environmental authorities then reported that three of the 30 barrels on the sunken vessel included highly radioactive material, including plutonium, tritium and strontium.

At first the ship’s owners sought anxiously to avoid a controversy. In a statement, the owners—the Paris-based Compagnie Générale Maritime (CGM), declared that salvage operations would begin immediately, adding that “eventual pollution would be negligible.” But as further details emerged, anger and confusion gathered strength on both sides of the busy Channel.

Salvage divers confirmed that the mildly radioactive cargo was safely stored inside its protective cylinders. And spokesmen for Smit Tak International, one of two salvage firms contracted to recover the cargo, said the

uranium hexafluoride—known as “hex” in the nuclear industry—could be recovered. But the incident sparked an international uproar over the shipping of nuclear material. The Mont Louis had been carrying its hazardous cargo from the French port of Le Havre to the Soviet Union, where it was to be reprocessed into enriched uranium and then returned to France for use in powergenerating nuclear reactors. Last week the Paris daily Le Monde reported that CGM initially listed the Mont Louis’cargo as “medical supplies.” For their part, French authorities explained their initial reluctance to confirm that the Mont Louis was carrying dangerous goods by

claiming that they wanted to avoid alarming the public.

British politicians and seamen’s union officials condemned the practice as unsafe and called for new international guidelines to cover the shipping of radioactive cargo. Said Jim Slater, head of the National Union of Seamen: “It is horrifying to think that cargoes of this sort can be transported through one of the world’s busiest stretches of water without other ships knowing the dangers involved.”

Some observers said that because uranium hexafluoride can be used in the production of atomic weapons, its shipment should be kept secret. Others say it is unlikely that terrorists would have the massive resources needed to build atomic weapons even if they did manage to hijack a ship laden with nuclear material. At the same time, they add, ura-

nium hexafluoride would have to undergo expensive reprocessing to concentrate its strength. To do so they would have to use reprocessing plants in the United States, Europe or the Soviet Union. And political experts doubt that Moscow would be willing to undertake the unpredictable adventure of supplying terrorists with enriched uranium. Besides, the uranium hexafluoride lost last week had been destined for eventual use in French reactors. The radioactive material originally was refined in France. The material was to be reprocessed into highly concentrated uranium-235 in the Soviet Union, which has developed a moneymaking business reprocessing nuclear fuels. Last week Britain’s Central Electricity Generating Board revealed that it sent 10 per cent of its uranium hexafluoride to the Soviet Union. And observers said that Western nations reprocessed strategic nuclear materials in the Soviet Union because of Moscow’s highly competitive pricing policies.

According to environmental spokesmen, the job of salvaging the Mont Louis’ cargo will be particularly difficult. Leaders of the environmental organization Greenpeace claimed that uranium hexafluoride is so extremely corrosive that if it comes in contact with seawater it could set off an explosion. Disputing the assurances of the ship’s owners and of French officials, Greenpeace spokesmen added that a chemical leak would endanger the lives of salvage operators and also severely contami-

Last week’s outcry called into question existing restrictions on the maritime shipment of nuclear waste, but a parallel controversy loomed over the proposed air shipment of more than 500 lb. of high-grade plutonium—enough fuel to build 10 nuclear bombs—from Japan to France for reprocessing. The plutonium eventually will be used in an experimental fast-breeder reactor near Tokyo. The Japanese now intend to ship the plutonium by sea, escorted by French and U.S. warships. Japan’s nuclear program calls for reprocessing an additional 3,622 tons of plutonium during the next nine years—mainly in Europe. But last week’s controversy seemed likely to make international approval of such risky expeditions a great deal more difficult to attain. JARED MITCHELL with Peter McGill. 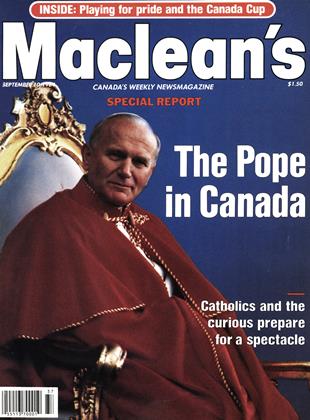