With the largest caucus in Canadian history to choose from, incoming prime minister Brian Mulroney will unveil a cabinet next week that contains some bright new faces, along with veterans from the Conservative front benches. Among the likely members of the new cabinet:

Erik Nielsen: An aggressively partisan and devoutly loyal Conservative, Nielsen, 60, has represented the Yukon in Parliament since 1957. During the Second World War he won the Distinguished Flying Cross. And the grim determination of those years has carried over into his subsequent career as a lawyer and a parliamentarian. Nielsen tends to dislike Liberals on principle—and he has zealously unearthed Liberal scandals and fought the party in Parliament for 27 years. In Joe Clark’s short-lived government of 1979, Nielsen served as public works minister. In the new cabinet, Nielsen will have a solid portfolio plus the sought-after role of deputy prime minister.

John Crosbie: A Newfoundlander with a quick temper, a barbed wit and a fast mind—and all three have caused him trouble during a 19-year political career. A lawyer who did postgraduate work at the London School of Economics, Crosbie, 53, began his political career as a city councillor in St. John’s, and from 1966 to 1968 he served as a Liberal minister in the provincial government until he clashed with then-Premier Joey Smallwood and crossed over to the Conservatives. An MP since 1976, Crosbie was finance minister in Joe Clark’s government—and it was a vote of confidence on his budget that year that brought down the government. Last year he trailed both Brian Mulroney and Joe Clark in the leadership contest. He will probably get the justice portfolio.

Gerald Merrithew: An amiable and industrious newcomer from Saint John, Merrithew, 52, is a veteran of New Brunswick politics. A former teacher and high school principal, he was first elected to the provincial legislature in 1972 and he held three cabinet portfolios under Premier Richard Hatfield. He also served as government house leader before deciding to run for a federal seat

in the 1984 election. He has a reputation for being an intelligent and likable politician and a careful administrator. With his extensive cabinet experience at the provincial level, Merrithew will probably get the problem-plagued fisheries portfolio.

Marcel Masse: A highly successful businessman, Masse was once the youngest cabinet minister in Quebec history as a member of Premier Daniel Johnson’s Union Nationale government during the late 1960s. Masse also acquired a reputation as an impressive and sophisticated administrator, a political moderate and an ardent Quebec nationalist. In 1971, after an unsuccessful bid for the Union Nationale party leadership, he turned to the federal Tories and ran unsuccessfully in 1974. When he finally won the Quebec riding of Frontenac in this month’s federal election, Masse, 48, was vicepresident of marketing and commercial development for the giant Montreal engineering firm of Lavalin. He will receive a senior economic portfolio—possibly as minister of regional economic expansion.

Robert de Cotret: De Cotret was the president of the Conference Board of Canada when Joe Clark lured him into politics as a star candidate in a 1978 Ottawa byelection. Although he lost his seat in the 1979 federal election,

Clark named him to the Senate and appointed him to the industry and economic development portfolios. In office, de Cotret was a skilled and thoughtful administrator. But his occasionally brash and arrogant manner made as many enemies as friends. He resigned from the Senate to run for a Quebec seat in the 1980 federal election but lost. He then joined the National Bank of Canada in Montreal as executive vice-president. De Cotret, 40, will have an economic post, possibly the industry portfolio.

Michael Wilson: A quiet and dignified Toronto investment counsellor, Wilson won on his first try for a parliamentary seat in 1979. Even though he was a rookie, Joe Clark made him minister of state for international trade. Wilson earned a reputation as a solid and intelligent—if uninspiring —performer. Conspicuously lacking in charisma, Wilson placed fourth in last year’s Conservative leadership contest. The 46-yearold MP will probably receive the coveted finance portfolio—a ministry where a sharp mind and steady nerves are needed.

Flora MacDonald: A fiery, reformminded Conservative, MacDonald was an administrative officer at Queen’s University when she decided to run for Parliament in 1972. A former secretary and a former executive director of the Conservative party, MacDonald easily won her Kingston seat. And by 1976—when she tried unsuccessfully for the party leadership—she had a reputation as a left-leaning fighter for social justice. MacDonald held external affairs in the 1979 Tory government and tangled with the federal bureaucracy when she tried to bring human rights practices into Canada’s relations with

other nations. MacDonald, 58, will probably be appointed to the explosive manpower and immigration portfolio.

Jake Epp: The soft-spoken Manitoba MP was a high school teacher when he first ran for the Commons in 1972 and won a seat. An affable and highly principled politician, Epp held the Indian affairs portfolio in Joe Clark’s government and he acquired a reputation for being a thoughtful and sensitive administrator and—as a Mennonite—a politician who rarely goes for the political jugular. Epp, 45, will probably receive the health and welfare portfolio.

Ramon Hnatyshyn: A respected Saskatoon lawyer, Hnatyshyn was first elected to the House of Commons in 1974, and he quickly acquired a reputation as a “nice guy” and as a meticulous and bright politician with a good grasp of detail. In 1979 Clark tossed him—unprepared—into the treacherous energy portfolio, and the gentlemanly Hnatyshyn was soon at sea in a federal-provincial quarrel over oil prices. Now, Hnatyshyn, 50, will probably receive the key post of government House leader—a role that better suits his orderly legal mind.

Don Mazankowski: A down-to-earth, no-nonsense MP, Mazankowski, 49, has represented the rural Alberta riding of Vegreville since 1968 and was one of the brightest stars in Clark’s government. As transport minister, he was decisive and well-informed, and he favored the idea of airline deregulation and improved railway transportation facilities for Prairie farmers. A onetime automobile dealer, Mazankowski wants transport again —and Mulroney will probably give it to him.

Joseph Clark: He is only 45, but the disappointment of defeat has given the former prime minister the dignity and gravity of an elder statesman. Only eight years ago the little-known Alberta back-bencher won the Tory leadership in an upset victory. He went on to form a minority government in 1979 which lasted only nine months. After waging a three-year battle to retain the party leadership, Clark lost it to Mulroney at last year’s party convention. A loyal Mulroney supporter since then, I Clark campaigned hard for the new prime minister and probase bly will be rewarded with the gcoveted external affairs portfolio.

Patricia Carney: The bright but low-profile Vancouver MP has been a solid performer for the Tories since she was first elected to the House in 1980. An economist and onetime member of the Economic Council of Canada, Carney, now 49, worked as a journalist in Vancouver and during the 1970s ran a consulting firm that specialized in social and economic problems in the Canadian Arctic. As a parliamentarian she is respected for her careful research and evenhanded approach to issues. She is not a colorful debater, but her quiet, reasoned arguments often put the Liberals on the defensive. She will likely receive the key energy portfolio. 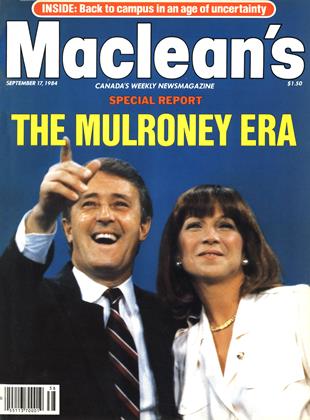