On the hustings this summer, Brian Mulroney more than once dodged questions about the economy on the grounds that he would first have to see the government’s books. Last week, in the hectic round of engagements that led up to this week’s swearing-in of his new Conservative government, Mulroney was briefed on Ottawa’s finances — and he acknowledged that the numbers contained some “unpleasant surprises.” Still, the troubled economic outlook did not seem to dampen the open and confident style of the incoming Prime Minister, who, in sharp contrast to John Turner’s low-key investiture just three months ago, gave the goahead for TV networks to broadcast the ceremonial swearing-in of himself and his outsized cabinet in the ballroom of Ottawa’s Rideau Hall. Mulroney took office facing a formidable array of national problems, but Norman Atkins, the architect of the Conservatives’ landslide victory, noted that he seemed to feel “totally in control of himself and his tasks. He is determined to explore a lot of avenues and get it right.”

Mulroney’s week—in the aftermath of his resounding electoral victory and on the brink of power—brought foretastes of most of the headaches that come with high office. For one thing, the Conservative leader faced the delicate task of selecting cabinet members from the swollen ranks of the 211-member Tory caucus. Mulroney informed his key choices—including financial experts Michael Wilson and Sinclair Stevens and former prime minister Joe Clark— that they would receive portfolios and should begin choosing their own staff's. It was a measure of the difficulty Mulroney faced in trying to put the best of his Tories into the right portfolios, while paying off political debts and keeping hurt feelings in his caucus to a minimum, that he wound up with one of the largest cabinets in Canadian history. But the size of the cabinet also reflected Mulroney’s intention of exercising tighter political control over the bureaucracy.

As part of the cabinet-building process, Mulroney, during a one-day visit to Quebec City, met with some of the cabinet prospects from his 58-member Quebec caucus to test their fluency in both of

Canada’s official languages. That careful attention to detail on Mulroney’s part helped to determine which Quebecers should be in cabinet—and reflected the care being taken by the Conservatives as they prepared for the influx of the party’s large and predominantly francophone Quebec caucus onto the Tory back benches (page 27).

Mulroney began his first full postelection week by meeting for 50 minutes with Turner in the Langevin Block across from Parliament Hill. Mulroney drank coffee and Turner sipped Perrier water as they discussed details of the changeover in a chat that aides later characterized as “friendly, relaxed and cordial.” During a press conference afterward, Mulroney indicated that Parliament will not meet until after Queen Elizabeth n completes a 14-day visit on Oct. 7. Moreover, sources close to Mulroney said that after enduring the rigors of the campaign and the first weeks in office, the new Prime Minister plans to take a vacation later in October —which suggested that Parliament is unlikely to be recalled before early November.

Availing himself of Turner’s courte-

&ous offer of a government Jetstar, Mulroney then flew on to Quebec City for a meeting with Gov. Gen. Jeanne Sauvé. When they emerged smiling from the Citadel, where Madame Sauvé was visiting, she told reporters that she had asked Mulroney to form a cabinet. And Mulroney, said the governor general in a joking reference to the Tories’ huge majority, “told me he would do what he could.”

Back in Ottawa, Mulroney had a round of briefings by senior civil servants designed to put him in touch with the inner workings of government. One long session was with Privy Council Clerk Gordon Osbaldeston, who explained the government’s decision-making structures and outlined how existing committee and departmental operations could be alteredemdash;and what the likely results would be. For his part, Mulroney grappled throughout the week with the choice of his own principal secretary and other key staffers for the Prime Minister’s Office. He offered the job of principal secretary to his former law partner, Bernard Roy, who served as Mulroney’s campaign chairman this summer. But Roy was not enthusiastic, and at week’s end Mulroney was still pondering the matter.

At the same time, Mulroney was putting together his cabinet in an elaborate ritual that was designed to keep reporters in the dark and protect the sensitivities of prospectiveemdash;and rejected emdash;ministers. Shortly after the election, Mulroney handed the RCMP a preliminary list of 50 possible cabinet ministers and asked for security checks to be run on them. Then, last week, Mulroney set up shop in a suite of rooms in Ottawa’s Chateau Laurier hotel while his aides began calling candidates to tell them that “Mr. Mulroney would like to see you and discuss matters with you.” On Wednesday Mulroney met with half a dozen cabinet hopefuls, and on Thursday he talked to 14 more. In each session he told the MP what portfolio he was being offered, and, if the offer was accepted, asked the minister-designate if there was anything in his or her background that could be a problem for the government. With the selection process completed, the new ministers began familiarizing themselves with their portfolios while Mulroney’s staff arranged a two-day program to prepare the MPS who remained outside of cabinet for their duties in Parliament.

One of the most sobering moments of the week for Mulroney came during a session with Deputy Finance Minister Marshall Cohen, who briefed him on the financial state of the nation. A Mulroney aide later claimed that the session “confirmed our worst suspicions,” and Mulroney acknowledged that “there are unpleasant surprises and they are going

to make the economic situation, and the way in which it is handled, all the more challenging.”

Indeed, the stark economic realities that Mulroney and his cabinet must now deal with could limit the new government’s ability to provide early fulfilment of some campaign pledges. According to calculations released by the

finance department two weeks ago, Canada’s federal deficit ballooned during the past fiscal year to $32.35 billion, up from $24.65 billion the year beforeemdash;and the Washington-based International Monetary Fund declared last week that both Canada and the United States must get their deficits under control or risk derailing the international economic recovery. As Bank of Montreal chairman William Mulholland observed in a speech last week to the Canadian Club of

Montreal, the new government may have no choice but to reduce spending on social programsemdash;and impose tax increasesemdash;in order to bring the towering deficit under control.

Political realities will require the new government to take early action to start providing Canada’s 495,000 unemployed young people with training and jobs, but economic circumstances may delay other policy thrustsemdash;such as the expansion of the armed forces and increased funding for research and development. Instead, Mulroney is likely soon to begin trying to rebuild the economy through retraining programs for the labor force, encouragement for the small business sector, a more relaxed climate for foreign investment and moves toward an industrial reorganization that would encourage the development of exportoriented industries.

The new government is also pinning its hopes on expansion of Canada’s international trade. “We have to go after new markets in the Asia-Pacific Rim, in the Caribbean, Latin American, Commonwealth and francophone countries,” noted Sinclair Stevens.

As a necessary condition for achieving his government’s goals, Mulroney had to ensure that Ottawa’s sprawling bureaucracyemdash;accustomed to a generation of virtually uninterrupted Liberal ruleemdash;was fully behind the new administration. Although no full-scale purge was planned, some Liberal appointees to Crown corporations and government boards and commissions, such as CBC president Pierre Juneau and Northern Pipeline commissioner Mitchell Sharp, were expected to retireemdash;or be fired or transferred. At the same time, some key civil servants were likely to be removed from their jobsemdash;gradually, and by a variety of methods. Mulroney’s aides were examining the possibilities of persuading some senior bureaucrats to take early retirement, rotating others into new assignments and perhaps encouraging an exchange program with the private sector to bring new blood into the public service.

The decision to avoid any wholesale firings was made for several reasons. Besides minimizing the need to hand over costly severance packages to highsalaried civil servants, the idea of a gradual shuffle in the public service suited Mulroney’s own conciliatory style. That style was reflected everywhere as the new Prime Minister prepared for and stepped into officeemdash;and not least of all in the inflated cabinet that will try to run the country. But as Mulroney begins his first 100 days in office, a troubled nation will also be looking for signs of boldness and decisiveness-qualities that will be essential as the Mulroney government tackles the vast array of problems before it. lt;£? 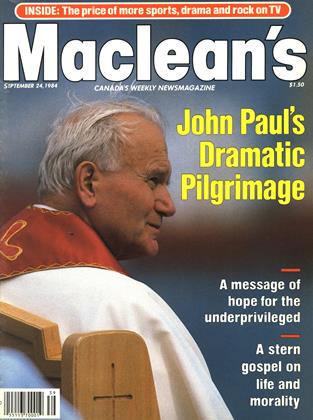