With a platform made up of three starkly simple planks —“sex, drugs and rock 'n' roll”— and additional promises to repeal the law of gravity and provide tax credits to Canadians for sleeping, the Parti Rhinoceros might expect to be roundly ignored by voters on Sept. 4. Yet the party stands a chance of equalling and even surpassing its showing in the 1980 federal election, when 121 candidates earned 123,000 votes—1.1 per cent of the total—and the party actually fin-

Founded by Quebec nationalists who wanted to satirize federal politics, the Rhinos are the least serious, but one of the most visible of the eight authorized fringe parties who managed to nominate the required 50 candidates, putting up a $200 deposit for each one. They include: the British Columbia-based, pro-environment Green Party of Canada, with 58 candidates in six provinces; the Confederation of Regions Western Party, which is running 55 candidates in the four western provinces and advocates separating Canada into four autonomous regions; the Communist Party of Canada, which has nominated 52; the little-known Libertarian Party of Canada, which fielded 72 candidates across the country; the Parti Nationa-

Bemused: Unlike most of the other fringe parties, which tend to bring a deadly seriousness to obscure or lost causes, the Rhinos—until recently, at least—were only interested in having fun. Their putative leader, Cornelius, is

a black rhinoceros now resident in the San Diego Zoo, having been born Dec. 10, 1979, at the zoo in Granby, Que., and the party has made the repatriation of Cornelius a cornerstone of its platform. In this election the Rhinos have fielded 89 candidates in six provinces, where bemused voters may find Rhino candidates campaigning with promises to finance free visits to bordellos, build a causeway linking Newfoundland with the mainland and offer a Senate seat to anyone for $15.

The party was the brainchild of Dr. Jacques Ferron, a novelist and humorist who was unhappy about the mailbox bombings and the threatening tone of antifederal protest in Quebec in the 1960s and founded the party to serve as a peaceful outlet for disgruntled Quebec-

ers. He chose the rhinoceros as the symbol, he explained, because “it is a slowwitted animal that can move as fast as hell when in danger. And it loves to wallow in the mud.”

Until 1979 the Rhinos were active only in Quebec and among francpphones. Charles McKenzie, a 40-year-old unemployed journalist and native of Vancouver, who is now the party’s national campaign director, became the first anglophone to join. He began to promote the party in other provinces. Today, party officials say that Rhino support out-

side Quebec is strongest in Ottawa, Peterborough, Ont., and Vancouver. “Anyone can be a candidate provided they don’t promulgate sexism, racism or violence,” says McKenzie.

Issues: But some observers believe that the Rhinos are not what they used to be, and indeed some of its members are espousing real issues. “They’ve lost their panache,” says Nick Auf der Maur, a Montreal city councillor who is running for the Conservatives in NotreDame-de-Grâce-Lachine East. For their part, the Rhinos have not overlooked the possibility that they might win a riding on Tuesday. If that happens, says McKenzie, the elected Rhino would take his seat in the House. “At $52,000 a year,” notes McKenzie, “we’d be nuts not to.” -BRUCE WALLACE in Montreal. 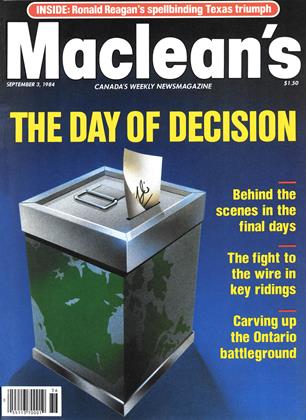