I’LL GET THERE SOMEHOW

Documentary film-maker John Zaritsky has a talent for shedding light on some of life’s darker concerns. In Just Another Missing Kid, the story of a young Ottawa boy who vanished while hitchhiking, he investigated the case with a thoroughness and sensitivity that won him an Academy Award in 1983. With III Get There Somehow Zaritsky turns his camera with disturbing effect on the widely misunderstood problem of arthritis. As the film points out, most people consider arthritis as mainly a disease of the aged. In fact, it afflicts 3.5 million Canadians of every age, crippling many with its inflammation and gradual destruction of the body’s joints. The disease comes in 115 different forms, from the garden variety osteoarthritis—which most Canadians can expect to get at some point in their lives—to the rare and often fatal lupus, which weakens connective tissues and major organs. With its revealing scope, I’ll Get There is the first documentary to bring the private pain of arthritis victims to public attention.

The film opens informatively, although rather clumsily, with a brief flurry of facts about the disease. Then Zaritsky moves swiftly to the real-life cases of four arthritis sufferers whom he has persuaded to dramatically recreate their struggles to cope with daily life. That technique poses some problems: Zaritsky’s subjects áre not profes-

sional actors, and they are often awkward before the camera. It is also difficult to portray past events convincingly when the individuals now look 10 or 15 years older. Despite those shortcomings, some of Zaritsky’s vignettes possess an odd poignancy: one 70-yearold woman, Betty Wheeler, seems to relive her anguish as she re-creates a disheartening conversation with her doctor about her deteriorating hip.

I’ll Get There sympathizes strongly with arthritis sufferers, but it looks at the medical profession with a highly objective eye. Gail Green, a North Bay, Ont., teenager, nearly suffered permanent disability when her family doctor wrongly diagnosed her stiffening joints as rheumatic fever. In fact, Gail had rheumatoid arthritis, one of the most serious forms of the disease. But on the whole the medical profession and various breakthroughs in treatment are portrayed positively and clearly.

Although I’ll Get There fails to touch on controversial remedies such as copper bracelets, bee stings and diet, such omissions are minor in light of its raw emotional strength. As Zaritsky’s camera frames the painful knock-kneed walk of 37-year-old Carolyn Thompson, her husband, John, speaks of her fortitude with a breaking voice: “I love her for that, what else can I say?” Thompson’s admiration could justly extend to all the people portrayed in III Get There Somehow: in the war against arthritis, the human spirit is still the chief combatant. 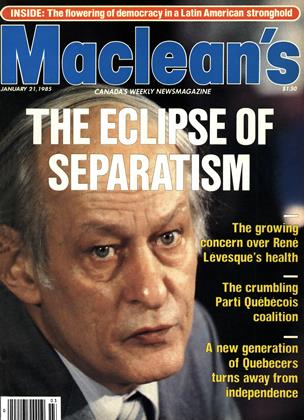