On the day that Donald Getty is sworn in as Alberta’s new premier, Ottawa is expected to propose a new pricing system for domestic natural gas. That announcement could have immediate political repercussions for Getty’s government. Ottawa favors price deregulation, and Ontario Energy Minister Vincent Kerrio has already warned that his province will not accept any deal that fails to reduce prices to consumers. But many western producers and politicians insist that in spite of Canada’s surplus of natural gas, lower prices could spell disaster for the country’s multibillion-dollar gas industry. Energy analysts predicted that the dispute could blow up into an argument reminiscent of the energy wars fought between Alberta and Ottawa in the 1970s—when Getty was Alberta’s energy minister.

Dispute: The gas pric; ing issue at its heart is a simple dispute over supply and demand. In essence, buyers in consuming provinces such as Ontario and Quebec argue that the current North American glut of natural gas should mean lower prices for residential and industrial users. But the producing provinces, led by Alberta, strongly oppose further cuts in domestic gas prices. At the same time, producers in Alberta, Saskatchewan and British Columbia—gas prices in those provinces are lower than Eastern ■ Canada’s—want the right I to export gas to the United States at low prices in order to compete in that market. If the National Energy Board approves

I the new export prices, some U.S. customers could end up paying less for Canadian gas than users in Central Canada.

Caught in the middle of the dispute is Pat Carney, energy, mines and resources minister under Prime Minister Brian

Mulroney, whose government is committed to deregulating natural gas prices. But before Carney can scrap the existing system of federally set prices, she must come up with an alternative that allows gas prices to reflect market conditions. So far, there is no consensus on how that goal can be accomplished.

To help her, Carney set up a task force of gas producers and distributors last

spring to recommend a deregulation plan. Its report, delivered to the minister earlier this month, recommended that Ottawa abandon the so-called “floor price” for gas exports, which prevents Canadian producers from selling gas in the United States for less than the price of Alberta gas delivered to Toronto. Until now, the West has complained about the floor price because it includes the cost of transporting the gas to Toronto, which adds about $1 to the current normal wholesale price of $3 per 1,000 cubic feet.

Conditions: But in return for that concession, Maclean ’s has learned, the producers would likely have to agree to several conditions. First, the

price of exports to any one U.S. region would not be allowed to undercut the rate charged in adjacent Canadian provinces. In addition, the producers would have to accept a slightly lower Toronto wholesale price and a less regulated environment for domestic gas sales.

Debates: So far, both Getty and Alberta Energy Minister John Zaozirny have been anxious to avoid angry public debates about gas pricing policies. Zaozirny told Maclean’s last week that all the parties involved in the talks “are sincerely working toward a resolution of the issue.” Still, the potential for political conflict is clear. In a speech to the Ontario Natural Gas Association last month, Ontario’s Kerrio made it clear

that Ontario is counting on lower natural gas prices to compensate for the higher oil prices contained in the Western Accord. Declared Kerrio: “We have to get our own market organized before we start giving away more non-renewable resources to foreign markets.” Those remarks prompted a swift and angry response from Alberta. Provincial New Democratic Party Leader Ray Martin declared: “It’s the same old argument. Ontario seems to have forgotten that the resource belongs to Alberta.” Added James Gray, executive vicepresident of Canadian Hunter Exploration Ltd. of Calgary, a major natural gas producer: “If Kerrio’s speech is indicative of his government’s attitudes, we are clearly in for a serious fight over our gas.”

-ROSS LAVER with MICHAEL ROSE in Ottawa, BARRY NELSON in Calgary and SANDY FIFE in Toronto 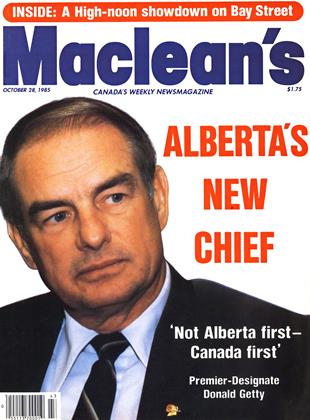