In 1897 Missouri-born Elmer Middlecoff arrived in the Yukon, one of 100,000 adventurers who went to the North during the Klondike gold rush. Now, his grandson Lowell Bleiler, 42, still mines the family claim on Highet Creek, washing tons of gold-bearing gravel called placer —pronounced “plasser,” a Spanish word meaning “a place where gold can be recovered from gravel”—through a 40-foot-long sluice box in which the precious metal, heavier than other minerals, settles to the bottom. But Bleiler and the 700 placer miners in the Yukon say that they are under siege. For one thing, environmentalists say that silt —an inevitable byproduct of sluicing —destroys the spawning grounds of salmon and Arctic grayling. As well, the miners say that inconsistent regulations undermine the industry’s stability. Declared Norman Ross, president of the Klondike Placer Miners’ Association: “Are we going to live under this system of conflicting federal acts that will never allow us to have any legal certainty and hamper the in-

dustry because we won’t be able to attract outside investment?”

Placer miners receive water-use licences from the nine-member Yukon Territory Water Board, established under the federal Northern Inland Waters Act of 1972. The board hears applications with “general regard” to

minimal guidelines adopted in 1976, which stipulate, among other things, that authorities may require operators to leave an uninterrupted stream flowing for fish passage and ensure that the fish are not trapped in the mining process. But the miners are also subject to Canada’s Fisheries Act, which prohibits the discharge of any substances

dangerous to fish habitats into waterways. As a result, three federal departments—fisheries and oceans, Indian and northern affairs and environment—jointly issued a set of proposed guidelines in February, 1983, which would take precedence and satisfy environmental concerns.

But miners quickly condemned the proposed regulations, claiming that they were too restrictive and that they would force as many as 85 per cent of the miners to close their operations. Among their complaints: all streams were to be placed into five separate classifications, but because the more than 80 salmon-spawning streams —classified as A creeks—were to remain free of any effluent, the guidelines effectively banned placer miners from expanding their operations into such areas. Indeed, after three weeks of public hearings in the Yukon in late 1983 resulted in 142 submissions —most of them opposing the guidelines—the government suggested an informal moratorium.

Since then the miners have maintained that the silt produced by their mining operations does not harm fish. But federal authorities say that, for one thing, a 1983 brief based on past studies done by the department of fisheries and oceans showed that when silt covers spawning areas it can pre-

vent fish roe from receiving enough oxygen. And Gordon Zealand, Yukon and northern B.C. district supervisor for fisheries and oceans, says that the heavily mined Klondike River now carries substantially lower numbers of spawning salmon. Still, officials say that they have been ignoring infringements by placer miners. Said Zealand: “The reason we are not shutting everybody down is because we feel there is a compromise somewhere there.”

Last year placer miners removed 94,000 ounces of gold, worth $30 million, from the Yukon’s streams, and this year’s production is expected to be even higher: up to 100,000 ounces. Indeed, Ross says that placer mining is now the Yukon’s second-largest industry after tourism, which in 1984 brought in $82 million. Federal officials say that placer mining is a mainstay of the Yukon economy, especially since the 1982 closure of Cyprus Anvil’s lead and zinc mine in Faro. Said Murray Morrison, northern affairs regional director-general for the department of Indian and northern affairs: “The hard-rock industry has suffered such a blow on the world metal markets that currently placer mining in the Yukon is responsible for 85 per cent of total metal production.”

Indeed, a government impact study showed that at least 16 per cent of

placer miners would be forced out of business if the 1983 guidelines were adopted. As a result, it established a research and development committee in May, 1984, to investigate environmental protection requirements and evaluate the economic viability of placer mining. Still, although mining industry representatives were included on the committee, in September the placer miners’ association withdrew. According to Ross, the committee was “completely unco-ordinated — studies for the sake of doing studies.”

But the association’s subsequent lobbying campaign—which has included letters to Morrison and David Crombie, minister of Indian and northern affairs—has led to little federal action. For one thing, officials say that further studies are necessary. Said Morrison: “We are moving toward a regulatory regime, but more work is required to develop regulations. The challenge for us all is to work together to find a regime that the placer mining industry can live with and at the same time protect the resource interests of other users.” First, though, the government must face the hurdle of getting the miners back to the bargaining table. 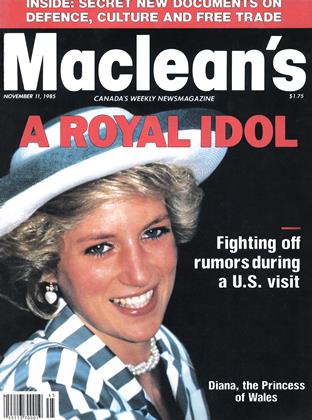