It resembled a scene from the popular television series Miami Vice. Shortly before 6 a.m. last May 24, heavily armed policemen raced to the Lady Shared, a 65-foot fishing boat moored at the Lockeport, N.S., wharf and seized 13 tons of hashish worth $238 million—the largest hashish sei-

zure in North American history. The RCMP owed their victory largely to Leonard Mitchell, a Lockeport businessman who had contacted them after the American drug smugglers had tried to involve him in the Canadian part of their operation. But while Mitchell remains in hiding under po-

lice protection, the scrap-metal business he ran with his wife Elaine’s twin brother, James Dooks, has closed. Indeed, for the Dooks family—innocent bystanders in the police drama—the raid was the beginning of a personal ordeal of shattered hopes and financial hardship.

In October, 1981, James Dooks, just retired as a master corporal after 16 years in the Armed Forces, was looking for a place to invest his life savings. He decided to buy a 49-per-cent share in the one-year-old company, Shelburne Scrap and Metal Ltd., that Mitchell had founded. The business prospered; by 1984 it was grossing $500,000 annually. But meanwhile, for 19 months, Mitchell was acting as an undercover drug agent. He revealed that fact to Dooks on the day of the raid before disappearing into police protection—leaving Dooks unable to draw on his financial resources.

Three days after the raid Sgt. Brent Crowhurst of the RCMP’s Halifax drug unit visited Dooks to reassure him that the company would be compensated for its founder’s departure. James MacDougall, Shelburne’s office manager, who listened to their conversation, recalled, “The impression he gave was that compensation would be forthcoming.” But instead, Dooks discovered that Mitchell had frozen Shelburne’s bank credit. He says that Mitchell was only following RCMP instructions, anticipating that the government would cover the company’s $30,000 overdraft. Indeed, Dooks said that several times over the summer Crowhurst told him to “wait one more month and we might have good news for you.” But without compensation he was unable either to pay off the outstanding bank overdraft himself or to secure new credit. On Oct. 4, after laying off his staff of four, Dooks tacked a sign to Shelburne’s front door: “Closed until further notice.”

The company now owes creditors more than $50,000. Dooks, who has found work in a bottle and metal depot, was unable to pay his mortgage and is selling his family bungalow. “I resent having to bear the brunt of the whole thing,” he said, adding that he was considering suing the RCMP.

For his part, Crowhurst insisted that any pledge of compensation was merely Dooks’s “perception.” He refused to comment further. As for the Mitchells, the only way they can be reached in hiding is through the RCMP. Meanwhile, Dooks’s wife, Carolyn, says that it will be a lean Christmas for their son, James, 12, and their daughter, Gayla, 17. She added, “I have no respect for the Mounties.” 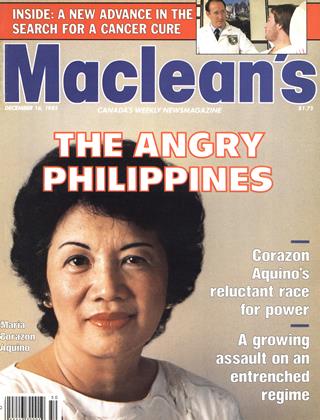