The teenagers in The Breakfast Club, who find themselves spending an entire Saturday of detention in their high school library, supposedly represent a cross-section of their age group. There is Bender (Judd Nelson), a lower-class kid with a big chip on his shoulder. He antagonizes everyone, particularly Claire (Molly Ringwald), a Jewish-American princess who brings sushi for her lunch. Andy (Emilio Estevez) is the sports fanatic, Brian (Anthony Michael Hall) the brain, and the weird one is Allison (Ally Sheedy), who hardly speaks to the others at all. As the detention hours wear on, the audience discovers why the five are there, what their families are like, who is and is not a virgin and what their feelings are about life in general. The Breakfast Club, a flattering portrait of adolescence, articulates those feelings astonishingly well—if sometimes at the expense of its own believability.

The teenagers use such words as “pristine” and “condescending”—a surprise to anyone who has heard about growing illiteracy in North American schools. They have the vocabulary of a screenwriter who is very fond of verbiage, director John Hughes. At times the jokes are snappy enough to override all objections, as when Bender asks the stuffy leisure-suited dean of students (Paul Gleason) who has detained them, “Does Barry Manilow know you raid his wardrobe?” And The Breakfast Club features young, genial actors who occasionally manage to create the illusion that they are real characters rather than mouthpieces for their generation. But for the most part, they speak the way an adult thinks teenagers speak.

Clearly, the film-makers strove to flatter the continent’s largest movie audience: teenagers. But as the five reveal themselves to one another their emotions are painfully slick and take on the unintentional comedy of a group therapy session seen by a cynical outsider. Nothing in The Breakfast Club— revelations of miserable home lives, the pressures of peers and parents, secret fantasies—comes as a surprise. Even the hijinks seem obligatory—including scenes in which Bender sets fire to his shoes. For the most part, the film is mildly enjoyable, as long as the viewer does not take it at face value for a single minute. But in the end the audience may feel that it, too, has been kept too long after school. —L. O’T. 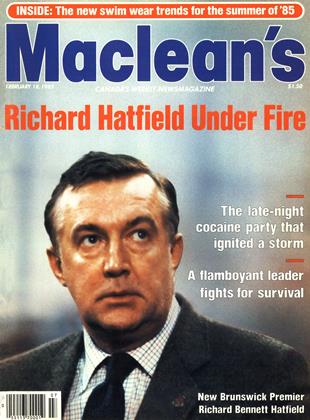