Under banks of television lights at the Regina Centre of the Arts, where CBC cameras captured every smile and nuance, last week’s live broadcast of the first ministers’ conference on the economy provided viewers weary from the federal-provincial wars with a display of political theatre designed to produce a happy ending. Prime Minister Brian Mulroney repeatedly reflected on the striking amiability of the meeting, telling Canada’s 10 premiers at one point, “People have taken a few potshots at us because we get along.” But the generally harmonious discussions—and the absence of the traditional closing communiqué—could not obscure two critical areas of disagreement-interest rates and free trade with the United States.

The pale ghost of the 1982 first ministers’ conference—where the premiers and Prime Minister Trudeau bickered continually—returned to haunt Mulroney last week when the premiers urged the federal government to work with the Bank of Canada to reduce interest rates, even at the cost of further depreciation in the value of the Canadian dollar. Otherwise, they warned, plans for economic renewal could be undercut

by rising interest rates. Momentarily caught off guard at this intrusion into a federal issue and at its awkward timing —during the third consecutive weekly increase in the Bank’s trend-setting rate—the Prime Minister replied that Governor Gerald Bouey must continue to have the authority to set monetary policy. Warned Manitoba’s NDP premier Howard Pawley: “This new government is not going to improve investment, jobs, or remove the regional economic disparities if we don’t ensure that decisions that are made by politicians are reflected in Bank of Canada policies.”

The question of comprehensive free trade with the United States revived traditional interprovincial divisions. The provinces with largely resourcebased economies, led by Alberta, favored free trade, while the manufacturing provinces, notably Ontario and Quebec, called for caution. Many jobs would be lost in Canadian factories, economists agree, if Canada removes its tariffs and other trade barriers in its commerce with the United States. “You can’t be swept away too quickly with the grand design,” cautioned Ontario Premier Frank Miller. “It always comes down to the individuals, the jobs.” At

the end of the conference a conciliatory Mulroney said that he would pursue free trade talks with U.S. President Ronald Reagan when they meet in Quebec City on March 17, but added, “We’re going to examine this very carefully.”

Still, general agreement on many issues, including job creation and regional development, gave the conference the chummy air of a social club. When the Prime Minister announced a $695-million job training program, the premiers took an hour to congratulate him, even though the former Liberal government had previously allocated the funds.

The conference, however, skirted controversial subjects, including federalprovincial transfer payments that will be negotiated in later meetings. Details on the job creation scheme also remain to be fixed. Noted Liberal observer and finance critic Donald Johnston: “I only hope that Pierre Trudeau isn’t watching this. I think he would almost throw up at some of the statements that are being made.” For his part, Mulroney described the sessions as “just a beginning.” There were bound to be “mistakes and heartbreak before we get it right,” he added. “But I’m satisfied we’re headed in the right direction.” To that end, Mulroney announced that the first ministers had agreed to annual meetings and that the next one will be held this fall. 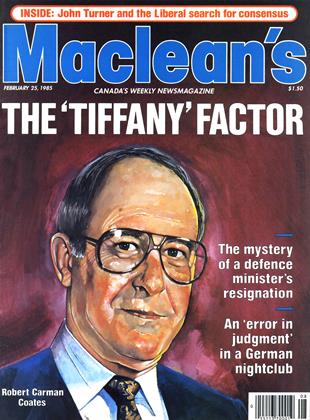