inauguration of the President and the Super Bowl. The two events, separated by thousands of kilometres, overlapped. The President—looking pretaped but fit—tossed the coin before the game began, and the game’s halftime show included all the patriotic clichés that Ronald Reagan has brought to Washington. After the game the President called the winners’ locker room and the coach passed along to him his congratulations and the prayers of his team. Canadians squirmed or sneered.

At the conclusion of Canada’s version of the Super Bowl the Winnipeg Blue Bombers received a telephone call from the Prime Minister, but when it turned out to be a hoax no one seemed to care. Canadians also remember Grey Cup halftime shows that consisted of young people in white tunics throwing beach balls into the air. And they remember the swearing-in of the new Turner government, an event that represented, for Canadians, a far greater change than Ronald Reagan’s second swearing-in did for Americans. Turner’s swearing-in was accomplished, without the presence of television cameras and reporters, who were told to wait in the hall. Only the reporters complained.

As Canadians, our consensus position is that we are above the sort of thing Americans do. Yet it is possible that many Canadians feel a touch of envy at the readiness of Americans to celebrate themselves and at the ease and comfort with which they do so.

Americans have no hesitation in dressing themselves up as pilgrims and puritans, as Uncle Sam and Davy Crockett. Pick a day—July 4, Super Bowl Sunday, Thanksgiving, the birthdays of any number of presidents—and the Americans are ready to hang the flag from the front porch. Canadians don’t do that. There is July 1, a Remembrance Day we share with our allies, an earlier Thanksgiving Day to which no pageantry is attached, and that’s about it.

Americans have even been able, although a certain amount of fuss accompanied the effort, to create a new holiday, the birthday of Martin Luther King. So vague and undirected are our patriotic spirits that even when we decide that we want a national holiday, we can’t decide what to call it, whom to name it after. The national holiday we

again won't celebrate this February is to honor Sir John A. Macdonald. At the moment the most popular name for the proposed holiday is Heritage Day.

“Heritage” is a nice word, like “Mom” and “apple pie,” but there is nothing Canadian about it, no celebration of any of the things that make us unique. The cynic butts in here and says: “I know why. It’s because there’s nothing unique about us. We’re just Americans, only colder and with fewer guns.”

It’s true that many of us watched the Super Bowl. But cynics are not always right. Nor is it entirely correct to say that Canadians don’t celebrate themselves because they are just not that sort of folks—that Canadians are reserved, modest, calm people, not given to making a fuss. Many of us are like that, but not all. In fact, the stereotype may apply only to the Ontario WASP.

While some make excuses for our inability to celebrate, others find in that

‘In Canada there are still those who will not forgive Sir John A. for being a Torg or Laurier for being a Grit9

inability a reason to celebrate. They look at the American celebratory process, the cornball sentimentality; they observe the bad things—the wars, the witch hunts—that are carried out in the name of patriotism, and they are glad we don’t seem to have a lot of it.

But assume, for the moment, that you can have patriotism without invasions, that you can have warm feelings about your country without singing the national anthem before every bingo game. Assume, also, that there are things to celebrate in Canada. How do we go about doing it?

An important way is to make history more accessible. For Americans, Washington is as politically detested as Ottawa is by Canadians. Yet Washington is also a shrine for Americans who want to learn about the nation’s history. During the summer and at every school break, the parking lots of the American capital are full of school buses. The tourist attractions are full of parents leading children through a nation’s history. Most of the sights—the White House, the Capitol building, the Supreme Court, the monuments, the major mu-

seums—are within a brisk walk of one another. The museums are full of objects that bring history alive—Washington’s teeth, Judy Garland’s shoes, films of dead presidents, recordings of forgotten pop singers.

Canada has fine museums too, including several in Ottawa, but the capital city lacks the equivalent of Washington’s Mile of History. The Canadian looking for his Mile of History is forced to take many kilometres’ worth of taxis. The landmarks—particularly the museums and galleries—are scattered all over the map. A new Museum of Man —which will not be called that out of deference to those to whom the present name is offensive—will be constructed in Hull, across the river. A badly needed new National Gallery will be built, but it will move from its convenient current location to a new place a long hike from Parliament Hill, a taxi ride from the Supreme Court but close to the National War Museum (the name of which no one is proposing to change).

We will have to wait for the current generation of museums, as well as those under construction, to fall down before we can make our history more handy. In the meantime, there is another project for us—namely to create, retroactively, the kind of heroes whose teeth we want to look at in museums.

Here again, the Americans know how to do it. With the passage of not too much time, the Americans forget the blemishes of important men. Hardly anyone remembers that Lincoln was a Republican. Those who do don’t mind. There are still people alive who remember Franklin D. Roosevelt and hate him, but it won’t be long before Roosevelt becomes an icon, worshipped by all Americans regardless of party, regardless of ideological orientation.

In Canada there are still those who will not forgive Sir John A. for being a Tory or Laurier for being a Grit. As for Louis Riel, perhaps the most colorful figure in our past, many Canadians disapprove of him. As a result, they don’t want to know about him.

Because Canadians insist on being so rational about their history, the statues don’t go up too fast. The memory of a man like John Diefenbaker may be honored in a particular region, but the nation as a whole reserves judgment.

At the very least, this makes for boring halftime shows. 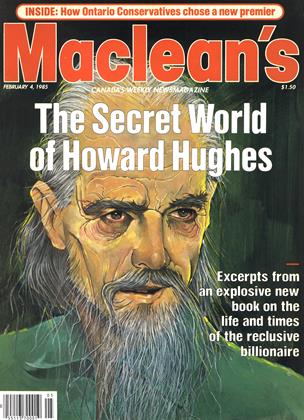