They sometimes use secret methods of detection, but the people known in the oil industry as “the KMG cops” are neither sleuths nor spies. They are auditors from the Dutch firm Klynveld Kraayenhoff & Co. (KMG), and since Jan. 28, 20 of the international firm’s 2,000 employees have been examining documents in the 13 member states of the Organization of Petroleum Exporting Countries (OPEC). The cartel, which supplies one-third of the world’s oil needs, is trying to preserve its unity by assigning KMG to find out which countries are cheating on the organization’s pricing system and production quotas. OPEC has no plans to publicize the names of offending countries, but officials from the member states contend that the embarrassment of exposure will at least reduce cheating. Said OPEC spokesman James Audu in Vienna: “When a producer realizes that his accounts are now open to independent audit, he might be less tempted to pull a fast one.”

Still, expert observers, including John Thompson, a partner and senior oil analyst with Fielding, Newson-Smith and

Co., London-based stockbrokers, say that KMG—which may be receiving as much as $1 million a year to monitor the cartel—faces a severe disadvantage. Added Thompson: “KMG has a virtually impossible task, because it will have to depend wholly on the goodwill of member countries.” Indeed, KMG is the second firm to take on the difficult task of monitoring OPEC. Last December the cartel fired the Cambridge,

Mass.-based consulting firm of Arthur D. Little after the company had worked for the oil producers for more than a year.

Saudi Arabian Oil Minister Sheikh Ahmed Zaki Yamani alleged that the consultants had not provided accurate information—although the cartel’s market monitoring committee had refused Little access to key OPEC statistics. And other industry experts say that there are many hid-

den ways for determined cheaters to flout OPEC guidelines. Among the methods: offering customers secret discounts; bartering oil for goods (with the oil subsequently sold at spot-market prices, which are lower than the OPEC marker price of $28 U.S.); or refining crude oil on the spot and selling it as a different product. Said Carol Ferguson, director and chief oil analyst of the Edinburgh-based brokerage firm Wood, Mackenzie & Co. Ltd.: “Without exception all OPEC countries stand guilty of having resorted to one device or another to sneak oil through the back door.” The devices have multiplied rapidly in the past several years. Sagging oil demand has cut OPEC revenues to $150 billion last year from an estimated $275 billion in 1980. Indeed, Nigeria, whose oil revenues have declined by half in the past four years, last October openly defied OPEC by cutting the price of a barrel of light crude by $2. In an attempt to control output and dictate its price to the world, OPEC cut its total production quota to 16 million barrels a day last fall—a 1.5-million-barrel drop. Then, in January it slashed the official rate for Saudi Arabian light crude—the OPEC benchmark price—to $28 (U.S.) a barrel. But the cartel’s uneasy solidarity weakened when three members—Algeria, Libya and Iran—refused to adopt the new price and Gabon abstained from voting on the proposed system.

Still, KMG’s examination of the records and Yamani’s declaration that overproduction will lead to further price drops may convince most members to observe OPEC quotas. Said one analyst with the London stockbroking firm Scott, Goff and Layton: “Assuming the full facts are uncovered, OPEC will at least know which members to lean on.” As KMG began work last month, cold weather in many countries added another confusing element, creating a temporary demand for an additional four million barrels of oil a day. Wood, Mackenzie’s Ferguson noted that oil company reserves filled half that need, with OPEC supplying the rest—exceeding the cartel’s daily quota in the process. Said a KMG spokesman: “Many people imagine that we put meters on pipelines and set off in gum boots and leather gloves for the most remote wells. It is much more a job of poring through documents to see that everything adds up.” If the figures I do not add up satisfactorily, OPEC may again the threat of disintegration.^ 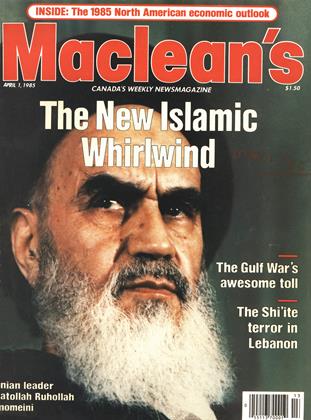