They are dimmer now, and fainter. But the stark images and defiant slogans of the Vietnam War still linger: the last American helicopter to lift itself from a frightened and beaten Saigon on April 30, 1975, 10 years ago next week. Hell, no! We won’t go! The obscene sprawl of massacred civilians at a South Vietnamese village named My Lai. Ho! Ho! Ho Chi Minh! The cold-blooded execution, by handgun, of a member of the Viet Cong during the Communists’ 1968 Tet offensive. One two three four! Tricky Dickie stop the war! Former president Richard Nixon, under virtual siege in the White House by the young people of the United States, explaining to a television audience how he planned to win in Vietnam by bombing Cambodia. Two four six eight! Stop the war, smash the state! The street riots during the 1968

Democratic party convention in Chicago, which followed Lyndon B. Johnson’s war-induced decision to retire. Hey, hey, lbj! How many kids did you kill today? Huge B-52 bombers, raining death and destruction on the lush and treacherous countryside of Indochina.

The images are almost infinite in number. And, like the pain that went with them for so many Americans, Vietnamese, Canadians and Australians who fought there, they have survived the passage of time, perhaps because originally they were so vivid. To watchers of television and readers of magazines and newspapers, the Vietnam War was long lines of stunned refugees limping south as the North Vietnamese army began its final push. The war was Buddhist monks setting themselves on fire in the streets of Saigon, protesting the presence of U.S. troops. It was hundreds of thousands of young Americans, demonstrating peacefully outside the White

House while Nixon watched a college football game on television. It was glib U.S. military officers, straining media credulity to the breaking point with distorted Viet Cong casualty figures and inflated tales of successful missions by U.S. and South Vietnamese forces. It was napalm and gunships, rice paddies and black-clad peasants. And to at least some music lovers, the Vietnam War was protest songs—some of which still drift by, in Bob Dylan’s phrase, “blowin’ in the wind” a generation after they were first performed.

From the beginning, the conflict in Vietnam amounted to nothing less than human tragedy on an epic scale. Its cost in terms of lost and uprooted lives, wasted money, ruined property and collapsed pride defies meaningful calculation. Its benefits, if any, remain

obscure. And its principal lesson—that using military force in a remote and hostile environment to support questionable diplomatic objectives can lead to disaster—may still not have been grasped by the world’s superpowers.

The Soviet Union’s five-year campaign to control Afghanistan, using airpower and roughly 100,000 troops against guerrillas, indicates that Moscow has ignored the U.S. experience in Vietnam. And many Americans say they are concerned that President Ronald Reagan’s administration may eventually embroil their country in a Vietnam-like adventure in Central America. Said Leonard Boudin, a Stanford University law professor who defended such antiwar activists as pediatrician Dr. Benjamin Spock and Rev. Daniel Berrigan, as well as Daniel Ellsberg, in the so-called Pentagon Papers case: “We came off badly in Vietnam

and we are repeating our mistakes with no justification in Central America.”

A decade after its final victory, the Communist regime in Vietnam is impoverished (page 43). It is partially sustained by Soviet aid, intermittently embroiled in border clashes with Chinese forces, and it maintains an estimated 180,000 troops in Kampuchea to support a puppet regime in that country. As well, Hanoi is widely discredited among the South Vietnamese, whom it claims to have liberated. Even former admirers of Hanoi have expressed misgivings.

Said Jerry Rubin, a former U.S. peace activist and one of the defendants in the celebrated Chicago Seven trial:

“We were wrong to eulogize the North Vietnamese. But we needed good guys and bad guys then.”

Hubris, as well as the “domino theory,’’ which forecast a totally Communist Indochina if North Vietnam prevailed, led to the rapid U.S. military buildup. And Washington’s firm assurances of unending support for the South Vietnamese government helped to prolong what, in military terms, was a lost cause and, in human terms, a catastrophe. During the eight years between 1965 and 1973, when U.S. military involvement was at its peak, the Vietnam

War claimed a total of 1.9 million lives and created nine million refugees. Among the American people, who lost 58,022 dead and counted 300,000 wounded, it generated anger—and rivers of tears.

For most Canadians the long conflict was an alien and often baffling drama that unfolded either in hills and scrublands on the far side of the world or on the streets and campuses of their closest neighbor. The war’s huge cost, its savagery and—ultimately—its futility were all but incomprehensible to those on the sidelines. Still, many Canadians tended to sympathize with the aims of the U.S. peace ¡= movement, as did the Liberal government of *r - Pierre Trudeau.

espite the war’s unpopularity, roughly 20,000 Canadians, most of whom wanted adventure or a paycheque, fought for the American armed forces in Vietnam. Said Douglas Pye, 35, a part-time ambulance driver in Fergus, Ont., who enlisted in the U.S. army as an 18-year-old and who subsequently became a member of the 82nd airborne division: “The recruiter welcomed me with open arms. I didn’t know what I was getting into.” At least 54 Canadians died in action, and two

were listed as missing. One of those was Arthur Diabo, also 35, a Canadian Indian from the Caughnawaga reservation, eight kilometres south of Montreal. Diabo, a former U.S. Marine, was wounded twice in less than five months in 1968, once during the Tet offensive, and he is now in the forefront of a campaign by Canadian veterans of the American armed forces to gain full U.S. service benefits. As an officer of the Montreal chapter of the Disabled Veterans of America Association, he is attempting to reverse U.S. government policy, which denies—among other things — medical and vocational rehabilitation benefits to non-Americans living outside of U.S. territory. Said Diabo: “The draft dodger made out pretty good with Washington and so did the Boat People. But the Canadian Vietnam vet is not doing so well.”

At the same time, Canada provided safe haven for a veritable army of nonfighting men from the United States (page 44). Tens of thousands of draft dodgers, many of them well educated and sincerely opposed to the Vietnam conflict, streamed north from the cities, towns and farms of a divided America. As well, thousands of deserters from the U.S. military crossed the border rather than risk having to cross the Pacific. (The combined total of dodgers and deserters who came to Canada is estimated to be between 50,000 and 80,000.)

r| or their part, the young Americans—many of whom settled in, and enriched, such cities as Vancouver, Toronto and Montreal —left behind their families and friends without knowing whether they would ever be allowed to go home again. To many Canadians that sacrifice seemed to constitute a special kind of bravery. After the U.S. withdrawal from Vietnam, former president Gerald Ford offered a partial amnesty in 1974. Two years later Ford’s successor, Jimmy Carter, offered a general pardon. Still, as many as 20,000 decided to settle permanently in Canada, a country that had provided refuge while they waited for an affirmative answer to the 1969 song/prayer recorded in Montreal by John Lennon and Yoko Ono, Give Peace a Chance.

Through much of the war, Canada played a low-key but occasionally important diplomatic role in Indochina. With Poland and India, Canada was a member of the International Control Commission (ICC), which was set up in Geneva in 1954 to supervise peace in the region after the collapse of French military influence at the battle of Dien Bien Phu. In the early stages of the HanoiSaigon conflict, before U.S. troops began moving into Vietnam in strength, the ICC had only limited influence. Later, it had virtually none. Still, ICC member-

ship occasionally allowed such Canadian diplomats as Blair Seaborn, now security adviser in the Privy Council Office in Ottawa, to visit Hanoi and, occasionally, to carry messages from Washington to the North Vietnamese. Seaborn said he carried two messages — in June and August of 1964 — which he delivered personally to Premier Pham Van Dong, the second most powerful North Vietnamese politician, after Ho Chi Minh. Added Seaborn: “The messages from the United States said that they did not want to become heavily involved in the Vietnam conflict but that they would have to unless some

accommodation could be made.”

Within a year Lyndon Johnson began dispatching an American expeditionary force that would ultimately grow to a half-million men—and the undeclared war was under way. It quickly became the most thoroughly reported—and photographed—war in history, both on the battlefield and on the increasingly agitated U.S. home front. Among correspondents who brought battle scenes into the living rooms of Main Street, North America: Toronto-born Morley Safer, now of the CBS program 60 Minutes but then with the CBS Evening

News, and Michael Maclear, then with the CBC and more recently the producer/ author of a 13-hour documentary series and best-selling book, both of which were entitled The Ten Thousand Day War. But it was a series of critical eyewitness accounts from Vietnam by CBS’s highly respected anchorman in 1968, Walter Cronkite, that most fuelled the antiwar movement.

Viewers were fascinated and, frequently, appalled by the graphic and occasionally grisly images which television delivered. And many U.S. politicians began to view the news media as an enemy of the government. Chief

among them: Nixon, who this month published a new book, No More Vietnams, in which he repeats his contention that the media cost the United States victory in Indochina. The thesis gives too little credit to the fierce determination of the Vietnamese—and to the essential decency of millions of young Americans who thought the John Lennon-Yoko Ono peace prayer made sense.

With Bill Gladstone and Douy Clarke in Toronto, Terry Hargreaves in Ottawa, Bruce Wallace in Montreal and Ian Austen in Wish ington. 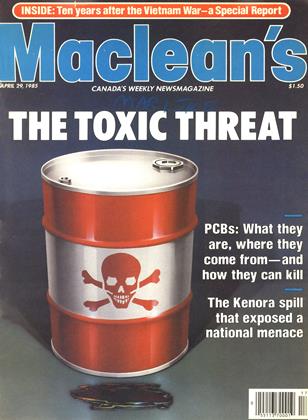